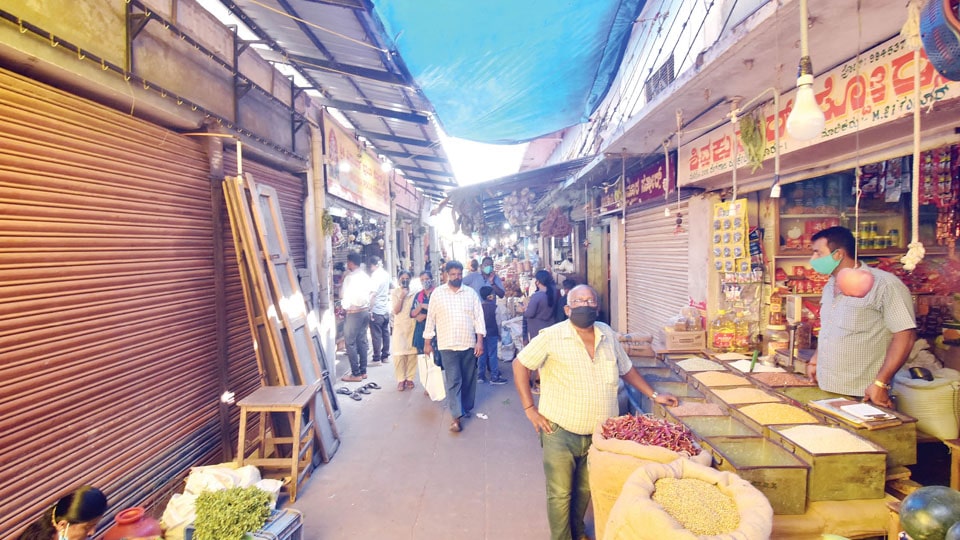 Mysore/Mysuru: Fruits and vegetable vendors of three city markets have urged the Mysuru City Corporation (MCC) to allow them to function from 6 to 10 am with re-implementation of odd-even rule in all markets of the city.

The MCC had passed the odd-even rule on Apr. 23. Under the system, odd- and even-numbered shops in Devaraja Market, Mandi Market and Vani Vilas Market were allowed to operate on alternate days according to their numbers. But on May 4, the vendors had been asked to shut down their businesses.

Speaking to Star of Mysore, Devaraja Market Tenants Association President S. Mahadev said, “Last month, MCC had implemented the odd-even rule and allowed our vendors to function in all markets of city including Devaraja, Mandi and Vani Vilas Markets, but later, all of a sudden the shops were asked to shut down. Without business, traders and vendors were facing a lot of difficulties. We would urge the district administration to review its decision and allow us to function from 6 am to 10 am as earlier.”

Vegetable vendor Naveen of Devaraja Market said, “They have allowed supermarkets to function but not us. The State Government has not yet announced any relief package for fruit and vegetable vendors. All vendors here are from poor families. We are earning our bread and butter by selling fruits and vegetables. I request the authorities to reconsider its decision and allow us to sell our products here. We will certainly take all necessary precautionary measures as per the guidelines issued by MCC such as maintenance of social distancing among customers.”

READ ALSO  No Aadhaar, No Cremation

Devaraja Market Mandi Market Mysuru City Corporation Vani Vilas Market
Free food at city’s 11 Indira Canteens till May 24
Vaccination: Booking over for 18-plus till May 17