Home » Columns » A train-ride to remember 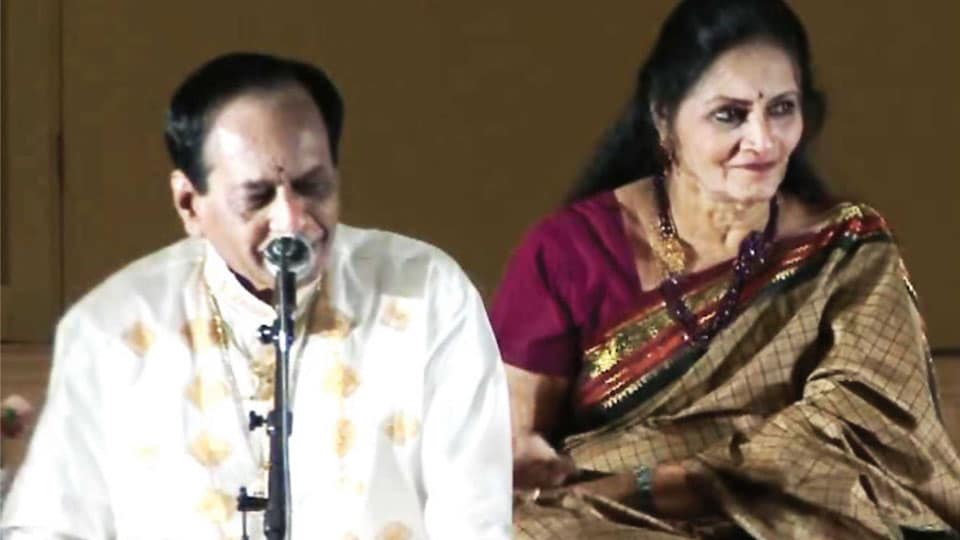 Six years ago I entered the chaotic Chennai Central Station to board the Shatabdi Express to Mysuru. Up ahead at the entrance to my bogie I saw people bending down to touch someone’s feet and many standing with reverence reserved for Godmen or politicians.

I squeezed myself through the small mob and got into my seat waiting to see who this celebrity was. But no one of that ‘celebrity’ stature came through. The closest was a traditional South Indian dothi-clad gentleman with a shiny watch and an elegant looking lady followed by a well-dressed man. The trio sat ahead of me somewhere while I sat there munching on Marie biscuits and went back to my book.

Soon I slipped into a coma only to be woken up by a waiter who came around offering water and more biscuits as Bengaluru was approaching. I sat again nibbling on a Marie biscuit when I noticed people walking back from the wash-room, stop at a particular seat and then lean in to talk to the person sitting in that seat or bending to touch his feet.

Now, I was intrigued and stood up for a mock stretch to see who was in that seat. It was the dothi-clad gentleman I had seen earlier. Now I immediately recognised his face but could not recall his name. I knew he was a legendary singer with a very different voice. I also remembered him from the famous national integration initiative song “Mile sur mera tumhara” music video.

No, it was neither Bhimsen Joshi nor Hari Prasad Chourasia. And then it came to me: the person sitting ahead of me was the revered Carnatic vocalist, Dr. M. Balamuralikrishna. I walked up to him and introduced myself, had a little chit-chat and excused myself as I didn’t want to be too intrusive.

Soon our train headed towards Mysuru and the crowd in the train was thin. As we passed Kengeri, Balamuralikrishna was heading back from the wash-room and on his way back walked up to my seat to chat and then suggested I join him and his lady friend Dr. Saraswathi…for more biscuits.

From the very start, I realised Dr. Balamuralikrishna had a sense of humour as he introduced Dr. Saraswathi saying: “This is Dr. Saraswathi, my friend and manager. As you know Saraswathi can make her veena sing, so I am like her veena; wherever she directs me, I go and sing.”

After chatting about things in general, I finally asked him a question that was niggling at the back of my mind: Whether it was true that Bhimsen Joshi consumed considerable amount of alcohol before performing? I wanted to know this in order to verify my father’s claim that when he lived in Pune, he used to deliver rum bottles to Bhimsen Joshi. The reason my father was requested for the bottles was because he had access to cheap liquor from the army canteen. Back then I couldn’t quite believe it. Now, here was my chance to hear from a person who had performed many times with Pandit Joshi.

Balamurali smiled and said, “Yes, quite a considerable amount actually. But, back then, it did not affect his performance at all; in fact, maybe, it enhanced it.” Then he continued, “What is amritam, the nectar of Gods? It is nothing but alcohol; in small amounts it is nectar and in large amounts poison.”

The mention of Gods was the trigger for my next question. I asked him if he performed a lot in temples. He replied, “I like to sing, I don’t care where I sing. Moreover, I don’t sing for the Gods, I sing for my people. I see God in people and mother nature.”

He then continued to talk at length about God and people’s obsession with religion and worship. At one point he said, “Look at the inventors. Man-made medicine, man-made aeroplanes, man also made this train we are travelling in. Isn’t it so amazing that someone thought this was possible and made it happen? We should pray for the good of such people, people who make life better for others.”

Balamuralikrishna himself falls in that special category. He has brightened the lives of millions of people across the country — both music-lovers and ordinary people.

Finally I found it appropriate to ask if he had seen the new “Mile sur mera tumhara” music video. He said he had not and asked me how it was. I was critical of it, to which he replied: “Well, at least they tried something new. Maybe they can do it differently next year. There must be change.” And then added with a mischievous grin, “Hopefully, next time they can please you.”

READ ALSO  Aspiring doctors can take up NEET in Mysuru too

No wonder he was the only legendary performer who said there was nothing wrong in fusion music and added “addition to tradition” is important and natural.

As we alighted from the train, a few people who recognised him, came and took photographs with him, some diving right onto his feet. I asked his companion Dr. Saraswathi if all this adulation irritated Dr. Balamuralikrishna, to which she replied that recently at a packed concert, some fans tried to slowly pluck some of his hair to keep as memorabilia.

Balamuralikrishna himself narrated an incident where once his footwear which he had left beside the stage was gone when he came down after performing. Months later, he got a letter from a fan who confessed that he just wanted to have a memorabilia and so stole the slippers. The fan then said he would return the slippers but requested Balamurali to give any small item that he had used.

As we parted ways in Mysuru, I felt for a man who is deep into an art-form like Carnatic music known for its rigorous discipline and purity, he is refreshingly different. He is humorous and open-minded. He is like all great musical geniuses, a free spirit.

I was humbled by his humility and also glad that he wanted to meet me again. I did meet him again in Dasprakash Paradise Hotel, but unfortunately I didn’t take any memorabilia…guess now that he is gone his music is all the memorabilia one needs.

Meanwhile, I was also saddened to learn that the lady who was with Dr. Balamuralikrishna, Dr. Saraswathi too passed away on 13th July 2013. She was the Artistic Director of Vipanchee Natyalaya, Chennai, of which the Founder-Director was Dr. M. Balamuralikrishna.