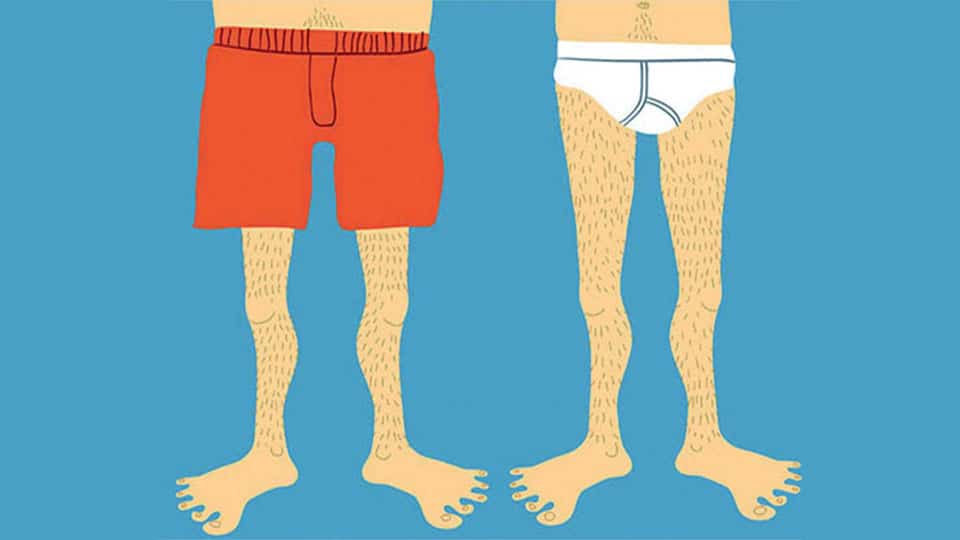 Boxers, the new nightie for men!

Yesterday morning as I was walking up Chamundi Hill along the parapet, up ahead, I noticed another morning walker enthusiastically walking down with a spring in his step ON the parapet! I found it quite dangerous. What if he fell off to the side?

Just as we were about to pass each other he stopped, turned and bellowed, “Good morning, haven’t seen you around. Not rising up early anymore?”

I turned around a little startled! Oh! it looked like he had no problem rising up early…and a certain part of him looked like it was still trying to rise up. It’s just that when he spoke to me he was standing on the parapet while I was at the road level, and when I turned to talk to him I was facing his crotch!

This man was just wearing thigh length ‘tights’ and was comfortably “hanging out.” It was not a pretty sight. Tights or ‘compression clothing’ are usually worn by serious athletes for faster muscle recovery and mobility. Normal people usually wear tights with shorts on top to stop chafing in the thighs when they run and they wear it in the gym so ladies are not embarrassed by the glimpse of ones gleaming jewels. So as this man stood there I instantly stepped back, mumbled something incoherent with a petrified look and walked away, like I had seen a snake.

Now, quite a few men can been seen wearing just tights and it’s a kind of gross for others to see contours of their manhood but then women do it too. Women wear tights or leggings everywhere from the gym to the mall. May be men should have the same freedom of movement.

Hell they could even throw in banana or cucumber, just to show off. And if women stare, then men should give the same look that women give them when they stare at a cleavage that has been hanging out for the world to see. If women complain men should give them their own retort — “You are being a sexist, a perv and a self-righteous prude.” Guess compression clothing for men is our moment of ‘emancipation.’

Jokes apart, off late men too have turned some of their inner wear into casual wear. We all know the legendary uses of nightie, the dress that women wear to sleep, to drop off their kids, to walk and what not…

It is indeed the most liberating clothing anyone can ever wear. But it is also an eyesore…especially when car lights hit the nightie walker from front and the people behind have to look away from the unflattering silhouette. It also can be a spicy dress…no we don’t mean sexy, we mean it lets us know what you’ve cooked for the day. Worse is when some mothers put a drawstring at the waist and tie a big knot with a bow and think …viola! The nightie has turned into a casual gown! In fact a few years ago its use was so ubiquitous that if a foreigner spent a few days in city, they would think nightie is our national dress.

Of course, while the women these days are giving up on nightie, instead choosing pajamas and track pants, the modern desi men have found their version of the nightie — Boxer Shorts. And like women they are wearing it everywhere.

Boxer Shorts are short length and loose shorts with extremely elastic waistband. It is actually an undergarment for men. It gets the name because it was designed for boxers who needed unhindered leg movement. While the original boxer shorts were long and loose this one is short and loose and so cannot be for public use.

But then when men find something that will keep them cool and give them easy access to indulge in primal activities such as scratching themselves, they will buy it, use it and use it everywhere. While men want women to be modest in their garb, men will go to any lengths to be comfortable while making others uncomfortable…and so boxers have become the new nightie.

Especially in holiday resorts men with boxers are all over the place airing themselves out, it makes one feel like you were visiting a snake park. No wonder even Windflower Resorts in city on its room key card has a printed request saying “Kindly wear appropriate clothing in dining area.” When asked why they had to put this, the management said that they got too many complaints from women guests that men wearing boxer shorts and sitting cross legged was not only awkward but also killed their appetite.

Men have another reason not to wear boxers in public because unlike men who get all jittery when they see lady parts, women have a different take on man parts. While they sure love to see a 6 pack ab, a glimpse of your reptile staring out of the darkness will make her screech in horror and run away in disgust.

But what is disturbing is that most of these men wear boxers that have colourful prints such as cupcakes and cake slices? Are they trying to attract fat girls or send a message that they’re hiding something edible? Worse are the ones wearing boxers with prints of cartoon characters and super heroes… Well, what if a kid pulls down the boxer and cries ‘I want it.’

But the worse will be if you meet a hyper-feminist and she appreciates your man-show like how indecent men appreciate women…by grabbing them. And she may even give the same excuse men do…. “she was just asking for it.”

Of course, for many years it was said that tight briefs are unhealthy as they do not let your sperms take flight as the temperature in the cockpit was increased due to constriction. But this has to be false as most Indians wear briefs and we are an overpopulated nation…unless, of course, the Andar ki baat is that Indian men have not been wearing the Andar ki baat at all.

Anyway nowadays there is a compromise as they have something called boxer-briefs — it’s closed up but made of very elastic material. In fact, over the years many types of inner wears have been designed for men, based on women’s wear! While women have thongs to be worn with trousers to hide lines, now even men have it! Women have bikini, now men have mankini !

But for now, may be like most women who gave up wearing nightie like causal wear, it’s time men stopped wearing boxers in public. It’s rude, vulgar, scary and plain bad etiquette. And all the “athletes” who just walk around in tights, please wear shorts over them, no one likes to see junk in a trunk early in the morning.