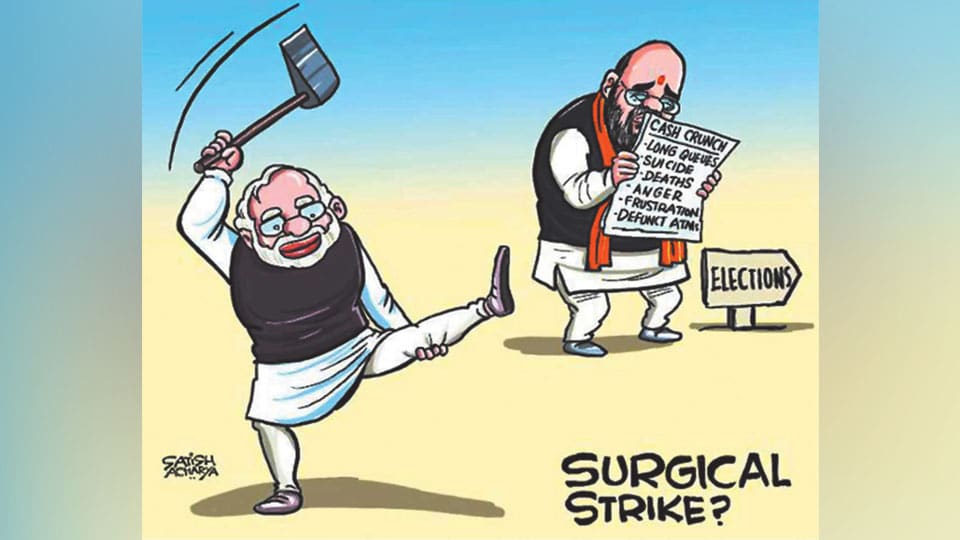 The recent demonetisation has been confusing…we have assumed that war against currency is war against black money. Money or cash constantly changes colour from black to white. It is ok as long as it is circulating within the economy, but money truly becomes black and harmful when non-tax paid cash is hoarded and not circulated which means even indirect tax in the form of VAT and Sales Tax cannot be collected.

In simplistic terms, when we withdraw money from an ATM it’s white, when you give it to a labourer it turns black, as he does not pay tax. But when the labourer goes and buys a biscuit packet for his child he pays value added tax, so part of it is white again.

Even in the US, this constant movement of currency from black to semi-white happens. From the dollar bills stuck in the glitzy thongs of strippers to hot dog vendors on the streets of New York, there is constant cash transaction. In fact, it was reported that USA’s black economy in 2012 was two trillion dollars, the size of our nation’s GDP! The US is trying to control this by constantly trying to update their laws, effectively implementing it and fixing legal loopholes.

Now, we may say many poor have deposited tax evaders’ black money into their account, but since the banks have accepted it, this money has become white. Later, when the government relaxes the rules of withdrawal these poor people will withdraw this money and cash goes back to the system. So are we to assume it becomes black again?

For now with demonetisation, the economy has taken a hit. Vehicle sales are down, farming is affected, interest rate on fixed deposits is down, interest rates on loans are still the same, slow layoff in small industries has already begun, campus recruitment has taken a hit and rupee is at an all time low. Was it worth it? Let’s see…

According to Bank of America-Merrill Lynch, India’s Black Economy is 25 percent of its GDP, which translates to about Rs. 38 lakh crore. Rs. 500 and Rs. 1,000 notes in circulation was Rs. 15.45 lakh crore. Now already around 10 lakh crore has come to the banks and since the government has not taxed this and accepted it into the banking system, it means it’s not part of the black economy.

Assuming that by December end another 3 lakh crore may come into the system with the new amnesty scheme, the government may get some tax money but still two-and-a-half lakh crore cash remains black, which will perish. So out of 38 lakh crores the government was able to get in 3 lakh crore black money and lay to waste 2.5 lakh crores of black cash which is just 14.47 % of black economy. Where did the other 85.53% of black economy go? It’s obvious that most of it is held in non-cash form such as gold and real estate. So may be the government could have got this 85.53% first with stringent land reforms, IT scrutiny and anti-corruption laws?

It has been 25 days since Rs. 500 and Rs. 1000 notes were demonetised and one can’t help but get that sinking feeling that maybe our Prime Minister’s war on black money is eerily looking like George Bush’s war in Iraq to unearth that elusive biological weapon which ended in chaos.

There is no doubt that Modi is the most impressive PM we have had in a long time. It is also obvious he wants to leave a legacy and be remembered with reverence like how Singaporeans remember Lee Kuan Yew, the leader who changed the face of their nation. But we cannot blindly praise even the mistakes that our PM and his select group of pundits commit.

Yes, indeed this demonetisation cannot be deemed a mistake or a failure as yet, but we must have the ability to freely debate it without being branded anti-national. How can criticising our government policy be anti-national? If anything, debating and criticising a government policy is a patriotic act as it helps generate new ideas which could create a better policy.

But no matter what century we live in, it seems our concept of ‘bhakti’ is confused with ‘shakti.’ We show ‘bhakti’ and tend to prove our devotion by crude display of ‘shakti,’ be it mob or cyber attack. Yes, we literally worship our heroes. Our latest obsession is PM Modi. It seems he can do no wrong. And we can never say anything that even remotely questions his “wisdom.” After all, he is our saviour. But hero worship is dangerous in a civil society because it blinds us from logic and rationale.

As Dr. Ambedkar said, there are two kinds of hero worship: One an unbounded admiration, the other blind and obsessive. He says, “The former does not take away one’s intelligence to think and act independently. The latter one makes a perfect fool. The former involves no disaster to the State. The latter is the source of positive danger to it.”

Now, we have to be able to at least accept that the implementation of this demonetisation has been anything but chaotic. After all, the very first interface between the citizens and the government when it comes to money itself was compromised as corrupt bank managers turned commission agents. We have to accept that our government, in order to catch a few sharks, immobilised millions of smaller fish in an ocean and in the end very few sharks were caught. For now, at least we can take solace that because of demonetisation, a few bureaucrats in their rush to convert their black money to white have been caught and with that, one big fish, our CM may very well be in trouble.