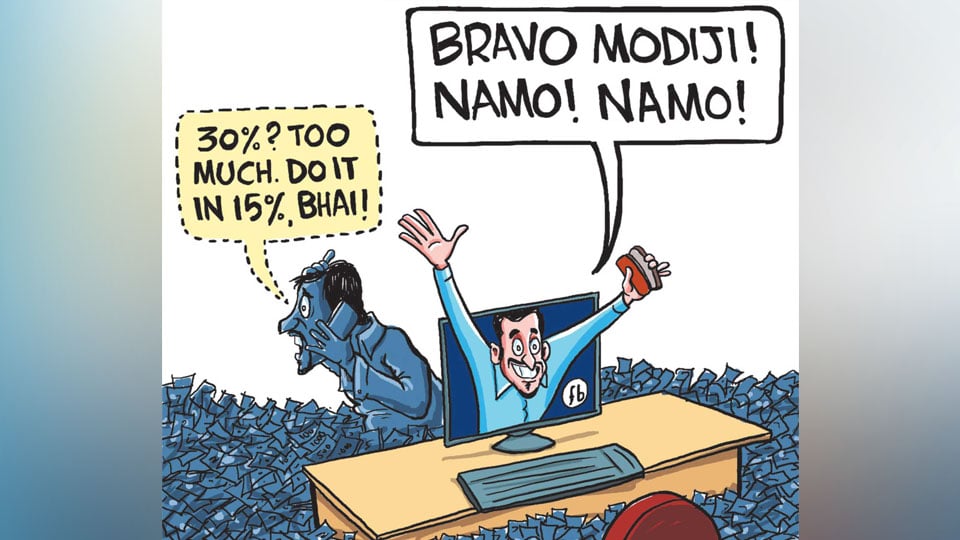 While our Prime Minister is telling us his Mann Ki Baat…people are busy with Money Ki Baat. And why not, we love money. We have always loved money.

And when it comes to money or benefit, the saying “means justify the end” is meaningless. We only care about the end. That is why we see some parents don’t care if their child cheated to get high marks. Instead they are proud that their child is ‘smart’ enough to cheat without getting caught.

We like the idea of “get what you want by hook or by crook.” And so now we have a nation filled with crooks. A country with too many dishonest citizens who respect people with money rather than with character.

Indeed corruption is not unique to India but its wide acceptance and prevalence among the common people is unseen in any other progressive nation. We’ve accepted corruption so much that we even advice foreigners to follow the same path like Dhirubhai Ambani advised Murdoch.

It seems, according to Edward Luce, an English Journalist, in the late 1990s Rupert Murdoch, the owner of Star TV Group, visited India to explore launching satellite networks. After meeting all the Ministers in New Delhi, he flew to Mumbai and met Dhirubhai Ambani. Dhirubhai asked Murdoch whom he had met in Delhi. Murdoch said he had seen the Prime Minister, the Finance Minister and others. Then Dhirubhai said, “Ah, you’ve met all the right people, but if you want to get anywhere in India you must meet all the wrong people.” Yap so ‘wrong people’ are everywhere now.

The recent demonetisation may have created a perception that only the bureaucrats, politicians and businessmen are corrupt, but the fact is even ordinary Indians are corrupt and dishonest. In 2012, former Chief Vigilance Commissioner Pratyush Sinha declared that 30% of Indians were totally corrupt, 50% borderline dishonest and just about 20% were close to being honest.

Now, while we vilify bureaucrats and politicians for being corrupt we have to ask why do politicians and Government Officers make so much money? Apart from the obvious reason of leading a luxurious life, most Government Officers indulge in corruption to pay politicians. The politicians, in turn, to stay in power, pay off the supreme master in a democracy — the voter. Yes, most of the Indian voters are corrupt as they take a bribe to vote, a sacred duty in a democracy. Even villagers whom we perceive as being innocent are dishonest.

A few years ago the Government had announced that it would pay for the toilets that villagers build in their houses. So one person in the village built a toilet and the rest took photo of that toilet and submitted it as their own. They had ‘adjustment’ with the Village Accountant, who was the inspecting authority. The village official got a cut for every toilet approved and the rest of the money villagers took home to enjoy while they continued to shit in the fields!

It’s not just the villagers or the illiterates who are corrupt; even the so-called bright young minds of corporate India are no better. Well-educated, well- dressed IT managers have been known to threaten restaurants to over-bill and pay the difference to them in cash, else they would not bring their team to the restaurant again!

The Facility Managers of big IT firms are notorious for taking kickbacks. It’s ironic that while some of the chief mentors of these IT firms spew words of wisdom and virtue all over the nation, their own employees are deaf to it.

This is happening in all professions. Journalists are indulging in paid news, farmers are injecting chemicals into their produce, milkmen are adding urea in milk, vendors are cheating with their weigh scales, citizens are stealing water and electricity from the government, students are cheating in exams, parents are helping their children cheat… it seems like every person is trying to cheat every other person.

It is obvious India has a ‘crisis of character’ on its hands. This reminds us of what an American Professor said after he heard Swami Vivekananda’s famous comment, “In your country it is the tailor who makes a man a gentleman, but in ours it is a man’s character that makes him a gentleman.” The Professor rebutted, “In today’s India, character is only an export item, not meant for domestic consumption.” Yes, the Professor is right, we are hypocrites. While we scream bravo Modiji on social media, in real life we are busy converting black to white.

Pavan Varma in his book ‘Being Indian’ rightly observed “the concept of morality and of high-minded principle is dear to Indians as a theoretical construct, but largely ignored in real life as impractical. And those who renounce the lure of power are worshipped not because their example is worth emulating but because they are in awe of the person’s ability to transcend the irresistible.”

So we guess that is why while we revere Gandhiji, we just don’t care to emulate him. We see Gandhiji’s character traits as being good only in theory, never to be practiced. In fact today we use Gandhiji’s name in a derogatory manner as we brand an idealistic person as foolish by mockingly calling him ‘Gandhi nan maga.’

Ah! how far we have fallen. Our patriotism is only limited to singing our anthem and national song. We forget that being an honest citizen is a much greater act of patriotism as it strengthens the nation and its pride.

For now, as long as we have Kaala Mann, we will continue to have Kaala Dhann — Demonetisation will not make better Indians, only punishment will.