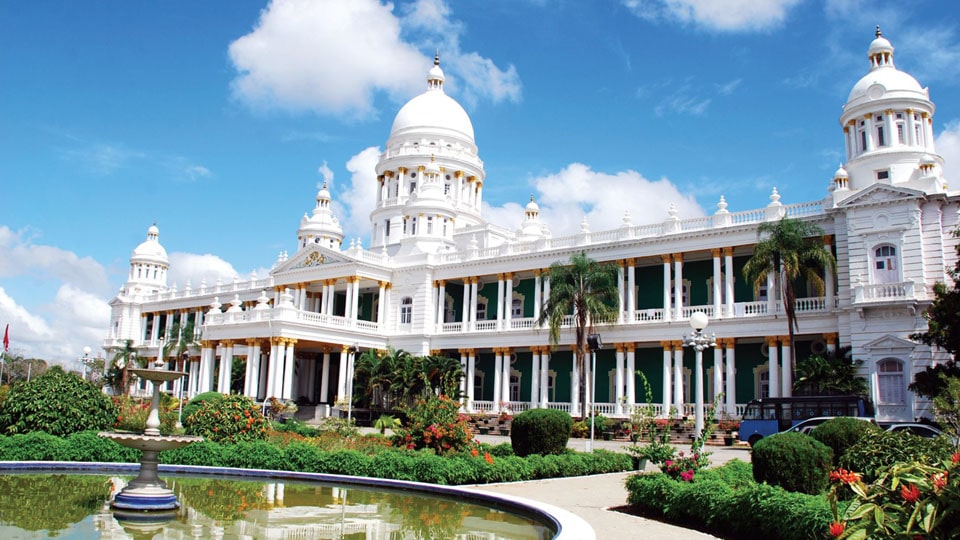 Two years ago out of the blue our then Tourism Minister R.V. Deshpande told the Karnataka Legislative Assembly that his Ministry would look into various violations committed by ITDC (India Tourism Development Corporation) and terminate the lease signed in 1973 with regard to Lalitha Mahal Palace Hotel. What were these violations?

It seems one of the pre-conditions of the lease agreement was to preserve the heritage value of the building and according to the Minister “ITDC has violated this condition. The Government has, therefore, decided to cancel the lease agreement.” This he said replying to a question from Congress MLA, who said “the Hotel Management by letting it out for marriages and other private functions posed danger to the heritage structure.” Whaaaat!?

Now, as we all know Lalitha Mahal has not only been hosting marriages but also allowing film shooting since 1973. Our question is, why are our leaders, after 42 years of silence, now suddenly concerned about Lalitha Mahal Palace? Haven’t these Ministers and MLAs been attending weddings at Lalitha Mahal since decades and visiting film stars when they are shooting at the Hotel?

Also the Minister did not mention what kind of damages have been caused and neither has the Archaeology Department, which is in charge of Heritage Buildings. So why this sudden interest in the “structural integrity” of the good old Lalitha Mahal Palace Hotel?

Earlier, after hearing that Lalitha Mahal Palace would be privatised I wrote an article titled ‘Lalitha Mahal Privatisation: Corrupt already salivating?’ Now with news doing the rounds that the son of a rich and powerful Minister in the government is vying for the property, guess my article was prophetic.

Of course, now the Royal Palace Hotel is a Royal mess, but it was not always like this. According to Arun Shourie, the man in charge of divesting in the NDA government, in his book ‘Governance and the sclerosis that has set in’ says, “In 2002 when a case was made to divest hotels under ITDC, Lalitha Mahal Palace Hotel in Mysore was the only ITDC Hotel in the whole country that was making a profit.” In fact, it remained profitable but not for long, thanks to the 6th Pay Commission and the trouble in fixing infrastructure problems.

With the introduction of the 6th Pay Commission, a dish-washer in Lalitha Mahal was paid Rs.18,000 ! And a receptionist Rs.45,000! If this is the pay structure, how can a Hotel make profit?

The other reason is the inability to upgrade the rooms. Even for a small plumbing work, the Hotel had to get permission from the State Tourism Department! Why? Because to fix the old pipes one had to remove the tiles. And tiles were deemed heritage!

Then there was the menace of bureaucrats and Ministers treating ITDC as their private club. In fact, according to news reports, BJP’s Ananth Kumar, who when he was the Tourism Minister had shifted the Junior Chef of ITDC Hotel Indraprastha in Delhi to his residence for two years! Yes, Karnataka’s face in Delhi had turned a professionally trained Chef into his personal cook! And this cook apart from his salary was paid 12-hour over-time everyday as he stayed at the Minister’s house. Who paid these bills? The tax-payer, of course.

Now, divesting a government property is not easy. There is the Union issue, then the typical government institution problems — unpaid bills to suppliers, unpaid taxes, disputes with other government arms, lack of proper property documents etc. These issues can be fixed and properties can be made ‘sale’ ready, but from a tax-payer’s point of view, we wonder if they can escape the temptation of corruption — bid fixing.

Lalitha Mahal Palace Hotel belongs to the Government of Karnataka. ITDC lease ends in 7 years. The present government wants to force an early end to the lease. But considering that Karnataka is rated as one the most corrupt States in India, we can expect match-fixing. And Lalitha Mahal may NOT go to Hotel Companies like Taj Group or ITC, who have expertise in handling heritage hotels, and instead will be handed off to people who can afford to pay the leaders more in black than they pay the government in white.

Or even worse, if it’s given to one of the rich political cronies, they will turn Lalitha Mahal into a harem for politicians. Let’s pray a reputed Hotel Group with expertise in heritage hotels is given preference so it can restore Lalitha Mahal to its original glory.