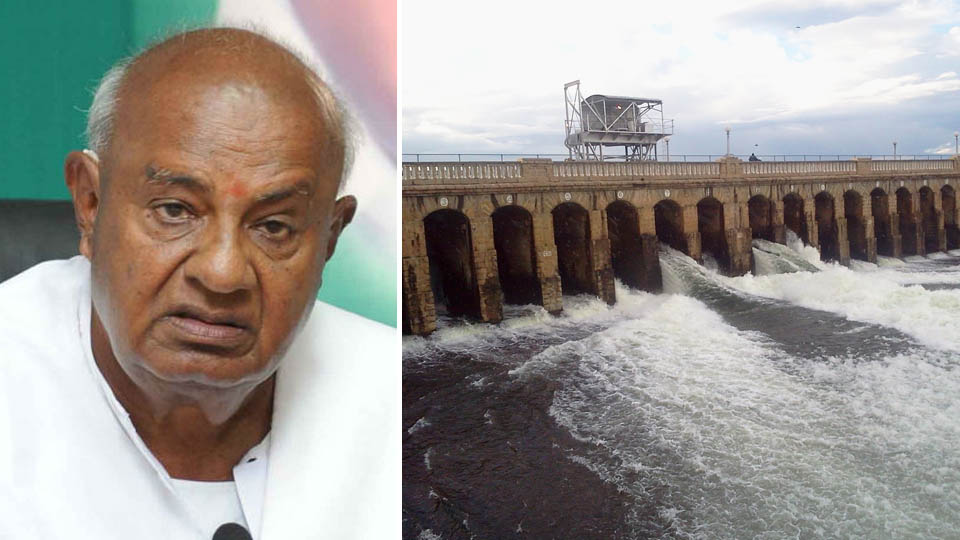 Bengaluru:  Over ten days after the Supreme Court verdict on the vexed Cauvery dispute, JD(S) patriarch H.D. Deve Gowda yesterday said mere allocation of excess water was not good news for Karnataka as it could neither be diverted beyond the basin nor utilised for crops.

He told the media here that though Bengaluru was not identified as part of the Cauvery basin, the State government has commenced announcement of packages to parched areas.  He questioned: “We should have got 40 tmcft water, but we got only 14 tmcft of additional allocation. What is there to celebrate by distributing sweets?”

He urged the State Government to consult legal experts and take measures to stop formation of the Cauvery Management Board. Gowda said the Board’s formation is not in the interest of the State and the government should initiate measures to protect the State’s interests. The apex court has given six weeks’ time to the Centre to constitute a Board or an authority for implementation of the verdict on allocation of water to the States.

Deve Gowda said Tamil Nadu is already discussing possibility of filing a review petition challenging the SC verdict, but the national parties in Karnataka are busy trading charges over whether it is “10 per cent government or 90 per cent government”. Gowda, however, refused to give any suggestion to the government on the strategy it needs to adopt in the case. “I will reveal it at an appropriate time,” he said.

“Tamil Nadu wants Cauvery Water Management Board. One should realise that the Board is not being constituted as per Inter-State River Water Dispute. It is being set up to monitor water distribution between Andhra Pradesh and Karnataka. This could be detrimental to farmers in Cauvery basin,” Gowda added.

National parties were not interested in increasing the irrigation area in the Cauvery basin. “In 2007, the then Chief Minister H.D. Kumaraswamy challenged the Tribunal’s order in the Supreme Court. However, Congress leaders did not support his move. Now I sought the help of Ananth Kumar to take up a fight in the Assembly. He assured to come back the next day, after consulting party members. The next day did not come. Both national parties are taking the State for a ride in river water dispute issues,” the former PM added.

Cauvery Board not likely soon: Gadkari

Union Minister for Water Resources Nitin Gadkari was non-committal on a possible time-frame for the constitution of the Cauvery Management Board, as mandated by the SC.

Stating that the panel was “in the process now,” the Minister said in Chennai yesterday, “We are very sensitive and very cautious about water problem in Tamil Nadu, Telangana, Andhra Pradesh and even in Karnataka.”