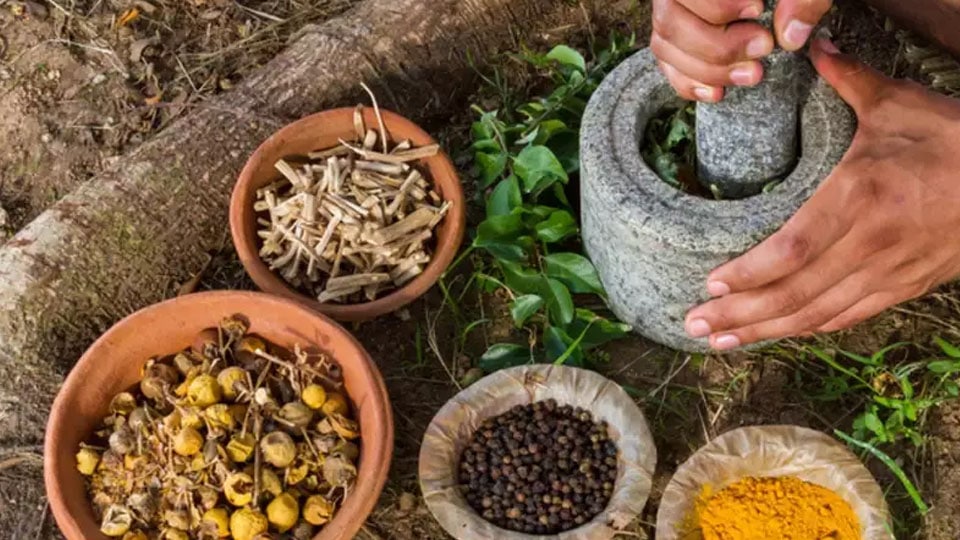 The CCB team led by ACP V. Mariyappa has trapped the gang which had taken a house on rent where they were distributing fake Ayurveda medicine to gullible people by charging them thousands of rupees.

The accused have been identified as 24-year-old Prashanth Arjun Talawar, 25-year-old Chandru Munnavva Eragar and 39-year-old Kumar Gurappa Bagalkote of Gokak town in Belagavi and 32-year-old Harshad Mohan Pawar of Jharera village in South Delhi, New Delhi, who was residing at Paduvarahalli in Mysuru.

Police said the modus operandi of the gang was to identify people walking on roads with illness and promising them to give them good quality Ayurveda medicine. The accused had opened Ayurveda medical shops under the name of Parampara, Siddivinayaka, Sairam and Dhanvantri,  where patients were taken and given fake medicines in the name of reputed brands. By doing this, they had cheated people worth lakhs of rupees. While three accused Prashanth, Chandru and Harshad were arrested by CCB sleuths in Vidyaranyapuram, the prime accused, Kumar Bagalkote was arrested at Mysore Airport in Mandakalli while trying to flee to Belagavi in flight.

The accused, during interrogation, are said to have admitted with the Cops that the prime accused Kumar Bagalkote was using youths from his hometown Gokak to cheat people.

They had opened stores in Mysuru, Bengaluru, Hyderabad, Hubballi and other places and cheated thousands of people. Kumar would monitor the entire operation and lead posh life by traveling in air to various destinations. He had opened a shop ‘ParamparaAyurvedic’ on 1st Floor, House No. 5, 8th Main, Opposite St. Thomas School, Sarvajanika Hostel Road, Vidyaranpuram, where he cheated scores of people.

Cases had been filed against Kumar Bagalkote in Hubballi and Andhra Pradesh on the charges of fake ayurveda medicine. A large quantity of fake medicine had been seized from the accused.

Police said that the accused would take a small house on rent and tie banner of ayurveda centre. The gullible people were brought home and given a variety of powder by charging them thousands of rupees. The business was going on without the knowledge of house owner. The accused would give little money as rent and take one month time to pay remaining amount. Then they would vacate house without the knowledge of house owner.