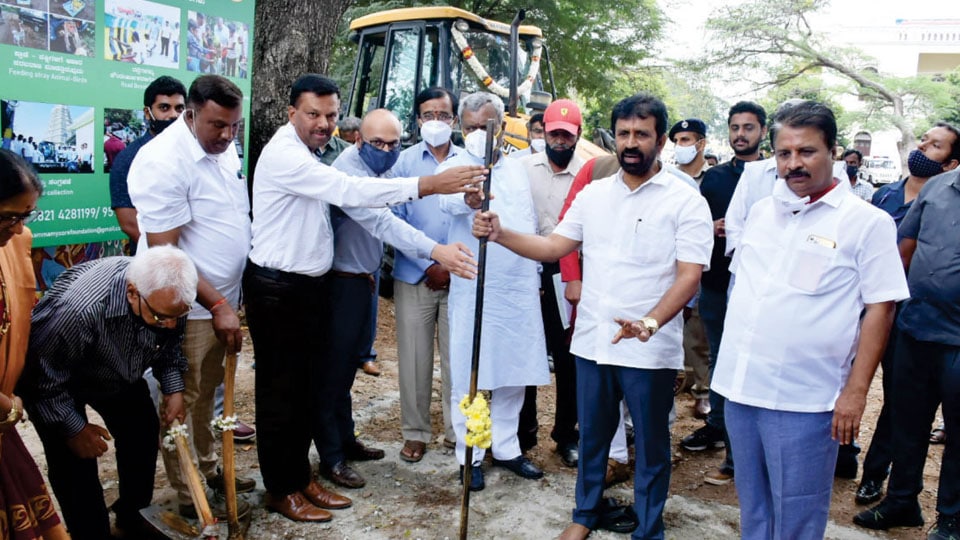 Mysore/Mysuru: Mysuru District Minister S.T. Somashekar, accompanied by elected representatives, party workers and followers along with a battery of officials and media persons took a whirlwind tour of city this morning. A majority of development works were in Chamaraja and  Chamundeshwari Assembly segments.

The Minister’s tour schedule began at around 9 am where he performed Bhoomi Puja for road works at K.G. Koppal. In all, it is a 2.20 km road development works at an estimated cost of Rs. 1 crore. MLA L. Nagendra, MUDA Chairman H.V. Rajeev, Ward 42 CorporatorShivakumar and others were present.

Speaking to reporters, Somashekar said that the State Government was committed to prevent MUDA frauds and a special team headed by a Dy.SP will be exclusively formed. “I have already discussed the issue with Home Minister and Mysuru City Police Commissioner to form a MUDA surveillance and fraud-prevention team soon,” he said.

After this, the Minister’s cavalcade drove to Krishnadhama to meet Pejawar Mutt Seer Sri VishwaprasannaTheerthaSwamiji. He took the Seer’s blessings and discussed fundraising for Sri Ram Temple at Ayodhya.

After this, the Minster proceeded towards Subbarao Park at Niveditanagar to inaugurate a water fountain that functions with recycled waste water.

Later, the Minster and team arrived at Ward 26 KantharajUrs Park near Meena Bazaar to inaugurate a modern toilet built at a cost of Rs. 35 lakh. Mayor Tasneem and other dignitaries were present. Before this, the Minister also visited partyoffice at Sharadadevinagar where he was felicitated.

The next project where the Minister laid the foundation stone was the heritage toilet that is coming up in RangacharluTown Hall. The pay-and-use heritage toilet will be the first-of-its-kind in the country and will be built at the space on the Northern side facing Gandhi Square.

The MCC had signed a MoU with NammaMysuru Foundation (NMF) on March 12, 2020 for the construction and operation of the toilets under BOOT (Build, Own, Operate, and Transfer) arrangement. NMF will build and maintain the toilet for five years and hand over to the MCC.

As per the MoU, NMF will build the toilet at a cost of Rs.1.4 crore. MCC will provide free water while NMF will have to foot the electricity bill.

The toilet will have separate portions for men and women, an exclusive portion for physically challenged attached with ramp facility, a baby-feeding facility for lactating mothers, a full-fledged security room and adequate space for hand wash. There will be 17 toilets and 8 bath spaces, changing room and a utility store. Rainwater harvesting facility will also be implemented in the toilet complex.

The last engagement of the District Minister in the morning was a press conference at PathrakartharaBhavan. The Minister said that a State-level BJP ‘Jana SamparkSamavesha’ (public contact programme) will be held from Jan. 11 to Jan. 13 and the event will be set in motion in Mysuru by CM B.S. Yediyurappa.