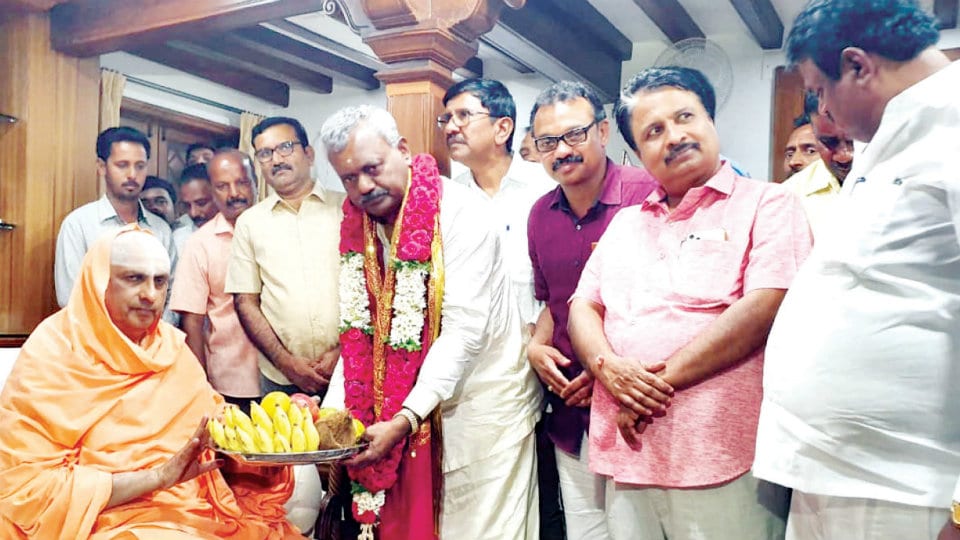 We are no more disqualified, says Minister S.T. Somashekar

Mysore/Mysuru: Hours after he was sworn in as a Minister in the B.S.Yediyurappa Cabinet, newly-elected Yeshwanthpur MLA S.T. Somashekar paid visit to Suttur Mutt here on Thursday evening and sought the blessings of Shivarathri Deshikendra Swamiji.

Later speaking to press-persons, Somashekar, replying to former Chief Minister Siddharamaiah’s observation that they were disqualified legislators for ever, said that although the Supreme Court upheld the then Speaker’s  ruling disqualifying them, the Apex Court gave them permission to contest the polls. Accordingly, the then disqualified legislators contested the by-polls and won and hence their disqualification does not matter now. But Siddharamaiah has failed to realise this and is making unwarranted comments,  Somashekar added.

Maintaining that the BJP High Command will look to any discontent in the party post Cabinet expansion, the new Minister said there was widespread discontent when Siddharamaiah headed the Congress government and when H.D. Kumaraswamy led the coalition Government too. Stating that he was delighted to be a minister, Somashekar said that following an invite, senior leader A.H. Vishwanath, who lost the by-polls, attended the swearing-in ceremony, while another by-poll loser M.T.B. Nagaraj could not be contacted.

Thanking Chief Minister B.S.Yediyurappa for keeping his promise of Cabinet berths to MLAs who were responsible for the formation of BJP Government in the State, he said that the CM has promised Ministerial berths to A.H. Vishwanath and M.T.B. Nagaraj in the coming days.

As far as Mahesh Kumathalli, who failed to make it to the Cabinet, is concerned, the CM will give him a bigger responsibility soon, he pointed out.

Replying to a query on his possible portfolio, Somashekar said that he will seek Bengaluru Development portfolio as he is from Bengaluru. However he would not insist on it, he said and added that he was ready to take up any portfolio that the Chief Minister assigns to him.

Speaking to press persons at H.D. Kote in the district on Thursday, Siddharamaiah said that those who backstabbed the Congress party and joined the ruling party are turncoats. The Supreme Court disqualified them and this tag  cannot be erased even though they won the by-poll contesting on a BJP ticket. Pointing out that party backstabbers in any Government will always be termed as disqualified as per Law, the former CM said that though he was unhappy with disqualified legislators getting Cabinet berths, he would still wish them well.

Lashing out at Chief Minister B.S. Yediyurappa, he claimed that BSY does not have the freedom to expand his Cabinet and everything is controlled by the BJP High Command. He further said that Thursday’s expansion was not complete as there are six berths still left and the disgruntlement in the BJP ranks may explode once the Cabinet is expanded fully.