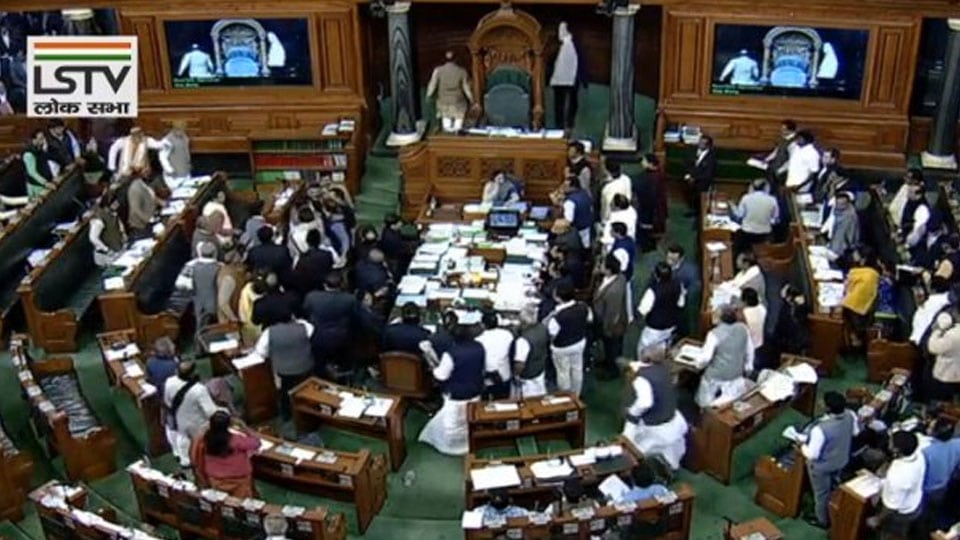 New Delhi: The Lok Sabha was adjourned for more than an hour this morning after it witnessed a ruckus over Union Health Minister Dr. Harsh Vardhan’s statement during the Question Hour condemning some remarks that Congress leader Rahul Gandhi made while addressing an election rally in Delhi.

Dr. Harsh Vardhan interrupted the proceedings of the Question Hour to condemn the remarks by Rahul Gandhi, prompting the Congress MPs to protest. Speaker Om Birla tried to stop the Union Minister. Harsh Vardhan, however, continued with his statement of condemnation. Congress MP Manickam Tagore was seen moving towards the front row of the Treasury Bench where the Union Minister was speaking from. Speaker then adjourned the House till 1 pm.

Addressing an election rally on Wednesday, Rahul Gandhi said that Modi would not be able to come out of his home after six months as the youths would beat him up with sticks and make him understand that the country could not progress unless he provides employment to them.

Though Speaker was conducting the proceeding of the Question Hour, Harsh Vardhan rose abruptly and started reading out a statement from a piece of paper. He said he would like to first “unequivocally condemn the outlandish remarks” of the Congress leader against Prime Minister.

Parliamentary Affairs Minister Prahlad Joshi said, “After Rahul Gandhi’s instigation, they thought                  of showing the ‘danda’ way. There was an attempt to manhandle Dr. Harsh Vardhan. This shows the frustration level of Congress and  height of goondaism.”