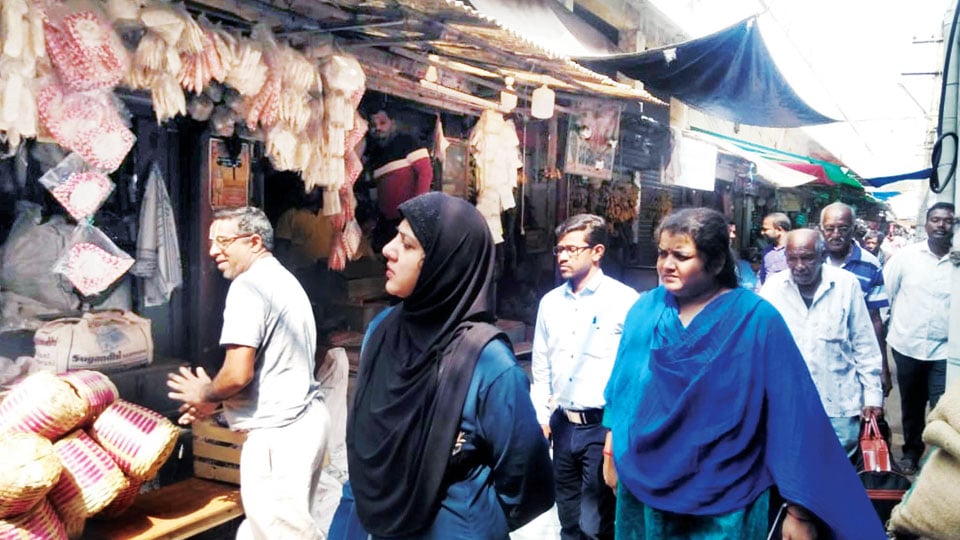 Says demolition best choice: Proposal will be sent to Government on Monday

Mysore/Mysuru: The  Mysuru City Corporation (MCC), which is hell-bent on demolishing the century-old Devaraja Market and the tenants, who are paying rent to the MCC for shops and slots in the Market are set for another showdown over the issue of demolition.

The final proposal to demolish the Market will be sent to the State Government for approval on Monday, said Mayor Tasneem Bano, who visited the Market this morning. It was her maiden visit after she was elected as the Mayor recently. She was accompanied by Deputy Mayor C. Sridhar and other officials.

Even as the tenants were insisting that the Market can be repaired and restored, the Mayor told them that demolition was the best alternative than repairing and restoring the structure.

The Council has decided to demolish the structure and reconstruct the building keeping its heritage value in mind. Even the Court of Law has asked the MCC to demolish and rebuild the heritage structure.

Even the Expert Committee from Chennai and Karnataka State Technical Task Force had inspected the Market and confirming its dilapidated state, had also suggested demolition. Following this, the Council has passed a resolution declaring that the structure will be razed and a new heritage-like building will be constructed, the Mayor informed the traders.

For the MCC to send a proposal to the Government, it has to video-record the Market in its present state and send a proposal to the Government for approval. The Mayor directed the officials to send the proposal on Monday so that the dilapidated Market can be reconstructed. She reasoned that more than structures, human lives are important and if anything goes wrong, the MCC must shoulder the blame.

The Mayor’s move met with stiff resistance from the traders and tenants who insisted that the Market can be repaired and restored. Calling the move illogical, the tenants said that there are more than 100 heritage buildings in Mysuru and the MCC logic should apply to all of them. They called for the acceptance of the recommendations of Heritage Committee that has asked the MCC to renovate and restore the building.

Tenants said that the MCC was not looking at the heritage value but was focussing only on commercial aspects and generating revenue most of the Devaraja Market complex was in a fairly good state. Only a few places on the terrace, roof slab need to be restored and this damage has been caused due to poor maintenance, they justified.

Inside sources, however, said that the tenants are opposed to the demolition as it will take at least two to three years for the MCC to demolish and reconstruct the building and tenants will be out of job till the works are complete. Tenants fear that the MCC will not make any alternative arrangements to them and they will be left in the lurch.

Another reason is that only 30 percent of genuine tenants have occupied the Market and the rest of the 70 percent have given them on rent, leased and even sub-leased the shops. Also, once the new Market is constructed, the tenants have to shell out more as rent and will not be cheap as it is at present, said sources adding that the tenants will oppose demolition tooth and nail setting stage for a confrontation with the MCC.

3 COMMENTS ON THIS POST To “Mayor visits Devaraja Market”