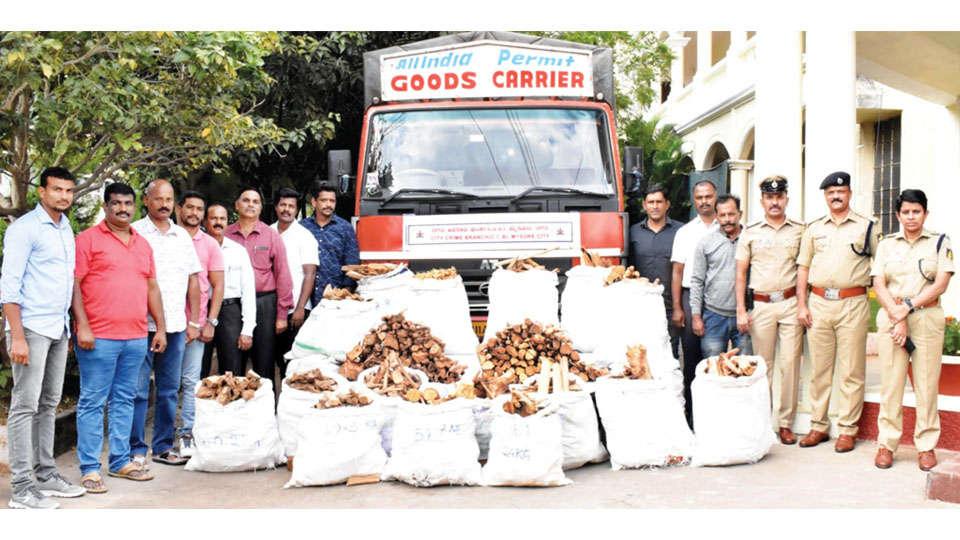 Mysore/Mysuru: City Crime Branch (CCB) Police have busted a huge sandalwood smuggling racket in city by arresting two smugglers and have recovered 700 kg sandalwood worth Rs. 1 crore besides seizing Rs. 15,000 cash, one goods vehicle and two mobile phones from them.

The CCB Police, who had collected information that sandalwood had been purchased from a smuggler and was getting readied to be smuggled to Bengaluru in a goods vehicle MH-11-AL-3850 from Pulikeshi Road-MKDK Road junction in Mandi Mohalla, raided the spot at about 11 pm on Dec. 13 and arrested two persons involved in smuggling.

On inspecting the goods vehicle, the CCB Police found sandalwood billets weighing 700-kg hidden in a secret cabin behind the driver’s seat and recovered it besides seizing the vehicle, cash and mobile phones from them.

A case has been registered at Mandi Police Station and the CCB Police, who are continuing with the investigation, are on a lookout for others who had stored such a large quantity of sandalwood and also for purchasers.