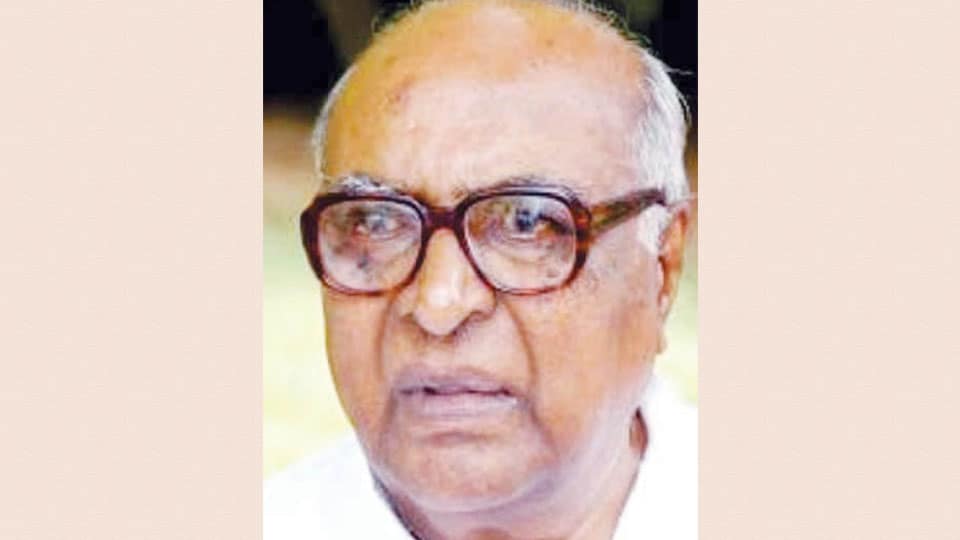 Last evening, I spent an hour and a half at the Dhvanyaloka auditorium listening to Prof. K.C. Belliappa of Manasagangothri English Department speak about his Guru and mentor Prof. C.D. Narasimhaiah (CDN), who is anointed with Padma Bushan and an Honorary Doctorate from the Mysore University for his life-time achievement in the cause of English language and his pioneering role in English Studies in India.

The occasion was specially created to felicitate CDN on his 80th birthday rather in advance by Kumari L.A. Meera Memorial Trust to coincide with its week-long programme of, surprisingly, what is termed as “The discussion meeting on physics of biological systems” which would conclude today. This function was, perhaps, intended to say thanks to the Drona of Dhvanyaloka, CDN, for sparing his premises for a week to conduct the programme of the Trust.

Listening to Prof. Belliappa for exactly one hour and ten minutes, I thought the organisers could not have chosen a better person than him for this most satisfying job for any student. Certainly, it was not a long, rambling, meandering, winding and boring panegyric of a distinguished person bordering on flattery. While CDN for his stature is beyond flattery, his protege has no need to flatter his mentor either. Prof. Belliappa’s felicitation speech, at least for those who have known CDN for many years, was like a raconteur and reminder of the life, times and achievements of CDN down the years. Which was why, a lengthy encomium was listened to in rapt attention by a small select audience.

No wonder, CDN is very fond of Prof. Belliappa, his student, whom he taught in the Post-Graduate classes and also for whom he was the guide for his Doctoral thesis.

I was pleasantly surprised when after the function CDN in his typically genial manner came up to me and said that Prof. Belliappa was his “fulfilment” as a teacher. A rare compliment for any student coming from a most distinguished teacher of English language of our times respected both in India and all over the English-speaking world. More so because CDN is known to be a conservative in matters such as complimenting others spontaneously or for sentimental reasons. Well, after all, is he also not known as a critic? Literary critic?

CDN’s credentials reminded me of Abraham Lincoln. If Lincoln’s march of life was from the legendary log cabin to the White House, our CDN’s is from a run-down township called Closepet to Cambridge.

Born in 1921 (forget about his date of birth) to humble parents, who were low on social status but high on domestic discipline and religious learning and practice, CDN went to Cambridge purely on merit and then to Princeton in USA with a Rockefeller scholarship. It is but natural, therefore, name and fame followed him in his chosen field of study. It must have indeed given him lot of inner satisfaction and material comfort.

However, my perception is that CDN must be nursing a regret that he could not become the Vice-Chancellor of Mysore University because of politics, specially during the period of late Chief Minister D. Devaraj Urs. Let it be. Who knows, had he become the Vice-Chancellor, our city would have been poorer without an abode of Saraswathi, an Arcadia of the kind that existed in ancient Greece, that CDN established — Dhvanyaloka. I may say that out of CDN’s dukha was born Dhvanyaloka !

Prof. Belliappa revealed a number of hitherto unknown facets of CDN. He was the youngest Principal of Maharaja’s College at its heyday and he had come up with new ideas for the benefit of students like setting up of a Health Kitchen to provide healthy and economically priced meals for students and starting of a Freeship Scheme to help poor bright students.

It seems, Dr. U.R. Ananthamurthy was one among those who applied for freeship under CDN’s scheme but failed to get it.

Another brainchild of CDN was setting up of a Cultural Forum called Mithra Mela which threw-up theatre talents like   Dr. Sindhuvalli Ananthamurthy, Dr. N. Ratna and others.

CDN, who is known for his sophistication in sartorial tastes, being immaculately dressed  just as his impeccable speech and writing, social etiquette and manners, couldn’t suffer an arid ungainly sight of the huge land area of his college domain. So he sought the help of one NCC Officer and got a beautiful landscape done with the voluntary service of the students.

A true teacher must indeed first teach. Only thereafter he may indulge in other related activities. CDN strongly believed in this principle. Which was why, even though, in those good-old-days it was not necessary for the Principals to take classes, CDN would take regular classes reaffirming his devotion to the teaching profession.

Here I am reminded of what Prof. Belliappa said later in his talk about some of the teachers. He said, there were instances where teachers had taken just one or two classes in a semester. Usually, we have heard of students bunking classes but here we have instances of teachers bunking classes. For them, taking classes is a luxury. And then, the punch line: If at all there is an unaccountable profession in the world, it is teaching !

In a talk such as this one, it is inevitable for the speaker to bring in his personal experience with the subject or in relation to the subject of his talk. Prof. Belliappa alluding to such an experience recalled that soon after he got admission to English MA in Manasagangothri, he bemoaned with a friend that being a Science graduate he was to do his Post-Graduation in Chemistry but his fascination for English language made him go for MA English and wondered if he could fare well at all. His friend’s forthright and honest advice was: That is no problem. First read the Bible.

Very true, very true. When I first joined a diploma course in Journalism at the Bhavan’s College of Journalism, Bombay, on the very first day our English teacher, one Mr. Nedunchezhian, gave us the same advice. It was then that I bought my first Bible and I am better off today with English language than what I would have been otherwise. The spiritual benefit I derived from reading the Sermons of  Jesus was, of course, a bonus!

NOTE: The Year 2021 is the Birth Centenary Year of CDN and Dhvanyaloka, The Literary Criterion Centre for English Studies and Indigenous Arts on Bogadi Road in Mysuru, was founded by CDN in 1979.—Ed