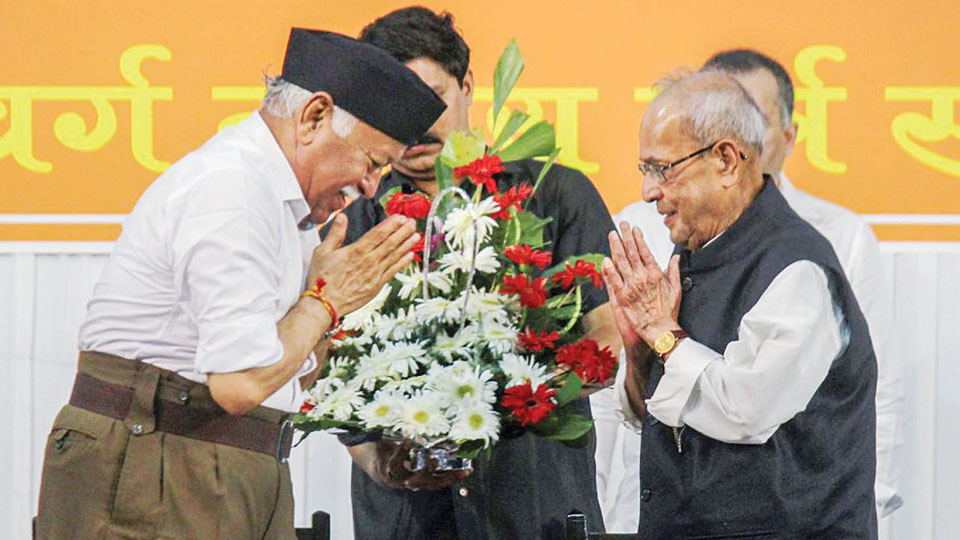 Much is made about former Congress Union Minister and the former President of India Pranab Mukherjee’s visit to RSS Head Quarters (HQ) in Nagpur to address a function yesterday. Even as the news of the visit was announced, the Congress began to question the visit as ill-advised and absolutely wrong. How can a Secular leader and  now a common citizen compromise the ‘sacred’ principles of Secularism and thus indulge in camaraderie with a Communal Hindu organisation like Rashtriya Swayamsevak Sangh (RSS)?

The Communists too were not far behind in criticising Pranab Mukherjee for his decision. The opinion of these parties and the Leftist thinkers is that ‘if you are not with us, you are against us.’ Was Pranab Mukherjee against the principles of the Congress on the question of Secularism? Was the RSS Communal, a word used as an antinomy to Secularism? These two politically charged words — Secular and Communal — are the creation of the Indian Leftists [on the verge of exiting from the Indian Democratic electoral polity] and the Congress, which too is under the threat of giving-in to the BJP, an offshoot of RSS. In other words, what Nehru-Gandhi dynasty is to Congress, RSS is to BJP.

I have been wondering at the steady decline and fall of Congress Party in today’s electoral  politics because this was the party that ruled India for decades after Independence in 1947 mesmerising the educated and uneducated voters with the sentiments of ‘Unity in Diversity’ at home and ‘non-alignment’ in foreign policy.

Sadly, it was the Congress Party that exploited the diversity in religion, caste, language, economic status, even culture and history of regions to win elections. Its appeasement policy of Muslim and Christian minority religions became famous as “Congress Vote Bank” till it was breached by Mulayam Singh Yadav’s Samajwadi Party (SP) in Uttar Pradesh. Muslims too realised the Congress was ‘playing politics’ with Muslim rights under the Constitution. And smart-fanatical Muslim bodies too began asking, “Sir some more please” from a Congress too willing to oblige. So you have a Shah Bano  case, for example.

In Mumbai, it was Shiv Sena under Bal Thackeray that exposed Congress and its secrets of winning elections by dividing Hindus on caste-lines and by building minority vote banks. One example is how Shiv Sena exposed Congress’ political hypocrisy. The Muslims in South Bombay, on a particular busy road were allowed to offer Friday prayers on the road as the local Mosque was not able to accommodate all the faithfuls. During this prayer time at noon, the road used to be closed to facilitate Muslim brethren. Shiv Sena objected but the Congress government said no.

Before Congress Government would know what would Shiv Sena do, the busy Prabhadevi road where the rich and famous lived and where the famous Siddivinayaka Temple is located, was flooded with thousands of women and men holding Mahaarati trays in hand offering puja on a Saturday and every Saturday. The road was blocked for hours. It was Shiv Sena’s answer to Congress government’s ‘no’ to its objection.

It was only then the Muslim organisations came up with the statement that it had sought permission to construct multi-storey buildings on the existing Mosque but the Congress government refused. However, after the arati protest, permission was granted. Well, this could have been done when the request was made. But, no. Congress, probably, wanted the Muslims to know how helpful Congress was — going to the extent of closing the public road to help the Muslims to pray! So much for working towards ‘Unity in Diversity.’

“The Mahaarti started as a spontaneous and natural reaction of the Hindus who were inconvenienced and irritated because of the action of Muslims to read Namaz on streets.”

As for Secularism, it is simply the principle of treating all religions, and India has many, equally as per the law of the land. Any discrimination between the majority and minority is not being Secular. When the State (government) functions only as a temporal authority, to the exclusion of ecclesiastical, religious, matters, it is Secular. But in India the governments always had a hand in religious matters doling out favours and benefits to suit the electoral politics.

So much for Secularism in India. However, Communalism is endemic in our country. Congress may see Communalism only in BJP and RSS. Well, “Why do you look at the speck in your brother’s eye, but fail to notice the beam in your own eye?” said Jesus. Congress is equally communal. It gives tickets to contest election on the basis of religion and caste. It also allots portfolios to the Ministers on the basis of caste and religion — Brahmin, Vokkaliga, Kuruba, Lingayat, Christian, Muslim, SC and ST — as is now seen in Karnataka and NOT on the Minister’s merit. Hence, is not Congress too communal? This is the question we must ask the Congress which is crying foul about Pranab Mukherjee’s visit to the RSS HQ yesterday.

Indira Gandhi and the Congress created a spectre (BJP) that fed and reared itself in the political spaces and communal suspicion that the Congress nourished and cultivated… BJP is prepared to do by day what the Congress would do only by night.

– Arundhati Roy in “The Algebra of Infinite Justice”.

Pranab Mukherjee in his speech had emphasised on the need to practice tolerance by all irrespective of differences in  religion, political party, economic situation, caste, creed and language. He said, “Indian Nationalism” is based on “Constitutional Patriotism.” What he means, I guess, is that patriotism in India is not the monopoly of any religion, read Hindu, but is derived from our Constitution. If this is the thinking of Pranab Mukherjee, what is objectionable in it? Congress and Leftists seem to be creating a phantom of Communalism to pursue their political agenda.

Can anyone undo what Pranab Mukherjee calls “Our inherited and shared  diversity.” I think not. Not even RSS can.

And for sure, it has no such intentions either, from what I heard from RSS Chief Mohan Bhagwat’s speech yesterday. So Congress may stop crying wolf about Pranab Mukherjee’s visit to RSS HQ.

And Congress may well remember, that this organisation is Rashtriya Swayamsevak Sangh (RSS) which means National Volunteers Service Association and not Hindu Swayam Sevak Sangh to be even considered communal by its nomenclature unlike the Muslim league.