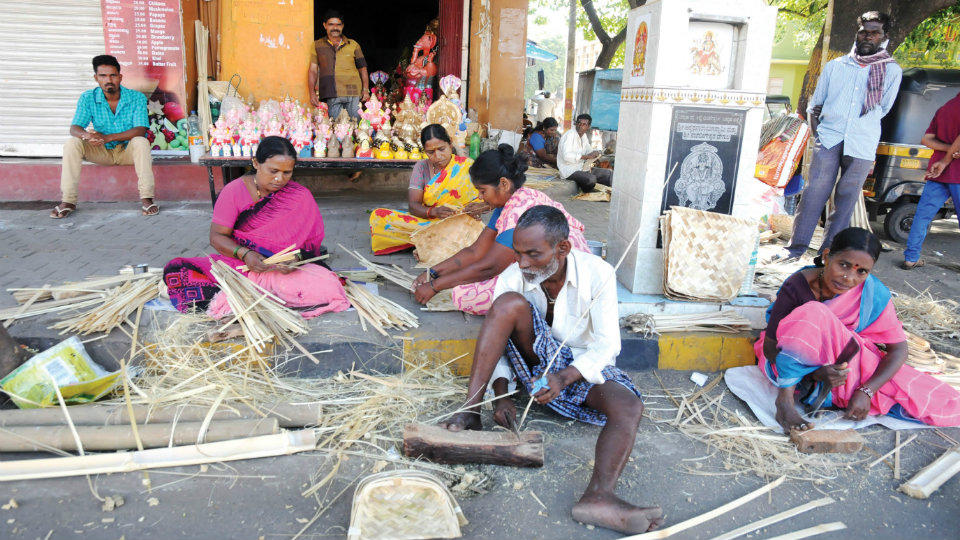 ‘Mora,’ the humble kitchen utensil woven from bamboo strips, gains immense significance during the month of Shravana in Karnataka.

This simple bamboo tray, which is otherwise mainly used to separate the grain from the chaff, clean grains and pulses, becomes a very auspicious part of the Gowri festival which will be celebrated by womenfolk at almost all Hindu households tomorrow.

A pair of moras, filled with pulses and rice, along with other puja articles, is given as an offering and is called ‘baagina.’ Baagina is traditionally an offering and when it is offered in a mora, it is called morada baagina.

Baagina is exchanged between women, given to daughters by mothers and by the daughters to the mothers. According to Kusuma Rao, a resident of Jayanagar, offering and accepting baagina is a symbol of prosperity, wishing that all things offered in it will continue to increase and remain inexhaustible, as also a prayer and blessing to remain a suhaagan throughout one’s life.

“The practice of giving it in two moras (one covering the other) probably started, as in earlier days bamboo was widely used and also it would serve to clean the pulses and grains. The mora is used to separate the grain from the chaff and this also probably signifies that we need to use our discretion and give and accept only the good things in life,” she adds. Another objective is that the receiver has enough pulses and rice to cook a meal for herself.

One more interesting feature, Kusuma says, is the way in which baagina is offered. The giver and the receiver hide the moras with their pallus and exchange them. It is because of the belief that any offering should be devoid of any kind of pomp and show and be as discreet as possible.

The baagina basically contains five of all the items placed, symbolising the five elements. While it has rice and four types of pulses, five puja articles and five cosmetic items, jaggery is also included. It is said the 16 items kept in the baagina signify the presence of Goddess Gowri in 16 different forms of Lakshmis or Shodasha Lakshmis. There are slight variations between different regions in Karnataka and even different households, regarding what the baagina includes. However, of late even this is modernised with a lot of other parphernalia being included. Traditionally the moras are cleaned and smeared with turmeric and kumkum dots. But even that has become more artistic now !

There is a ritualistic background too. During Nagapanchami, sisters invite their brothers home and make them break a ‘bhandara’ (a coin is placed in a kadabu, kept on the threshold and the brother breaks it with his elbow) and offer him the coin along with a gift. The brothers in turn want to give a gift to their sisters to strengthen the bond between them, and the Gowri festival which follows suit is the best time to return favours! So the married daughters are invited to their parents’ house and offered baaginas, and they carry back not just the gifts but a load of wishes and fond memories till they come back the next year.

On the festival day, after puja, baagina is first offered to Goddess Gowri. Baagina is also offered by the bride during Gowri puja on the day of marriage and is considered very auspicious.

As mentioned earlier, the baagina is a symbol of prosperity and when the rains are good and the rivers are full, there is a practice of offering baagina to the rivers too. It may be recalled, Chief Minister H.D. Kumaraswamy had offered baagina at Harangi, Kabini and KRS in July 2018.

While everyone is busy buying moras on the eve of Gowri festival (Sept.12) and excited to decorate them and offer baaginas, for the bamboo weavers it is just another day of struggle and hard work !

Somanna, a weaver who sells his ware near Apollo Hospital in Kuvempunagar, says though the demand for moras increase during the festival, their profit margin is very less as the raw material costs have sky-rocketed. “Earlier during the festival, the government supplied bamboo to us from the forests near MM Hills and it was very affordable. But now it is illegal to procure bamboo from the forests so we have to depend on private suppliers who charge us heavily. The government says that they will procure it for us if we identify private lands which grow bamboo. But where do we have the time for that. Bamboo is an integral part of our households and we need some kind of support in procuring the raw materials at a reasonable cost,” he says. “We have seen bamboo dry up and go waste in the forests but the government refuses to give it to us. Doesn’t the bamboo shoot grow well only when its cut?” questions Raji, Somanna’s wife, who rues that the use of the moras also has significantly reduced even in the rural areas! It was used a lot to clean ragi but now the flour mills have machines to clean ragi before making flour. That’s the reason we have diverted to make other items like ladders, flower baskets, strainers, lids for vessels etc.”

Gowramma, who has been selling bamboo items in the same place since the last 20 years, says the moras are in demand mostly during the festival. “We sell around 10 pairs a day during the season. It takes 2 hours to make one mora, so we can make only 5-6 pairs a day. Sometimes we buy from other weavers and sell it here. But as the sale of the moras are seasonal, I mainly make and sell sun shades and ladders. It’s a struggle all the way,” she bemoans, but has a broad grin when she looks at how neatly she has woven the smaller moras, which little girls buy and offer baagina in. 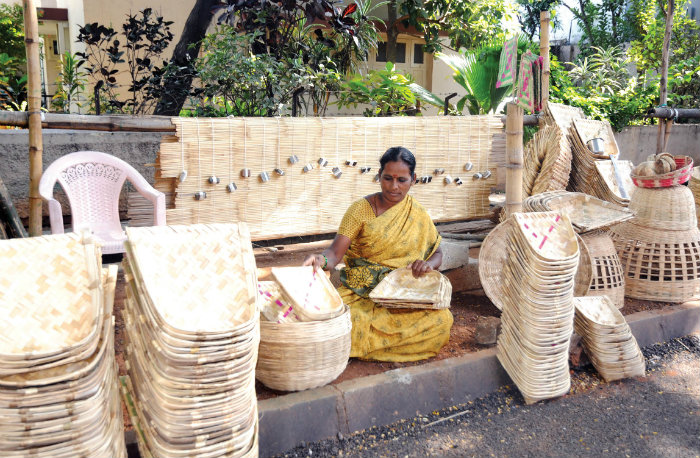 Bamboo weaver Gowramma who sell her wares near Apollo Hospital in Kuvempunagar.

More than 100 families are working continuously and selling their wares in various parts of the city, mainly Agrahara, Nanjumalige, Bamboo Bazaar and New Kantharaj Urs Road.