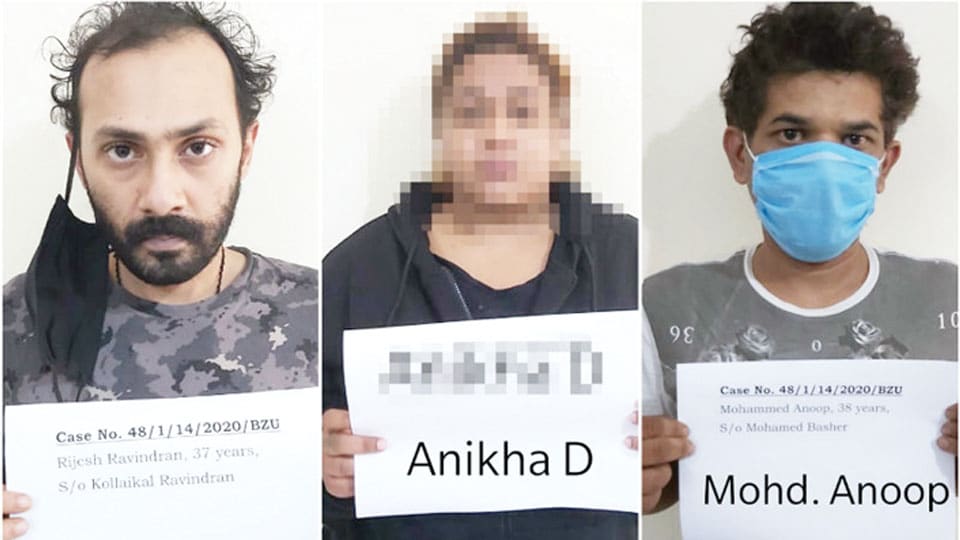 Bengaluru/Mysuru: Close on the heels of celebrity drug supply racket issue rocking Bollywood following the suicide of actor Sushant Singh Rajput, the Narcotics Control Bureau (NCB), has busted a racket in Bengaluru, that supplied drugs to VIPs as well as Sandalwood celebrities.

The NCB has arrested the racket kingpin and former television actress D. Anikha and two of her associates M. Anoop and R. Ravindran while confiscating large haul of drugs.

NCB Deputy Director K.P.S. Malhotra said that the gang distributed drugs to prominent musicians and top actors in Karnataka and the receivers, including children of VIPs in the State are under scanner of NCB.

The agency has seized 145 ecstasy or MDMA pills and over Rs. 2.2 lakh cash from Royal Suits Hotel Apartment, Kalyan Nagar on Aug. 21. In the follow up action, the team confiscated 96 pills of MDMA and 180 LSD blots at Nikoo Homes in Bengaluru.  Later, 270 pills of MDMA were recovered from the house of Anikha, located at Doddagubbi.

MDMA (methylenedioxy-methamphetamine), commonly known as ecstasy, is a party drug that alters mood and its perception is chemically similar to stimulants and hallucinogens. It produces a feeling of increased energy and pleasure. As per officials, each ecstasy pill costs between Rs. 1,500 and Rs. 2,500 in the domestic market. The cost of the drug went up as the party progressed.

Ravindran was the main distributor, after the receivers booked their drugs online. NCB officials found over 2,000 numbers saved in his mobiles, which included at least 10 top Kannada cinema actors, prominent musicians and children of VIPs. Besides, he also used to supply drugs to college students.

Anikha was a small time television serial actress in Bengaluru. She stopped acting and took to narcotic supply. With her glamour industry background, she established contacts with celebrities and started supplying drugs to them.

Sources said they had been running the racket for many years. “Anikha sourced the drugs from abroad via an international courier service,” said a Police official, adding that payments were made in bitcoins.

“The lady drug supplier, who had been the main kingpin of the case, was intercepted and 270 pills of MDMA were recovered from her house. “Preliminary investigation has revealed that the accused used to supply drugs to affluent sections of society, including prominent musicians and actors as well as to college students and youngsters,” Malhotra said, adding that more persons are likely to be apprehended.