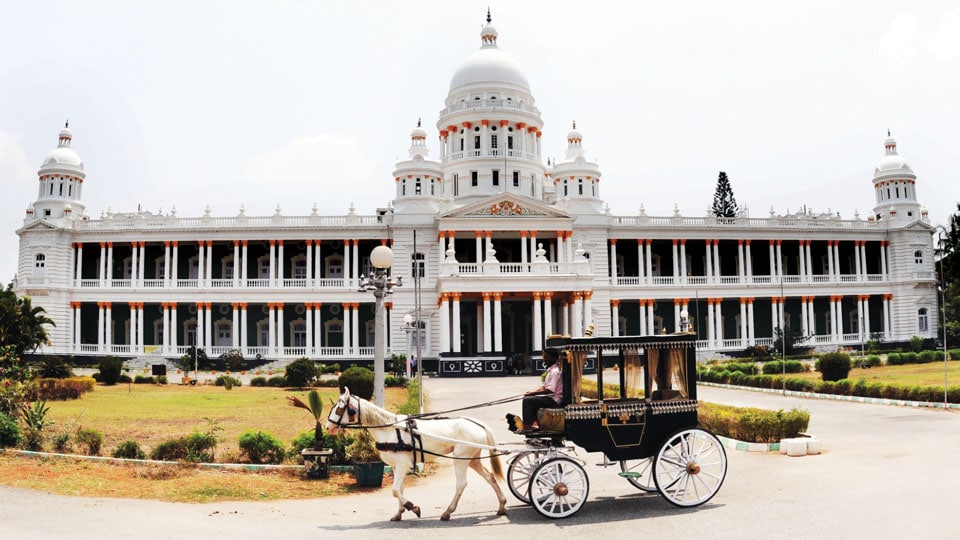 Mysore/Mysuru: With the city’s iconic Lalitha Mahal Palace completing 100 years this year, the centenary celebrations of the Palace, which was converted into a heritage Hotel in the 1970s, will be celebrated in November 2021.

Announcing this at a press meet at Lalitha Mahal Palace Hotel this morning, M. Appanna, Chairman of State-owned Jungle Lodges and Resorts (JLR), which is managing the Hotel after it was transferred to Government of Karnataka in 2018, said that it has been decided to organise the centenary celebrations in a befitting manner.

Tracing its history, Appanna said the Palace was built in 1921 (foundation laid on Nov.18, 1921) by the then Mysore Maharaja Krishnaraja Wadiyar IV for the exclusive stay of the then British Viceroy of India and subsequently as a Guest House for European Guests of Maharajas.

Pointing out that the elegant Palace painted in pure white, has a total area of 81 acres, including 51 acres and 15 guntas donated by the Maharajas, he said that the Palace was built by Krishnaraja Wadiyar in 1921, when it then cost Rs.13 lakh.

Noting that Lalitha Mahal Palace, which is fashioned on  the lines of St. Paul’s Cathedral in London, was converted into  a heritage Hotel in 1974 when D. Devaraj Urs was the Chief Minister, he said it was run as a part of Ashok Group of India Tourism Development Corporation (ITDC) under the Government of India until 2018 when it was transferred to Government of Karnataka.

Returning to centenary celebrations, Appanna said that the JLR Board will be meeting at the Palace Hotel on Jan.6 when the details regarding the dates and schedule of programmes will be discussed and finalised.

He further said that members of the erstwhile Mysore Royal family Pramoda Devi Wadiyar and Yaduveer Krishnadatta Chamaraja Wadiyar will be feted by the Chief Minister during the centenary celebrations.

Highlighting the facilities and services at the Hotel under JLR, Appanna said that a spa, restaurant, buggy ride (chariot) and  earth shop (souvenir shop) have been started recently.

Pointing out that the Hotel has 54 rooms, with a swimming pool and a Banquet Hall, he said that the Hotel will be let on rent for film shoots, photo shoots  and weddings.

“The JLR has evolved plans for making the Hotel affordable even to common man. As per the plan, the buffet price has been fixed at Rs.750, which is far lesser when compared to other Hotels of this standard. At the same times, measures have been taken to ensure quality and quantity and there will be no compromise on this. The Hotel is considering to provide naatikoli (chicken) dish with ragi balls in the coming days,” he said.