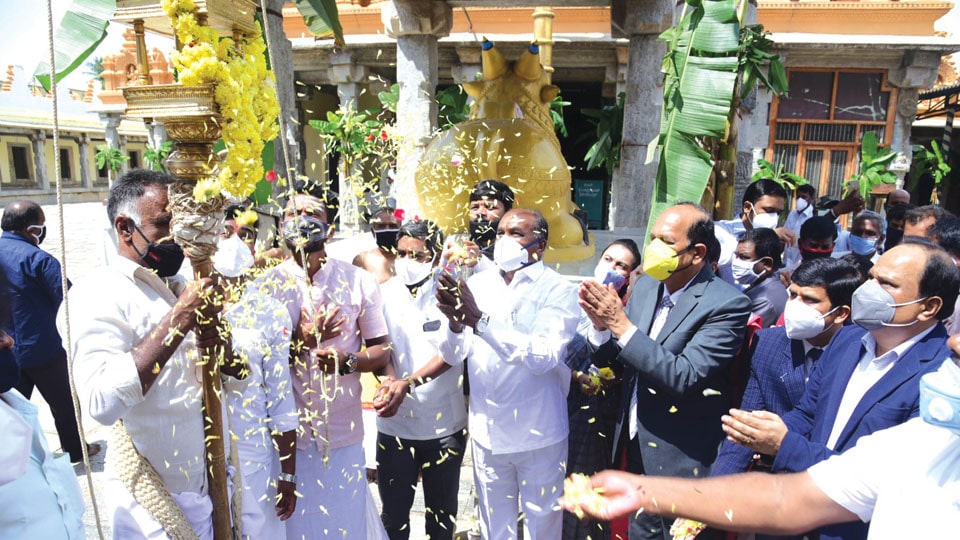 Chamarajanagar: The four-day traditional and simple Chamarajanagar Dasara began here yesterday. The simple Dasara got underway with MLAs and other people representatives of the district performing puja at Sri Chamarajeshwara Temple at 10.30 am on Saturday.

Later, flower petals were showered on Nandi Dhwaja near the Temple, following which Chamarajanagar MLA C. Puttarangashetty lighted the lamp in the Temple premises to formally launch Dasara festival.

As part of the celebration, cultural programmes will take place  from 7 pm to 8 pm at the Temple premises on all days till Oct. 20. The cultural programmes will be telecast live in local cable channels and social networks, according to Deputy Commissioner Dr. M.R. Ravi, who has appealed the people to celebrate Dasara in their homes in the wake of COVID-19 crisis.

Suresh Kumar said that the CM Yediyurappa has directed Mysuru DC, who is also the Dasara Special Officer, to release Rs.36 lakh for Chamarajanagar Dasara. The Minister also extended greetings to the people of the district for Dasara.