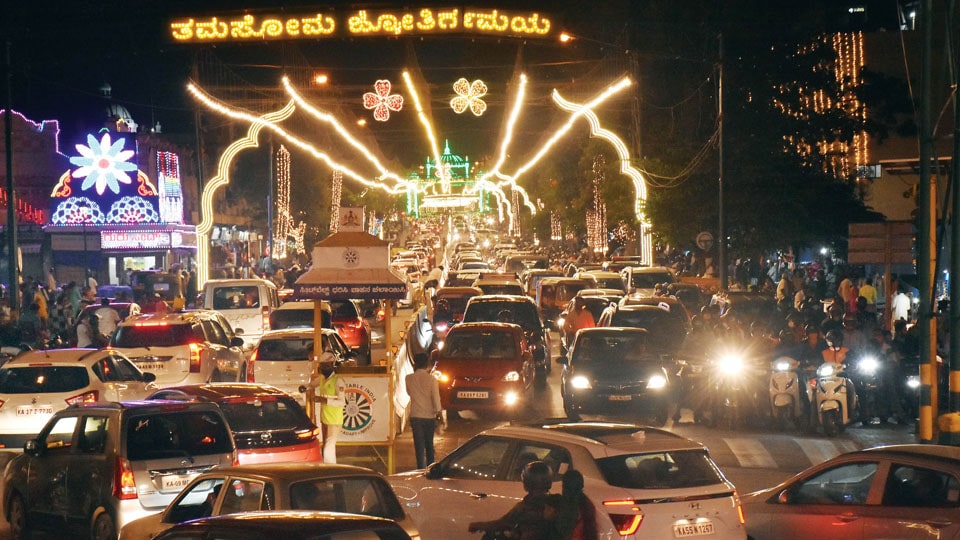 Mysore/Mysuru: The mandatory COVID-19 protocol went missing on the first day of Dasara Festival with thousands of people descending on the illuminated city roads last evening.

Traffic was held up in Central Business District (CBD) as hundreds of vehicles were lined up on both sides of the road from K.R. Circle up to Jayachamaraja Wadiyar Circle (Hardinge Circle). As all important Circles, traffic junctions and main roads were illuminated, thousands of people came out of their homes to see and enjoy it besides capturing the moment with their friends and families in mobile phones.

Large crowd was seen in front of Varaha Gate of the Mysore Palace to click their pictures in the background of illuminated Palace. The Traffic Cops switched off the automatic signal lights and resorted to manual control to streamline the traffic.

The State Government has decided to celebrate this year’s Dasara in a simple manner in the wake of COVID-19 pandemic. Even the Technical Committee had recommended to the Government to restrict the crowd to only 50 for the Palace cultural programmes and 300 for Jumboo Savari procession on Oct. 26. In tune with the guidelines issued by the Union Health Ministry, the State Government had cancelled the cultural events at multiple venues and decided to hold only in Palace premises that too for only two hours for nine days.

With regard to illumination, the CM had given permission to illuminate only 50 kms in the city as against the usual 100 kms.

Following warning from experts about the possible outbreak of Corona if people were allowed to gather near the illuminated spots to take selfies, the Minister had directed the Cops to ban parking of vehicles on main roads within the city and also to deploy Police to prevent people from gathering in front of the illuminated spots. He also wanted the Police to make people to follow health guidelines like face mask, hand hygiene and social distance. But, none of these things were followed by the citizens last evening around the illuminated Palace. This has posed a big threat to the city, especially in the wake of spike in Corona positive cases and casualties.

It may be recalled that the CM had revoked the orders of the District Administration on the closure of all important tourist spots in and around the city till Nov. 1 to prevent spreading of pandemic, following a request from the tourism and hospitality industry delegation.

Since March, the citizens were denied of any entertainment due to pandemic. However, Dasara festival came as a big relief for them to go around the city to see illumination forgetting the danger involved in it.

Dr. C.N. Manjunath, Director of Sri Jayadeva Institute of Cardiovascular Sciences and Research, Bengaluru, who inaugurated this year’s Dasara festivities atop the Chamundi Hill on Saturday, had said people need to be very careful as ‘Crowd and COVID go together.’ But the attitude of general public had given a feeling that they were more bothered about entertainment than personal safety.

READ ALSO  Kodagu-based man, who returned from Dubai being treated for suspected Coronavirus

Meanwhile, not much of tourists were seen in the city on the second day of Dasara today due to pandemic. Hardly 514 domestic and nine foreign tourists had visited the Palace from 10 am to 12 noon. However, the response was still low to Mysuru Zoo with hardly 330 people visiting till 12 noon.