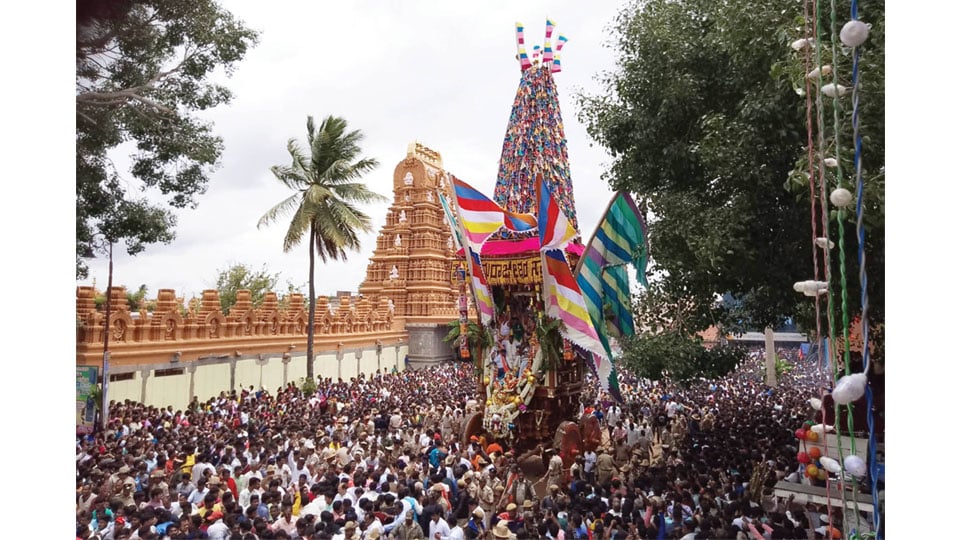 Chamarajanagar: After a gap of five years, the famed Chamarajeshwaraswamy Rathotsava was held in a grand manner here today with lakhs of devotees offering their obeisance.

The Rathotsava, which attracts a sea of devotees from various districts across the State, was discontinued since 2017 after a portion of the ‘Dodda Ratha,’ stationed in front of the famous Chamarajeshwara Temple here, was burnt by a miscreant.

The event was halted as it was generally believed that the usage of the burnt chariot was inauspicious.

Now the important car festival was held in the new chariot for the first time. Utsava Murthy was brought from the Chamarajeshwara Temple to be placed in the Ratha at 11.30 am and the Rathotsava began in the presence of titular head of Mysore Royal Family Yaduveer Krishnadatta Chamaraja Wadiyar, MLA Puttarangashetty, Chamarajanagar Deputy Commissioner (DC) Charulatha Somal, SP Shivakumar and others.