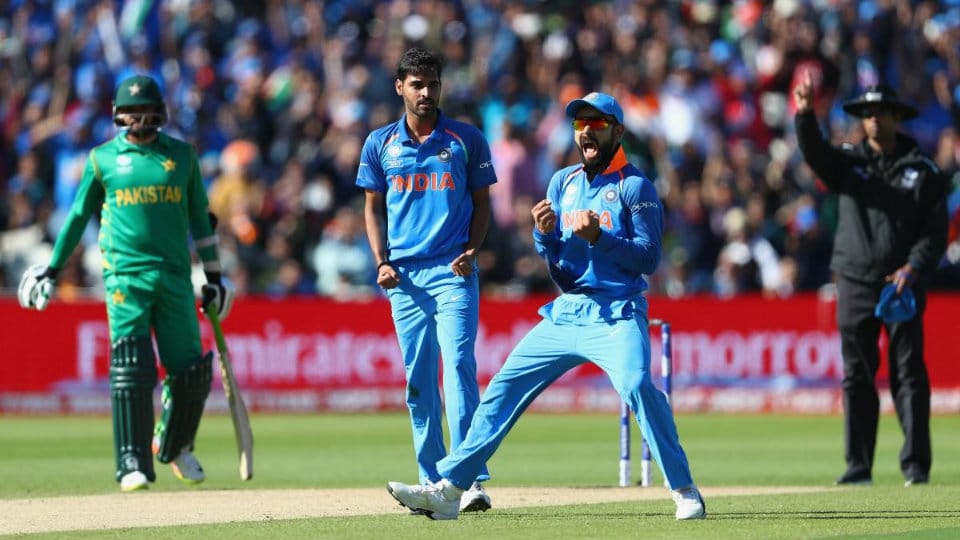 An all-round performance by the Men in Blue ensured that they continued their good record against Pakistan in ICC tournaments as they defeated their arch rivals Pakistan by a margin of 124 run in a rain-curtailed match at Edgbaston yesterday.

The fortunes changed in the match just like the weather at Birmingham and it was Virat Kohli and his boys who came out shining just like the sun over the Edgbaston at the end of what can be termed as a one-sided contest.

Sarfraz Ahmed’s calculated decision to bowl first, keeping the chances of rain in mind, backfired as India posted a total in excess of 300 as all four of their top order batsmen scored half-centuries.

The already stiff target became even tougher for Pakistan as a third lengthy rain interval meant they had to score 289 runs in 41 overs to win the match. Pakistan were never in the chase as their openers made a sluggish start in the face of some disciplined bowling by the Indian pacers.

Ahmed Shehzad’s agony was ended in the 9th over by Bhuvneshwar Kumar as he trapped the right-hander plumb in front of the wicket. The highly-rated Babar Azam also departed early, after Ravindra Jadeja took a sharp catch at backward point off the bowling of Umesh Yadav in the 13th over of the innings.

Azhar Ali survived a dropped chance to make his way to a half-century, but his innings never had the fire needed by Pakistan at the top of the order to chase down the big total. He was sent back by Ravindra Jadeja for 50.

The match thereafter lost intensity as Pakistan’s batsmen hardly posed any threat to India, with the asking rate going up almost after every over. Pakistan’s innings came to a close in the 34th over as the injured Wahab Riaz didn’t bat.

Earlier, India’s start was a fairly sluggish one as the duo of Rohit Sharma and Shikhar Dhawan played cautiously. The innings was interrupted by rain after 9.5 overs were bowled, with India trudging along at 46 for no loss. The fifty-minute break gave the openers some fodder to think about when they came out, both Rohit and Dhawan meant business.

Rohit Sharma hit leg-spinner Shadab Khan for a six over mid-wicket to bring up his half century in 71 deliveries in the 19th over. And then Shikhar Dhawan cut loose by hitting Wahab Riaz for three consecutive boundaries in the next over to provide momentum to the innings and also brought up his half-century in just 48 deliveries.

Dhawan was dismissed for 68 off 65 deliveries in the 25th over, as he hit a Shadab Khan full-toss straight down the throat of deep mid-wicket.

Virat Kohli joined Rohit Sharma in the middle and hopes of the Indian captain demolishing the Pakistan attack yet again came alive as he first hit a boundary off Imad Wasim by delicately opening the face of his bat and then stood tall to slap a Mohammad Amir short delivery to the boundary over the gully region.

Another rain-break meant the match was reduced to 48 overs per side and with the Duckworth and Lewis method favouring the team batting second, India needed to move along quickly.

Rohit finally cut loose in the 36th over, hitting Wahab Riaz for a boundary and a six off consecutive deliveries. Rohit thought was run out for 91 off 119 balls in the next over.

India needed some impetus and Yuvraj Singh and Virat Kohli were the team’s best bets to provide it. The moment of reckoning came when Yuvraj was dropped on 8 by Hasan Ali off the bowling of Shadab Khan. Yuvraj misread the wrong one and his attempted hit over the bowler’s head landed at long-off but Hasan made a mockery of the chance.

After that reprieve, the southpaw never looked back. He unleashed an array of attacking shots to punish Pakistan. He was extremely destructive against Wahab Riaz and Hasan Ali.

Kohli, who was still not getting the boundaries away was dropped on 43 by substitute fielder Faheem Ashraf. What happened after that seemed like a perfect script of the wheels coming off Pakistan’s bowling wagon yet again.

Mohammad Amir hobbled off the pitch with a suspected knee injury without completing his quota of overs and that allowed India to take control. Kohli and Yuvraj took Wahab Riaz and Hasan Ali to the cleaners.

Hardik Pandya added the final touch by hitting three consecutive sixes in the final over off Imad Wasim to help India finish with 319/3 on the board in their 48 overs. Yuvraj Singh was the real star with a cameo of 53 off just 32 deliveries. Virat Kohli further cemented his credentials as Pakistan’s biggest nemesis by staying unbeaten on 81 off 68 deliveries.

India next take on Sri Lanka at the Oval in London and victory in that match will all but seal their place in the semi-finals.