Home » News » Chamundeshwari Rathotsava held amidst a sea of devotees 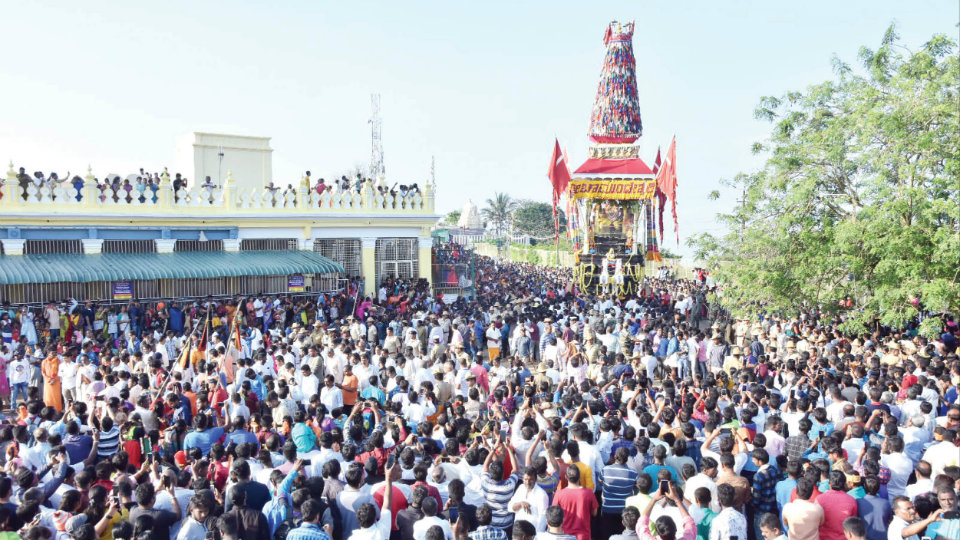 Chamundeshwari Rathotsava held amidst a sea of devotees

Mysuru: Chamundeshwari Rathotsava, the first event atop Chamundi Hill post Vijayadashami, was held this morning in the presence of thousands of devotees who had flocked the hill temple right from early morning to seek the blessings of the presiding deity.

Titular head of the Mysore Royal family Yaduveer Krishnadatta Chamaraja Wadiyar launched the Ratha in the auspicious Tula Lagna between 6.45 am and 7.18 am in the presence of Chamundeshwari MLA G.T. Devegowda and Mayor Pushpalatha Jagannath, even as the chanting by devotees – Jai Chamundeshwari Devi reached a feverish pitch.

The Ratha (Chariot) after traversing around the temple, returned to the temple main gate at 8 am, with devotees threw fruits at the Ratha and sought blessings of Goddess Chamundeshwari.

Prior to the launch of the Rathotsava, Yaduveer offered special prayers to the deity. Temple priests led by Chief Priest  Dr. Shashishekar Dikshit  performed the rituals and installed the idol of Goddess Chamundeshwari in the Ratha (Chariot), even as the Police Band performed and the Police ignited a cannon placed on a trolley.

The Teppotsava will take place at Devikere atop the Hill on the evening of Oct.15, thus marking the end of Dasara celebrations this year.