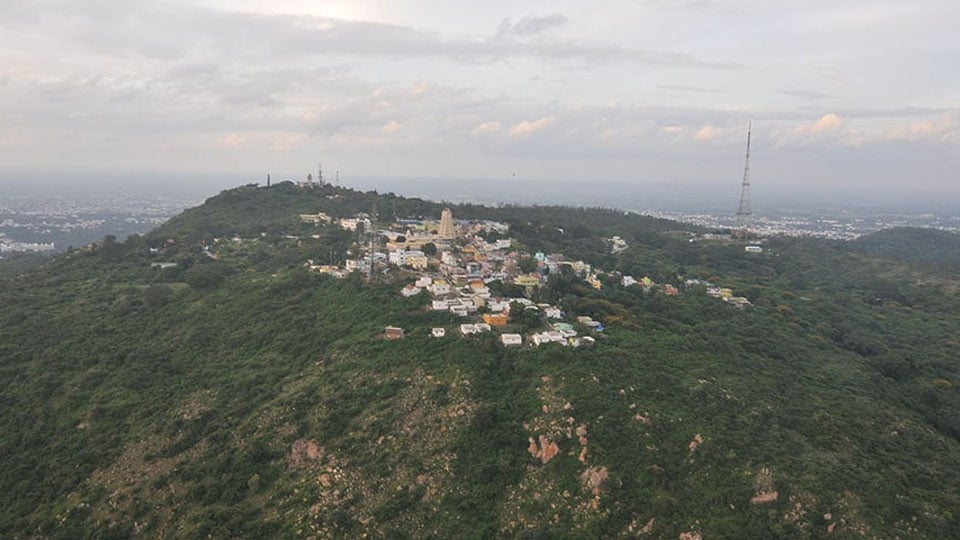 Mysore/Mysuru: The State Government will go ahead with the ambitious ropeway project at Chamundi Hill amidst stiff opposition from Green groups who are up in arms against the project as they fear that the project will not only spoil the environment but also disturb the sanctity of the religious destination.

Minister for Tourism, Environment and Ecology C.P. Yogeeshwar was speaking to reporters at Talakad last evening after announcing the Gangotsava celebrations that will be organised to recall the contributions of Ganga rulers in the field of art, sculpture and literature.

“We will take up the ropeway project at Chamundi Hill in such a way that it will not spoil the atmosphere,” he said while allaying the fears of environmentalists.

It may be mentioned here that on July 15, the Minister held a review meeting of his Department officials at Kumarakrupa Guest House in Bengaluru where the Chamundi Hill ropeway project was discussed along with a similar project for the world-famous Nandi Hills, which has been pending for a long time.

Yogeeshwar directed the Department officials to take up the project for building the ropeway to Nandi Hills, which has been pending since several decades after it was first mooted, to do the necessary paperwork for inviting tenders to go ahead with the work.

He also directed officials to draw a plan of action for the Chamundi Hill ropeway project.

On the Heli Tourism project that has hit rough weather as more than 600 trees would be cut near the Lalitha Mahal Palace to facilitate docking station, Minister Yogeeshwar said that the Heli Tourism will kick-start from the existing airports and would soon take off in Mysuru as well with a revised plan. The Minister, however, did  not elaborate.

He also spoke about the Mysuru circuit and Talakad circuit to facilitate the visit of tourists to various destinations in Mysuru and Talakad. “The circuit will be formed in such a way that all places of tourist interest in Mysuru, Kodagu and Talakad will be included so that it can prompt tourists to stay longer, boosting the economy. I will discuss the feasibility of conducting Gangotsava with different Departments like the annual Dasara in Mysuru so as to ensure comprehensive development of the infrastructure,” he added.