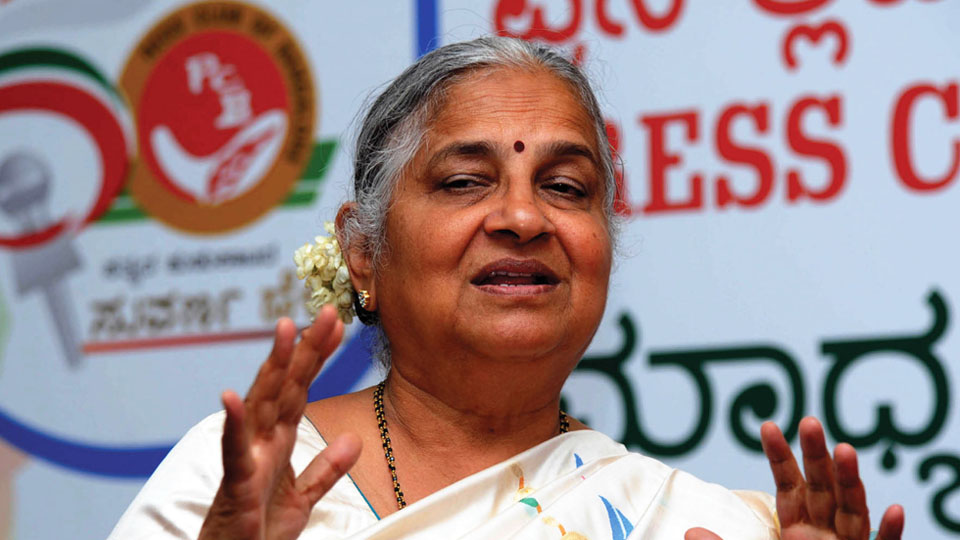 Chance to open Dasara was like securing a rank: Sudha Murty

Bengaluru:  Padma Shree award winner Sudha Murty, writer, philanthropist, and Infosys Foundation Chairperson, is all set to inaugurate the 10-day Dasara festivities atop the Chamundi Hill in Mysuru on October 10.

At a Meet-the-Press programme, jointly organised by the Bengaluru Press Club and Bengaluru Reporters’ Guild in Bengaluru last evening, Sudha said that she was honoured to inaugurate the festivities. “I felt that I have secured first rank in academics the moment the news was out that I will be invited to open the festivities,” she said and added, “I had not even dreamt of opening such a grand event.”

Sharing her affinity with reporters, Sudha Murty said, “I still remember the first time I went to Mysuru in 1958 where I visited several places including Krishna Raja Sagar (KRS) Dam and Bannimantap. I also watched a movie. Moreover, Mysuru is my mother-in-law’s place.”

“The earlier Dasaras were inaugurated by towering personalities like Dr. Chandrashekhar Kambara, Nityotsava poet Dr. K.S. Nissar Ahmed, singer Gangubai Hangal, actor Dr. Rajkumar and littérateur Baragur Ramachandrappa and it is my good fortune that I will be inaugurating the festival this year,” she said.

Paying tributes to the royal family of Mysuru, she said the State owed the Mysuru Maharajas for protecting Kannada heritage and culture by organising the Nada Habba Dasara during their reign. “Even when I was young girl, I went to Mysuru with my parents just to see the grandeur of the celebrations, which are an attraction even today. Dasara is an integral part of our identity, it’s our State’s identity,” she said.

Although Karnataka, prior to its unification, had many princely States with  Bombay-Karnataka governed by the Maratha rulers, Hyderabad-Karnataka under the Nizams of Hyderabad and the Kasaragod region ruled by Malayalam speaking monarchs, it was only the Mysuru Maharajas who protected and propagated Kannada language and  heritage, she said.

“For this work of our Maharajas, we must forever remain indebted to them,” she said. She revealed that she would be part of the Dasara festivities organised by both the State Government and the Mysuru royal family. “I do not wish to take sides. I will go to the Maharaja’s house also. I am going as a guest. We Kannada people remained united because of the Maharajas of Mysuru. There is no need for such debates,” she clarified.

Asked for her views on the demand in some quarters for a division for Karnataka, Sudha Murty said she could not imagine such an eventuality. “I do not agree with this. I hail from North Karnataka and my husband is from Mysuru. So I would always want Karnataka to remain united,” she said.

Sudha Murty is the Chairperson of Infosys Foundation. She did BE in Electrical Engineering from BVB College of Engineering and Technology, Hubballi. She stood first in Karnataka for which she received a gold medal from the Chief Minister. She also completed her M.Tech in Computer Science in 1974 from the Indian Institute of Science (IISc.), Bengaluru, stood first in her class and received a gold medal from the Institution of Engineers-India (IEI).

She started her career as a development engineer with TELCO (now Tata Motors) and has also taught Computer Science at Bangalore University. She was also the first woman engineer to be selected in TELCO. She had written a postcard to JRD Tata complaining of the gender bias in TELCO (the company then had a men-only policy) and she was invited for a special interview and was appointed as a Development Engineer at TELCO.

She was living in Pune from 1974-1981 and later she moved to Mumbai. It was her savings of Rs.10,000 that was instrumental in the founding of Infosys. Her husband and Infosys Founder N.R. Narayana Murthy proudly mentions this fact on several occasions.

Sudha Murty is a prolific writer in Kannada and English. She is a columnist for English and Kannada dailies with 24 books and 156 titles to her credit — including novels, non-fiction, travelogues, technical books and memoirs. Her books have been translated into all major Indian languages. She has been honoured with awards for her philanthropic and literary efforts.

She has also received the Padma Shree Award from the Government of India as well as seven Honorary Doctorates from Universities in India.