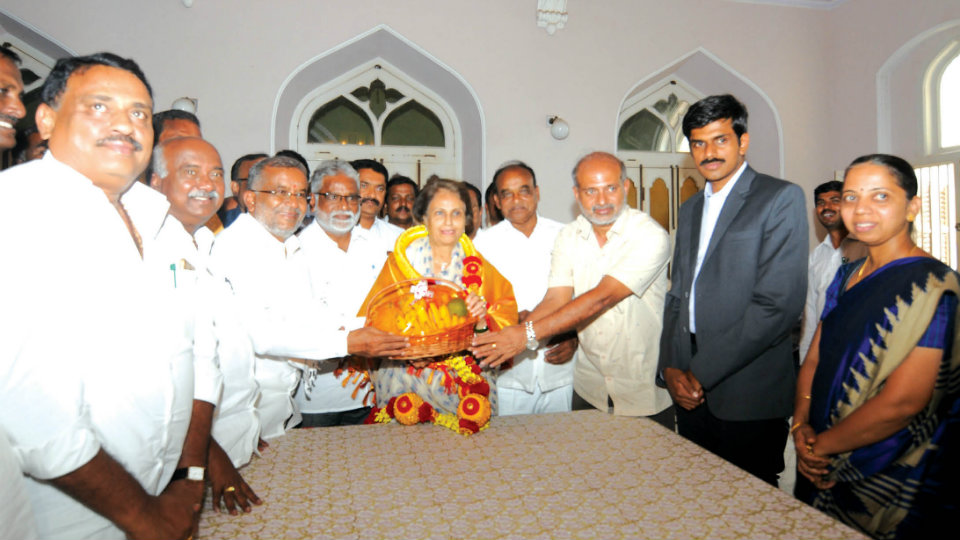 Mysuru:  With the ten-day Dasara festivities to commence from Oct.10, the District Administration on Saturday extended an official invitation to member of erstwhile Royal family Pramoda Devi Wadiyar.

District Minister G.T. Devegowda, accompanied by other Ministers — S.R. Mahesh, N. Mahesh and C. Puttarangashetty — visited the city Palace yesterday and extended the invitation to Pramoda Devi Wadiyar by presenting her a shawl and phala tamboola.

Speaking on the occasion, G.T. Devegowda said that the invitation was as per the tradition followed for decades and Pramoda Devi Wadiyar was happy to receive the invitation.

Pointing out that the DC will present the Royalty cheque to the Royal family as soon as it is received from the Government, the Minister said that Pramoda Devi has assured full co-operation from her side for Dasara.

Noting that there were many aspirants for Dasara Sub-Committees nominations, Devegowda dismissed allegations that the Congress party was being neglected in Dasara preparations.

Maintaining that it was the duty of everyone to see that the Palace honour is kept intact, Devegowda said that Congress MLA Tanveer Sait was very much part of Dasara and there was no question of neglecting him.

Pramoda Devi Wadiyar said that she has been officially invited for Dasara as in the past and she would extend full co-operation to the Government.

Tourism Minister S.R. Mahesh said that a special feature of this year’s Dasara would be a performance by Chinese artistes at Dasara Exhibition. He also highlighted the initiatives launched by the Government for attracting a much larger number of tourists for Dasara.