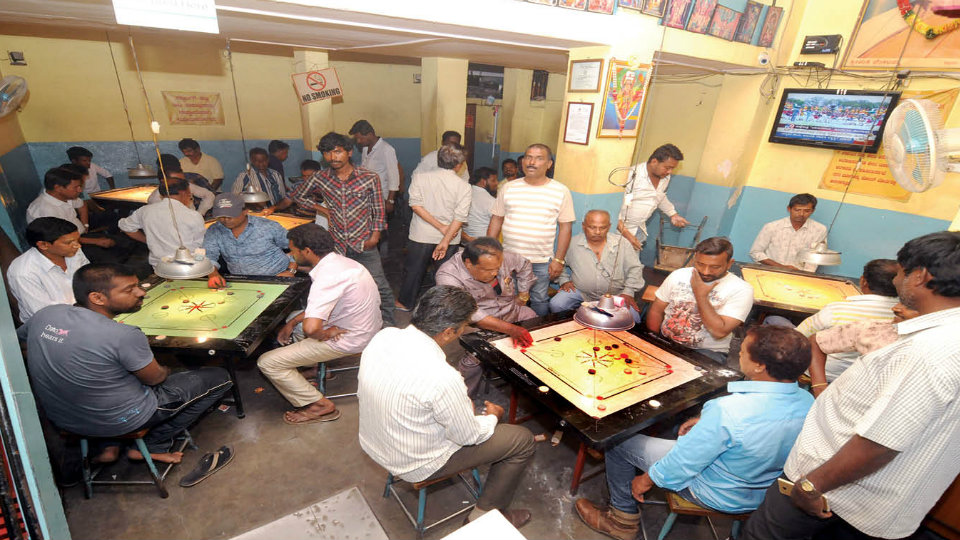 In a narrow bylane of Devaraja Mohalla, a buzzing Carrom Club comes to life every evening and there is literally no place for one to stand during weekends and holidays. Men in groups gather here to pursue their passion — the game of Carrom.  A plain look at the gully gives one a view of over 100 two-wheelers neatly parked on one side of the road. Enter the gully and walk a few metres, one will find Sri Shabarisha Carrom Association. The gully is opposite the Rajkamal Theatre, Shivarampet behind Katappa Garadi Road.

Every evening, people gather here to play their favourite board game after a hard day’s work. The excitement is palpable, as men crowd around to play or watch. If the tables are full, they are desperate and patiently wait for their turn to chase the Queen.

Carrom remains a community affair here, a tradition that has been religiously followed since the last 10 years. Along with the game of Carrom, players discuss politics, their favourite leader and which party is likely to rule the country after the forthcoming LS polls. Of course, there is agreement and no quarrels regarding political affiliations. For them, the game is supreme and a favourite way to spend the evening, holidays and weekends.

“It helps us reconnect and share our sorrows and happiness while playing our favourite game,” says R. Surendra, Secretary of Sri Shabarisha Carrom Association. The game is serious and intense. People come here just for the passion of the game. It is a leisure activity and a great way to bond and relax, he adds.

Earlier, there were many Carrom Clubs in Mysore in areas such as Ashokapuram, Shivarampet, Shanthinagar, Mandi Mohalla and Devaraja Mohalla. But betting mafia forced the City Police to close down many Clubs. “This affected genuine Clubs that did not encourage betting. Every Carrom Club was looked at only one angle — they indulge in betting. This forced us to formally register and form an Association. Initially, we started as a coaching club. Then came licence, stringent rules and regulations. We formed the Association and the game goes on, without the vices of betting,” Surendra explains.

Apart from Sri Shabarisha Carrom Association there is only one more registered Carrom Association at Shanthinagar in city, Surendra claims. “We are affiliated to Karnataka State Carrom Association in Bengaluru and we have 180 members.  A membership fee of Rs. 75 is charged and a nominal Rs. 10 is levied for a single game and Rs. 20 for doubles,” he says.

There are seven well-lit tables in the Association and each table can accommodate four players. “At any given point of time, there are 15 to 20 people playing the game and the crowd swells in the evening and the hall is jam-packed during weekends and holidays. Every day, over 100 people play here. We conduct tournaments for members and we provide boards and referees for other people to conduct tournaments,” Surendra says.

Last year, the Association tried to include Carrom as one of the games during Dasara Sports. “That did not materialise. This year, we will try again. After all, this is a mind game like chess and anybody can play as it relaxes the mind and body after a strenuous work schedule,” he says.

The Carrom Club opens between 10.30 am and 9 pm and many people come from far off places. Like 56-year-old Shankar Singh, who comes from Jayanagar. An employee of Backward Class Department, Singh has been playing the game since 45 years and this Association has given him a platform to exhibit his talent.

“I am a State-level player and have won many championships, the recent being the one at Ballari. Many players come here and I have seen players coming from Chennai and Kolkata rubbing shoulders with local players at this Association,” he says.

Fifty-three-year-old Manjunath, who works as a tourist guide, comes from Hebbal to play Carrom. “I have been playing this game since the last 20 years and have many friends here. The game attracts all of us like a magnet. We forget tensions and spend some quality time playing the table-top game,” he says with a smile.

While Carrom has become an old-school game and is hardly played in households any more as the youth are hooked on to games on their mobile phones and gaming laptops, kudos to Associations like this for keeping the spirit of the game alive.