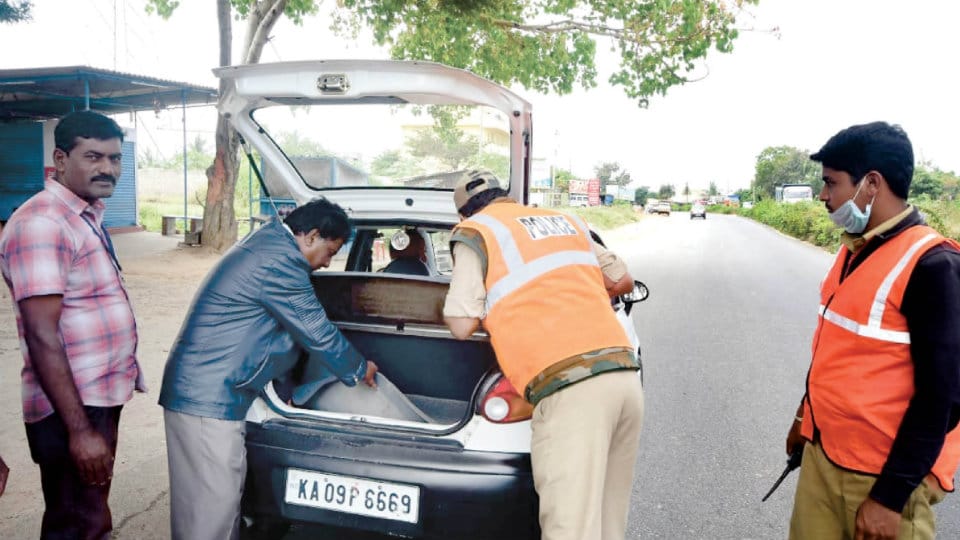 Mysuru: Following the seizure of Rs. 2 crore unaccounted cash that was being transported in a jeep at Manuganahalli Check Post between Yelwal and Bilikere late on Tuesday night, checking has been intensified in poll-bound Hunsur.

Each vehicle is being stopped and Police and election officers are scanning them for cash, gifts and liquor. By-election to Hunsur Assembly Constituency is scheduled on Dec. 5.

Today morning, Rs. 52.6 lakh cash was seized at Nidaghatta Check Post near Maddur. Wads of currency notes were bundled and packed in polythene covers. The bundles were concealed inside a car. The car is owned by one Aditya of Hosur in Tamil Nadu and as per the Check Post officials, there were no valid documents for the cash and the Police have seized the same. Officials suspect that the cash was being transported to woo voters in K.R. Pet that is also going to polls on Dec. 5.

The cash that was seized on Tuesday was being transported from Mysuru by two persons who claimed that they were the employees attached to Mysuru-Chamarajanagar District Central Cooperative Bank (MCDCC) and they were transporting the cash to Periyapatna branch of the Bank. As the vehicle did not have mandatory security and there were no supporting documents for cash, election officers seized the cash.

Check Posts have been set up at all entry and exit points in Hunsur and barricades have been erected to stop vehicles that are entering and exiting Hunsur. Suspicious vehicles are thoroughly checked. Commissioner for Survey, Settlement and Land Records Munish Moudgil has been appointed by the Election Commission to oversee the day-to-day functioning of enforcement agencies like the Police and Excise for the ensuing Hunsur by-poll.