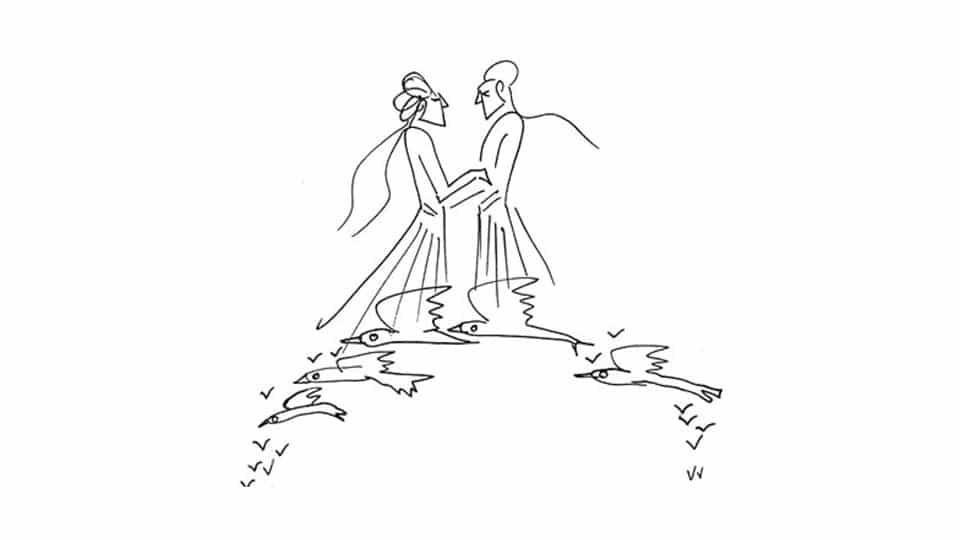 Once upon a time there was a weaver girl who loved a cowherd. But she was no ordinary weaver girl; she was the daughter of the Goddess of Heaven and she wove clouds for the sky. She came down to earth for fun, met the cowherd, married him and had two children. They lived happily until her mother dragged her back to the sky. An ox told the heartbroken cowherd to kill him and use his magical hide to rise to the sky.

The cowherd did this and rose to the sky with his two children. Annoyed, the Goddess of Heaven used a pin to scratch the sky creating the silver river or Milky Way that separated the two lovers who eventually turned into stars.

But once a year, out of pity for the separated lovers, magpie birds create a bridge across the silver river and enable the husband to meet his wife and their children to spend time with the mother. This marks the annual Chinese Qixi festival celebrated on the seventh day of the seventh month of the Chinese lunar calendar, roughly in August each year.

This is one of the four major Chinese folk tales, all composed over 2,000 years ago and retold and re-framed several times. All of them revolve around the theme of love.

In The Legend of the White Snake, we learn of the rivalry between a white snake and a turtle. The white snake turns into a woman and marries a man, and their son eventually joins the imperial bureaucracy. The turtle turns into a man, disguises himself as a Buddhist monk, and tries to break them apart using Taoist magic. The white snake fights back, and protects her husband, with the help of her sister, the green snake.

The idea of animals turning into humans and magic powers obtained through training and penance is part of Taoist beliefs, while love and piety displayed by wives for husbands, children for parents and friends for each other are all part of Confucian philosophy. The Buddhist monk jealous of a happy conjugal relationship reveals the Chinese’s initial hostility to the monastic order.

Then there is the story of the youngest daughter of a rich family called Zhu who disguises herself as a boy in order to gain access to a learning academy where she falls in love with a poor boy, a fellow student called Liang, who also becomes fond of ‘him’. Feelings develop that he cannot explain until she reveals her true identity. But the lovers are separated when the girl’s father fixes her marriage with an aristocrat. Heartbreak kills Liang and strong winds prevent Zhu’s bridal procession from proceeding beyond his grave. The grave opens and Zhu jumps in to join her beloved. Their spirits emerge as a pair of inseparable butterflies.

Finally, there is the tale of a lady who travels to the Great Wall of China carrying winter clothes for her husband who has been forced into imperial service there. On reaching she learns he is dead and searches for his corpse. Her tears cause a portion of the wall to collapse revealing the bones of her beloved husband.

Chinese culture may seem alien to us, but the emotion of love enables us to connect with these stories, and through it with the hearts and minds of the Chinese people.