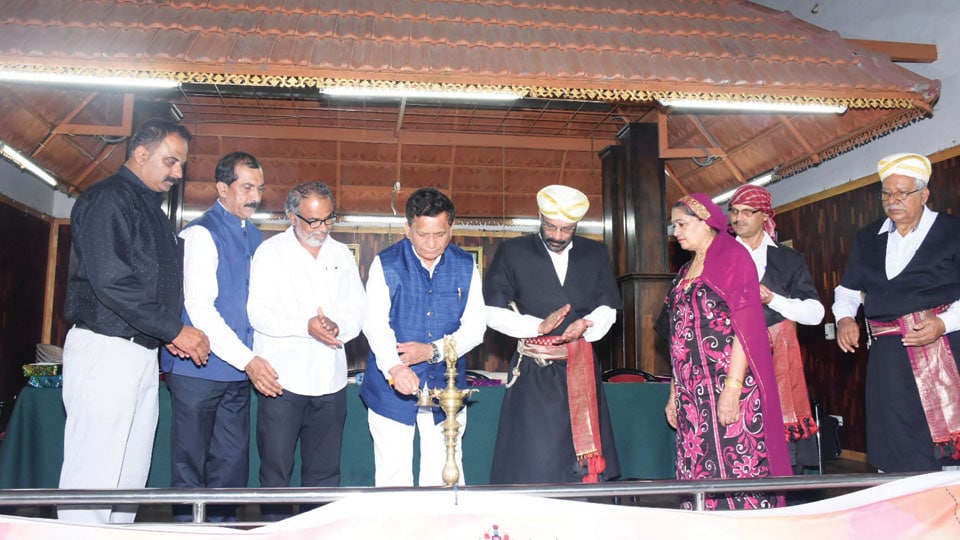 Chorus to accord third language status for ‘Kodava Thakk’ grows

To help the inclusion of language in Eighth Schedule of Constitution

Mysore/Mysuru: Stating that the demand for third language status for ‘Kodava Thakk’ (language) is being considered at the Government level, Virajpet MLA K.G. Bopaiah observed that such a status will help include the language in the Eighth Schedule of the Constitution.

He was speaking after inaugurating  the seminar on “Inclusion of Kodava Language in the Eighth Schedule of the Constitution” and a book release programme jointly organised by Karnataka Kodava Sahitya Academy and Kodava Samaja, Mysuru at Kodava Samaja auditorium in Vijayanagar First Stage here this morning.

Observing that those who left Kodagu district to settle elsewhere must not forget their native land and  mother-tongue, Bopaiah, who is also a former Assembly Speaker, said that natives of Kodagu, especially the youths, should take pride in Kodava language and culture wherever they stay.

Stressing on the need for saving Kodava language and culture for generations to come, the MLA assured that he will extend all support for inclusion of the language in the Eighth Schedule of the Constitution. He also called for a much organised and united effort for pursuing the cause with the Government.

Karnataka Kodava Sahitya Academy Chairperson Dr. Ammatanda Parvathi Appaiah said that Kodava language must be declared as the third language in Karnataka and a resolution must be passed in the Assembly.

Noting that Kodava is a Dravida language having its own culture, identity and history, Parvathi Appaiah regretted that the language has not been included in the Eighth Schedule despite meeting all the requirements.

“The primary reason for this is the small numerical strength of the community and lack of political power. When former Bengaluru Mayor Prema Cariappa was a Rajya Sabha member, she had taken up the cause. But after her term ended, no one pursued the cause,” she noted.

She said that the Academy has been collecting and collating all available records in support of the demand for inclusion of the language in the Eighth Schedule. Stating that Mangalore University is already offering certificate and diploma courses in Kodava language, she said that the Academy is making efforts to teach Kodava language to PG students.

Ajjinikanda Mahesh Nachaiah, Editor of ‘Poomale’ weekly, who delivered a talk on the seminar topic, said that though Kodava is a language spoken by a small group of people, it has succeeded in retaining its importance and significance, besides its own identity.

Contending that Kodava language has found mention even in mythology, he said that Kodavas are a population which grew and prospered in Cauvery valley civilisation. Asserting that Kodava has its own place in Indian folklore, he opined that the influence of Kodava language began to wane after Kodagu was merged with Karnataka. Noting that there are 22 official languages in the Eighth Schedule, he said that the Government must not delay in the inclusion of the language, considering the fact that the language has its own identity.