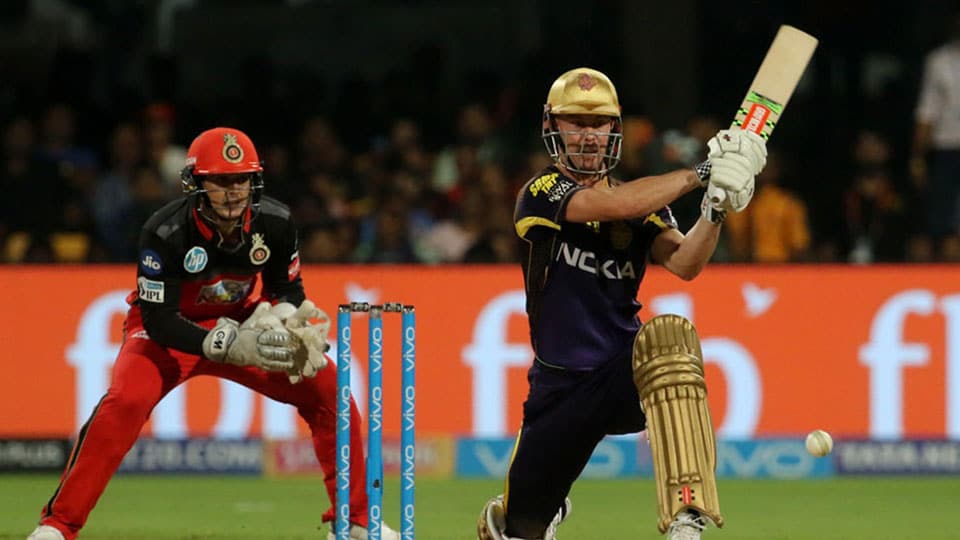 Opener Chris Lynn anchored his innings to perfection as Kolkata Knight Riders (KKR) were back to winning ways with a comfortable six-wicket win against Royal Challengers Bangalore (RCB) in an IPL encounter last night.

Chasing a competitive target of 176, KKR reached the target in 19.1 overs with Lynn scoring an unbeaten 62 off 52 balls with seven fours and a six.

KKR captain Dinesh Karthik relishing his new found role as a finisher, played his part with a 10-ball-23 to make it easy in the end.

Chris Lynn was chosen as the ‘Player of the Match.’

Siddarth Kaul (2/23), Sandeep Sharma (1/15) and Yusuf Pathan (1/14) bowled well for Hyderabad and helped their team edge Rajasthan in a last-over tie. Rajasthan skipper Ajinkya Rahane remained unbeaten on 65 runs but couldn’t take his team towards victory. Sanju Samson (40) supported his skipper but a lack of partnerships after his dismissal didn’t help Rajasthan’s cause.

Earlier, a stellar bowling display in the final overs by Rajasthan helped them restrict SRH to 151/7. Krishnappa Gowtham gave Rajasthan a solid start after dismissing Shikhar Dhawan for six runs in the third over.

After his dismissal, SRH skipper Kane Williamson (63) continued his fine form with a solid fifty. He was ably supported by Alex Hales (45) to help his team post a decent total. However, Rajasthan took control of the proceedings with some fine bowling by Archer (3/26) and Krishnappa  (2/18).

Kane Williamson was chosen as the ‘Player of the Match.’