Home » Feature Articles » ‘Ramayana’ as a tribute to Lalgudi Jayaraman ‘Ramayana’ as a tribute to Lalgudi Jayaraman

On the 21st of April, popular musician and Harikatha exponent Vishakha Hari gave a musical discourse at Mysore Vasudevacharya Bhavan, Mysuru. The event was organised by Raga Vaibhava. Vishakha was accompanied by Charulata Ramanujam on violin, Arjun Ganesh on mridanga and S. Manjunath on ghata. The three-hour event enchanted the audience who were glued to their seats till the end.

‘Ramayana’ as a tribute to her Guru Lalgudi G. Jayaraman was the topic of the day and Vishakha covered the story from the very beginning where Sage Valmiki asks Rama ‘Konvasmin Sampratam Loke gunavan kascha veeryavan’ meaning who is the one in this world who is handsome, known for his valour, kind, who always follows Dharma and is truthful, who possesses good character, is devoid of jealousy, good in art and at his heart?

Vishakha extolled the virtues of Rama, attributing  them to her Guru and said Jayaraman owned all these qualities of Rama and lived every moment of his life for people as Rama did. Just as Rama had his bow in his hand, Jayaraman had his  bow (pun) in his hand and enthralled the world with it. (This statement caused many elderly eyebrows in the hall to raise, as Vishakha’s opening of her recital with Tyagaraja’s ‘Samanamevaru’ in Kharaharapriya,  which goes to explain who could be equal to Rama was somewhat ironic).

Vishakha also highlighted Lalgudi’s virtue as a trend setter. Previously it was enough if the violinist as an accompanist knew the swaras to follow. But Lalgudi was not satisfied with this. He insisted that the violinist and also the mridangist should know the mood of the composer. He was a musician who saw music (sangeeta) in lyrics (sahitya) unlike other musicians who see sahitya in sangeetha. And measure was like salt to him. He would not overdo anything — be it birgas or sangatis as Bhava was most important to him. Lalgudi also gave prominence to the sahitya and the right split in the lyrics. Why the right split in sahitya is important was explained humorously by Vishakha illustrating ‘Karamuna Shara Kodanda kanti’ in ‘Nannupalimpa’ Kriti, which is wrongly split by many as ‘Karamuna Sharako Dandapani’ which would change the entire meaning as the composition is on Rama who is Kodanda Pani and not on Subramanya who is Dandapani. Lalgudi learned Telugu to understand the mood and sahitya of the composition. More than 50-60 compositions of Tyagaraja which were not on the concert platform like ‘Enta muddu (Bindumalini) and Nadaloludai (Kalyana vasanta) were brought to the fore by Lalgudi. He would grammatically analyse each composition and improvise on the sangatis in each one of them. That is why his violin was known to ‘sing.’ The swaras he played were pleasing to the mind and soothing to the ears. Every syllable was loaded with melody. 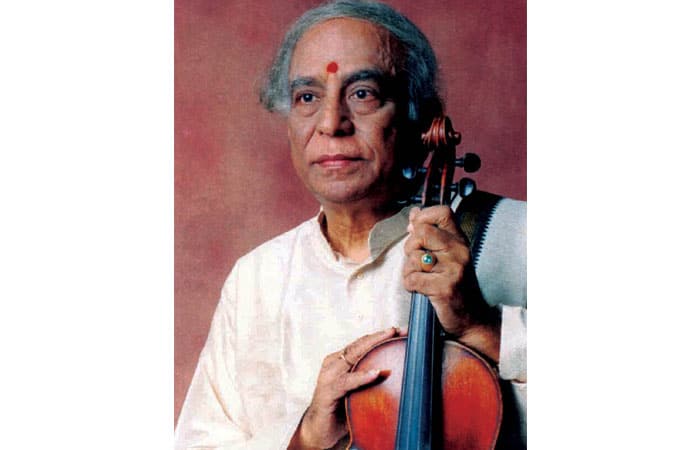 ‘Marugelara’ of Tyagaraja was demonstrated beautifully by Vishakha explaining the importance of how each sangati in the pallavi is to be sung comprehending the meaning. Rama had tears welled up in his eyes on hearing his own story from his sons Lava and Kusha. Immensely facilitated Vishakha weaved seamlessly into the story of Ramayana covering the story till Seeta Kalyana, quoting shlokas fluently from the original text and also choosing contextual compositions of great vaggeyakaras. The rendering of the story as well as the music compositions was matchless and full of charm. The music she offered with her team was sublime.

READ ALSO  A Day of Fulfilment

Explaining the key letter ‘r’ in Om Namo Narayanaya’ and ‘m’ in Om Namah Shivaya’ Vishakha explained how the word RAma emerges as a combination of both these key letters. She presented ‘Nadaloludai’ and ‘Enta muddu’ as in a concert suffixing them with swaras in the Lalgudi bani. Speaking about Dasharatha’s Putrakameshti yaaga, Vishakha brought out the importance of annadaana (donating alms) cleverly knitting Purandara Dasa’s ‘Ragi tandira’. The breath-taking way in which Vishakha switches to any raga even as she is totally involved in the story is amazing.

As a tribute to Lalgudi Jayaraman, Vishakha had also composed an RTP in Simhanandana, the longest tala in the world of music. 37th of the 108 talas, Simhanandana is a complicated tala with 128 beats, 512 aksharas and 18 angas. The angas of this tala are Guru-Guru-Laghu-Plutha -Laghu-Guru-Dhruta-Dhruta-Guru-Guru-Laghu-Plutha-Laghu-Plutha-Guru-Laghu-Laghu-kakapada. Singing a pallavi in this tala is not every musician’s cup of tea.  This tala requires immense practice but Lalgudi played this tala at the age of 16 with no rehearsals. Vishakha sang the raga shortly, Charulata played a charming tana and the pallavi was performed enthusiastically by the entire team with also a short taniyavartanam.

Vishakha provides ample opportunities to her accompanists to exhibit their talent unlike in other Harikatha performances. Rama’s beauty as encountered by Janaka was described with  Mysore Vasudevachar’s ‘Ra Ra Rajeevalochana Rama’ in Mohana. On hearing Lalgudi play this composition Mysore Vasudevachar is believed to have said, ‘I only composed it. But you have infused life into it’.

Vishakha also spoke of other important matters in life like maintaining our tradition and how to teach our children to maintain our culture and said that one should always have a sense of belongingness to the town or village he/she comes from.  The performance came to a close with the glory of Seeta Kalyana with Tyagaraja’s ‘Pavanaja Stuti patra pavana charitra’ in Kuranji.