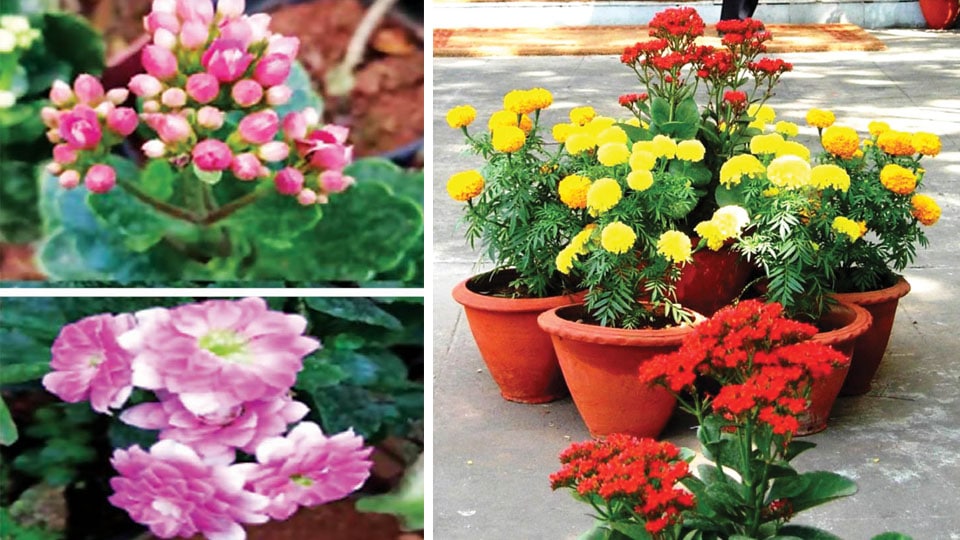 During the late winter, local plant nurseries are flooded with an innumerable variety and flowering annuals. Among these, Kalanchoes with blooms in of stand apart.    eye-catching and most sought after plants known for their fleshy leaves and vibrant blooms. Like poinsettias, staples of the holiday and florist trade during season.

Originally from Madagascar, Kalanchoes are succulents, meaning they have thick stems and fleshy leaves with abundant water stored in them to endure drought conditions.  The genus Kalnchoe includes more than 100 species and Kalanchoe blossfeldiana is the most popular one with many hybrids valued for interesting leaf forms and multi-coloured blooms. English names are ‘Christmas kalanchoe’, ‘Flaming Katy’, ‘Florist kalanchoe’ and ‘Madagascar widow’s-thrill.’ The generic name Kalanchoe is derived from ‘Kalanchauhuy’, a Chinese name and the specific epithet blossfeldiana is in  honour of German Botanist Robert Blossfeld, who first introduced the plant to the rest of the world in 1932.

Kalanchoe blossfeldiana is a small evergreen compact bushy plant, perennial in character, but generally treated as an annual growing to a height of  1 – 1.5 ft. It branches from the base. The fleshy leaves are ovate oblong in shape and lie opposite in pairs on stems. The most attractive part of the plant is the inflorescence classified as ‘pniculated bracteates cyme.’

Clusters of tiny, tubular flowers held on top of long leafless stalks form the terminal portion of the branches like an umbrella giving it a spectacular appearance. Attractive dwarf varieties with various leaf forms and blooms of orange, pink, yellow, white etc., are now available.  However, the best bet is the traditional red variety “Red Star” (the mother plant in my view) for which the description is given.

Kalanchoes are  best grown during  winter season using ordinary soil with a small quantity of farmyard manure (FYM) or dried cow dung. However, the soil must be loamy with good drainage. They can be easily propagated  by stem, leaf or terminal cuttings (small branches) during the moist season. The recommended soil mixture is 1:1:1 (sand+red soil+FYM or a mixture of cow dung manure and leaf mould) with half a teaspoonful of  bone meal and a pinch of lime if the soil is acidic). The cuttings can be raised in containers directly or in flower beds. No transplantation is necessary. Being succulents they do not need much water. However, copious watering during the growth season is useful. They should be placed in a sunny position for flowering and their bloom is dependent on the length of the day as they need longer dark period. They take almost  3-4 months to flower. But the final display is worth the wait. Though they are tropical in nature they need only moderate light and temperature and get scorched if exposed to the hot sun.

Many varieties of Kalanchoe are right now sold in plant nurseries.

Christmas Kalanchoes Dr. Mahadeswara Swamy Tree facts
So much to explore in the World of Tubers
Man, woman go missing in separate cases