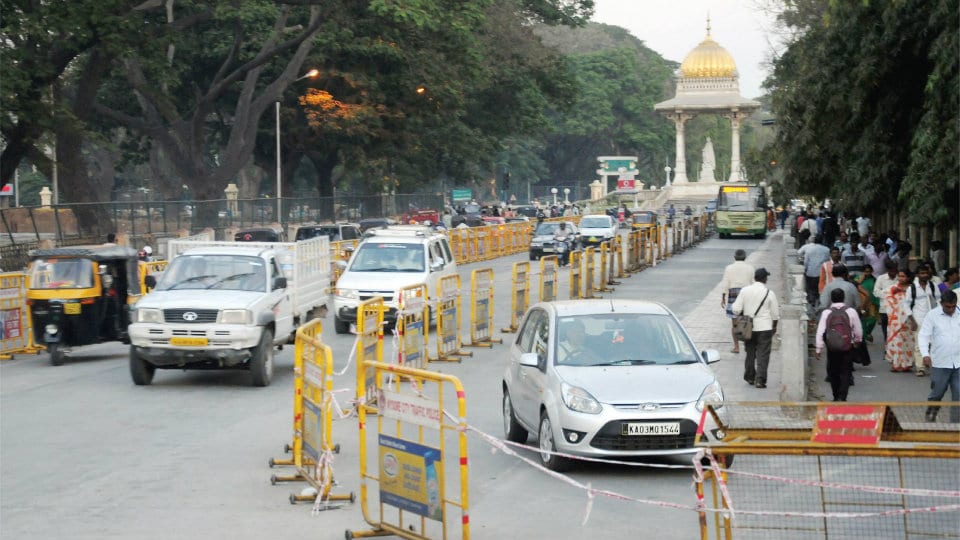 Daily there are 557 departures towards Bengaluru alone (115 non-stop luxury bus services, 310 non-stop Karnataka Saarige services [non A/C buses], and 132 Inter-state bus services). Bengaluru-bound departures  alone account for more than 20,000 passengers per day. Then there are an equal number of arrivals, both in number of buses and the number of passengers. This means that Bengaluru buses alone account for more than 1,000 buses and about 40,000 passengers; both incoming and outgoing. One can imagine the total load of this traffic alone on the Sub-urban Bus Stand.

Bus ready for departure at the Suburban Bus station

A photo of City Bus station.

Now this bus station is located at a corner of K.R. Circle, with entrance from Albert Victor Road (between two statue circles) and exit on Sayyaji Rao Road. All the buses coming to City Bus Station come from Albert Victor Road, and almost all the departing buses take turn towards MCC office on Sayyaji Rao Road. Congestion caused by these buses on these two roads has to be seen to be believed.

From the above facts and figures one can imagine how much of vehicular traffic is accounted by this Transport Triangle. One can argue that this triangle is only a consequence of the existence of CBD.  Even if it is so, a time has come to find out-of-the-box solutions before these roads become out of use due to chocking vehicular traffic.

All the wide footpaths in the CBD area are either slimmed down or have become not useful to the pedestrians. Like in Bengaluru, city bus drivers may soon refuse to drive on these chocked roads, if immediate solutions are not found.

Above steps will not only help reduce the passenger load on the city station but substantially reduce the vehicular traffic on the roads in the CBD. Similar steps have been taken in Bengaluru with the shifting of many operations first to Cantonment station, then to Yeshvanthpur station and now development of KR Puram station.

Should Mysuru wait for total collapse of the system before one considers rational solutions?

Shift the City Bus Station and re-design the routing pattern

It is time that the present City Bus Station, which is already chocking due to shortage of space and highly congested CBD roads is shifted out of the CBD. It seems to have outlived its utility and is more a main source of vehicular congestion in the CBD. The present city bus routes are structured mostly on a circular pattern. It is time to consider Radial Pattern in the light of newer bus stations available on the Ring Road or nearby Ring Road. Prof. Yedunandan, of S.J.C.Engineering College, who is also a Consultant Structural Engineer,  has developed Radial Loop system for the internal bus transport which can be considered here.

Sheer load of bus trips on Bengaluru–Nilgiri Road within the city demands that major operations of this bus station needs decentralization. Like in the case of heavy vehicles, now time has come to restrict the movement of sub-urban buses through the city roads. Bengaluru-bound buses can make use of Sathagalli Bus Station, near Narayana Hridyalaya, on the Ring Road. And, southern sector buses can be routed through a bus station on Ring Road there. So also, the Eastern and Western sector buses. These steps may be considered highly impractical at first. But since there is no alternative to them, one should hasten up to test them. Who could imagine that Mysuru-bound buses could be cut off from the main bus station at Bengaluru and shifted to the Satellite Bus station. Have not the travelling public gradually accepted this change?

Serious problems demand courageous decisions. Mysore Master Plan should have taken note of this problem, but did not. Now at least it is time that MUDA, MCC, RTO, and the Police department put their heads together to analyze the traffic problem emanating from the Traffic Triangle and take appropriate steps before it reach gigantic proportions. But, has it not already reached that stage?