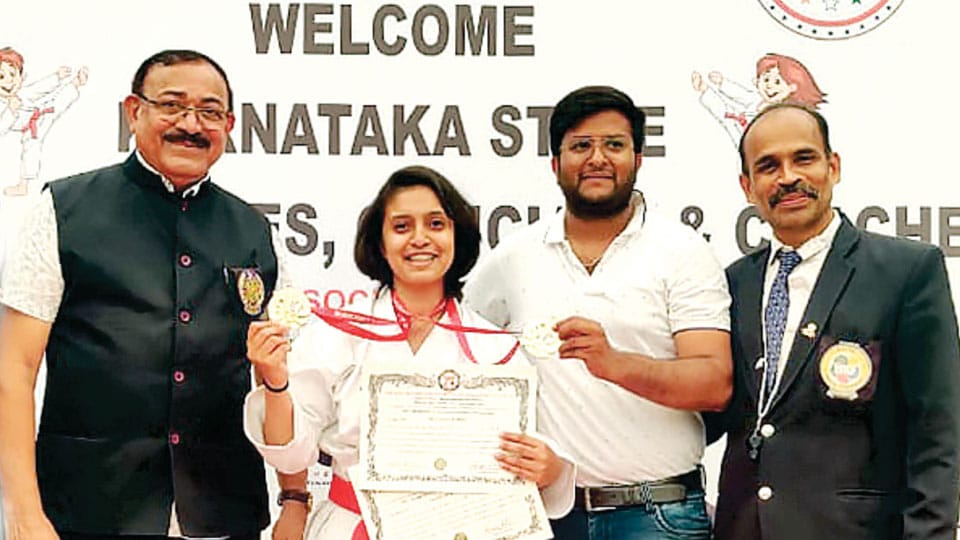 Reigning State U-21 Years and Senior Individual Kata Champion, city’s young Deia S. Urs, who took part in this Championship, successfully defended her No. 1 Ranking in both U-21 and Seniors Individual Kata categories by securing gold medals in both the events in the State Championship organised at District Indoor Stadium on Kalasapura Road in Gadag recently, under the aegis of the Akhila Karnataka Sports Karate Association (AKSKA), recognised by Karnataka Sports Authority, Govt. of Karnataka in association Chetan Karate Club.

With the new WKF point system followed at the Championships, in the U-21 Individual Kata category finals, Deia took gold by securing 23.28 points while Tejaswini K. Naik of Hubballi took silver with 22.28 points and bronze went to Saraswathi S. Adagall of Bagalkot who secured 21.75 points.

In the Senior Individual Kata category finals, Deia clinched gold by securing 19.72 points, N. Chaithrashree of Bengaluru took the Silver with 19.49 points and bronze was shared by Soudamani R. Desai of Dharwad and Vanditha Joshi of Kalaburgi with 19.39 points.

She is the only girl from Karnataka to represent Karnataka in both U-21 and Seniors Individual Kata category four times at the National Championship. Deia Urs, who has 3rd Degree Black Belt and is Ranked No. 2 in the U-21 years and No. 3 in the Seniors National-level, is trained by her father B.S. Srinath Urs, certified and accredited national coach.  Both practice under All India Shito Ryu Karate Do Union President Kyoshi C.S. Arun Machaiah.