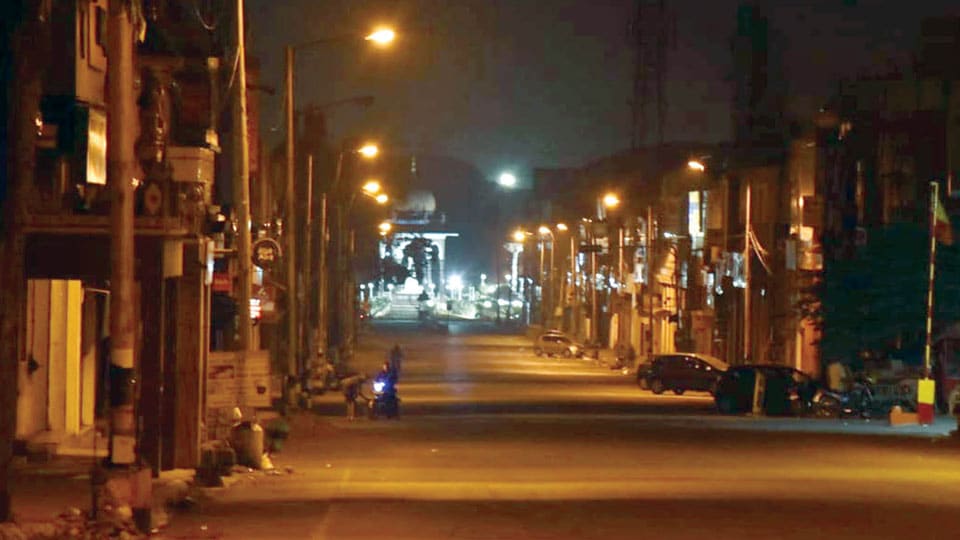 Mysore/Mysuru: The 10-day night curfew imposed by the State Government will come to effect tomorrow (Dec. 28) at 10 pm. As per the timings mentioned in the order issued yesterday, the night curfew will be in force from 10 pm till 5 am and the restrictions will end on Jan. 7, 2022.

The City and District Police have geared up to strictly enforce Government rules without any exceptions. Even on Dec. 31, rules will be tough and instructions have already been passed to each Police Station to enforce the rules and prevent the spread of virus. Large gatherings will not be allowed at any time and teams have been formed for micromanagement.

“Orders of the Government will have to be complied with and from tomorrow 10 pm, there will be severe restrictions on movement, except in case of emergencies. We will not trouble people who are going to hospitals and medical services and also essential services like the media. But all shops, business establishments, hotels, clubs and restaurants must be closed by 10 pm. Only medical shops can be opened,” City Police Commissioner Dr. Chandragupta told SOM this morning.

Police personnel and Home Guards from each Police Station will start making loudspeaker announcements and lay barricades from 9.30 pm to ensure that there is no one on the streets beyond 10 pm. “On Dec. 31, only 50 percent attendance will be allowed at hotels and clubs for New Year eve parties and cases will be booked under the provisions of National Disaster Management Act. There will be no DJs, cultural programmes and large gatherings,” City Top Cop added.

Even private party venues will be under watch and large gatherings, loud music and other activities will not be allowed at private gatherings and farm houses. There will be no restrictions on online food delivery and there will be no gathering of groups on roads, circles and junctions on Dec. 31. People have been barred from going around in vehicles and wishing New Year and consuming alcohol in vehicles by the side of the road.

“Barricades will be laid and entry will be restricted across the city and residential pockets and there will be intensive patrolling. All the resources and vehicles will be out to use to ensure full compliance of the rules,” he added.

Order to be maintained

Deputy Commissioner of Police (Law and Order) Pradeep Gunti said that the Government order is pretty clear and there is no reason for ambiguity. “We will be in full force at Police Stations, Control Rooms and also on the streets to implement rules. I request people to spend a quiet new year with their family and friends instead of gathering at public places,” he said. Teams have been assigned on patrol duties and to make announcements and there will be no activity at malls from tomorrow till Jan. 7, beyond 10 pm.

Superintendent of Police (SP)  R. Chethan said that city outskirts, resorts, water points and picnic spots will be under watch and patrolling teams have been constituted to strictly enforce rules.

“This apart, the Government order says that all gatherings, meetings, conferences including marriages from Dec. 28 should strictly limit the number of participants to 300 people only. We will ensure that this rule is followed at community halls, marriage halls and other places,” the SP added.