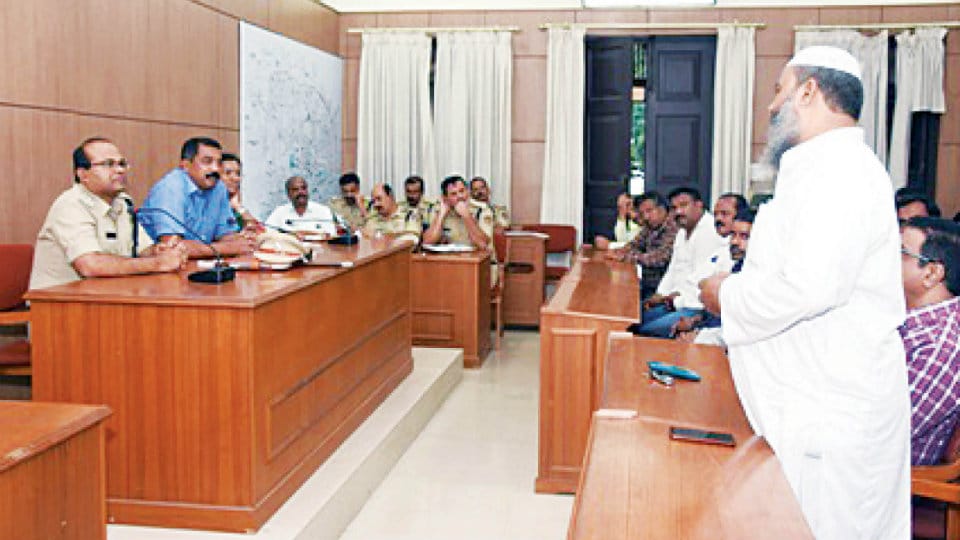 Even as Tipu fans staged a demonstration, the City Police held a peace meeting ahead of Eid-Milad  and the much-awaited Supreme Court verdict on Ayodhya dispute, that is expected to come in a few days.

During the meeting at the Police Commissioner’s Office here yesterday, the Police asked the people to celebrate Eid-Milad festival in a peaceful manner and not to take to the streets, whatever be the outcome of the SC verdict on Ayodhya. Instructing the people not to pay heed to any rumours or speculations that may appear on social media networks, the Police warned against making any provocative statements that may disturb peace and harmony in society.

Directing the people to strictly follow the Police instructions on these issues, the Police asked the public to inform the nearest Police Station or call the Police Control Room – 100 or Ph: 0821-2418339, if any trouble on the law and order front arises.

The Muslim community leaders who attended the meeting, assured that they would follow Police instructions and co-operate with cops in maintaining law and order. They also assured that the Police will be informed immediately if any attempts are made to disturb peace and harmony.