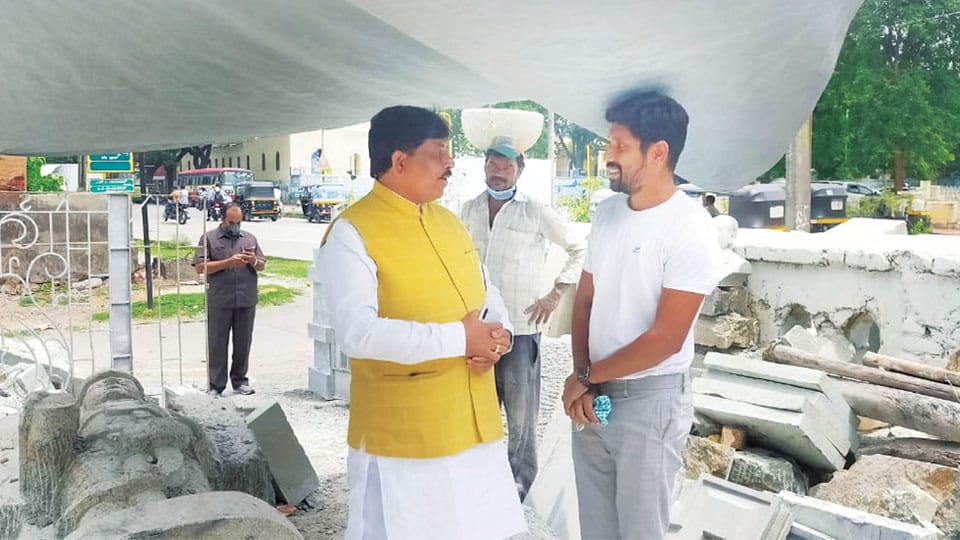 Mysore/Mysuru: In recognition of his sculptural works, the Industries Department has sanctioned two acres of land in Kadakola Industrial Area to noted city-based Sculptor Arun Yogiraj.

More recently, he sculpted the statue of Sri Shankaracharya installed at Kedarnath, which caught the attention of Prime Minister Modi. Deeply impressed with Yogiraj’s work, PM Modi has entrusted the responsibility of sculpting the statue of Netaji Subhas Chandra Bose, for installation near Delhi’s India Gate.

Arun Yogiraj, who is currently working from a small space in front of his house located near Basaveshwara Circle where Chamaraja Double road meets New Sayyaji Rao road, is facing severe space crunch.

Finding it extremely difficult to carry out his sculpture works, Arun Yogiraj had applied to the Government a couple of years ago seeking land in an industrial estate. But as he did not get any response from the Industries Department, he brought the matter to the notice of Industries Minister Murugesh Nirani, who acted swiftly and ordered sanction of two acres of land in Kadakola industrial area.

Speaking to Star of Mysore in this regard, Arun Yogiraj said that he got national recognition after the sculpture of Sri Shankaracharya, which drew special attention of the Prime Minister.

“PM Modi was so impressed with my Sri Shankaracharya sculpture installed at Kedarnath, that he entrusted the responsibility of sculpting Netaji Subhas Chandra Bose statue to me. We have to adopt the latest technologies to bring out the best in our works and as such, more space is required for timely and  perfect execution of orders,” the sculptor said.

“Due to space crunch, I had applied for land in an Industrial Layout about three years ago. But I did not get any favourable response. I brought the matter to the notice of Industries Minister Murugesh Nirani when he came to my house during his visit to Mysuru a month ago. The Minister complimented my works and assured me of sanction of land, which has now been realised with the KIADB allotting 2 acres of land in Kadakola Industrial area along Nanjangud Road,” he said adding that he got to know of land sanction just a couple of days ago.