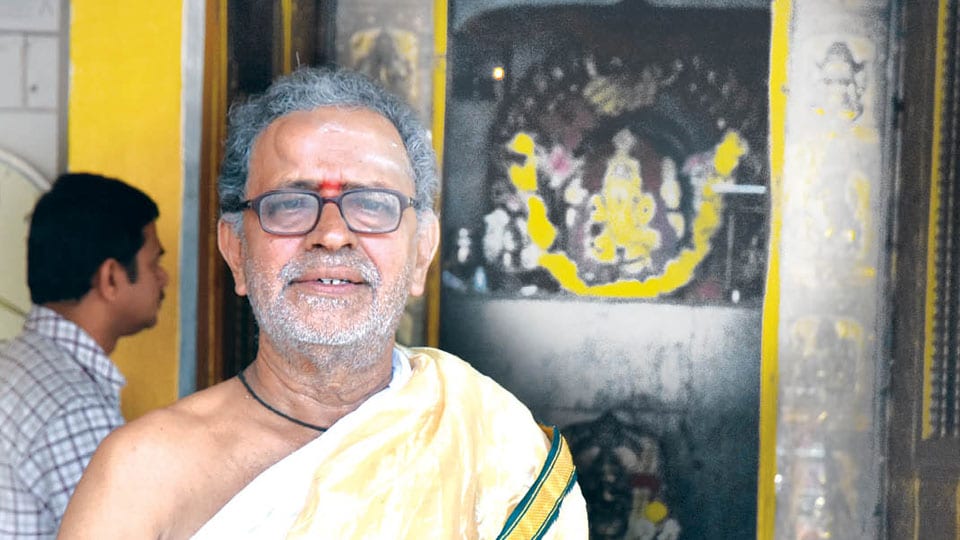 Thespian Dr. Rajkumar once described P.B. Sreenivas (PBS) as his shaareera (voice) while he himself was a mere shareera (body), summing up how some of the best-known films of the matinee idol are unthinkable without the legendary singer lending his voice. PBS ruled the Kannada film industry for over two decades as a playback singer and was the voice of many stars, including Rajkumar, Uday Kumar and Kalyan Kumar.

PBS will always be remembered for crooning thousands of melodies in Kannada and other South Indian languages. Though he is not with us today, he still lives on in the hearts of his fans through his music.

Sixty-nine-year-old Mysurean, Sambamurthy, is an ardent fan of PBS but he is not just one among thousands of fans of the popular singer. Sambamurthy has been imitating and humming the legendary singer’s one-of-a-kind voice since his childhood and now everybody calls him as Junior PBS.

Born in Arkalgud taluk of Hassan, Sambamurthy is the fourth child of Sitaramaiah and Lakshminarasamma couple. During his childhood, Sambamurthy could not receive a formal education in classical music, but his mother was his inspiration as she used to sing devotional and folk songs during his childhood years. Hailing from a poor family of priests, devotional songs that his mother used to sing during religious and festival gatherings encaptivated the young boy and left an indelible impression on him. On the other hand, his father was of the opinion that music would never provide a decent livelihood and hence young Sambamurthy could not get any support to pursue his dreams of becoming a musician.

In 1965-66, when Sambamurthy came to Mysuru for studies, he stayed at Thathaiah Anathalaya on Narayana Shastri Road. Later, when his father also gets a job in Kote Ganapathi Temple of Mysore Palace as priest, young Sambamurthy studying PU in D. Banumaiah College had to help his father along with his studies, but he never drifted away from his dream of becoming a singer.

Even while doing B.Com in an evening college in Mysuru and helping his father as a priest, in his spare time, young Sambamurthy continued to sing on stage during any cultural event that was being held in Mysuru.

Sambamurthy did continue his favourite hobby of singing even while working as a clerk in Geeta Book House, later in Mysore State Road Transport Corporation in Hubballi (1976-78) and then as a clerk in Mysore Cooperative Bank (1978-2010).

Even after his retirement, Sambamurthy is still enjoying his favourite hobby of singing, in particular impersonating the melodious voice of PBS. Living with his wife Annapurna and daughter Vidyasri, Sambamurthy is now serving in Kote Ganapathi Temple in Palace premises as a priest while chasing his dream of setting tune to Sanskrit shlokas and learning classical music.

‘I rendered a song when PBS was on stage’

After his retirement, President of Chutuku Sahitya Parishat Dr. MGR Urs did provide the much-needed opportunity and encouragement for singer Sambamurthy. He fondly remembers singing at a programme, ‘PBS Gaanaabhinandane’ where legendary singer P.B. Sreenivas himself was on the stage (see pic. below) in Press Club premises, Bengaluru, on February 24, 2013. On that memorable day, as Sambamurthy remembers, PBS appreciated him after listening to him rendering the song, ‘Thale baagi banni vaturupi ganapanige.’

Sambamurthy also gratefully remembers famous music directors of yesteryear Rajan-Nagendra who urged his father Sitaramaiah to send him with them by saying ‘he has all the necessary talent to become a singer.’

Sambamurthy has been conferred with ‘Yoga Dasara Kesari Award’ by Himalaya Foundation and Mysuru Yoga Association in 2019. Recipient of numerous awards, Sambamurthy has been felicitated by Dasara Cultural Sub-Committee in 2011 as well as during ‘Saadhakarondige Samvaada’ programme organised by Mysore Art Gallery.