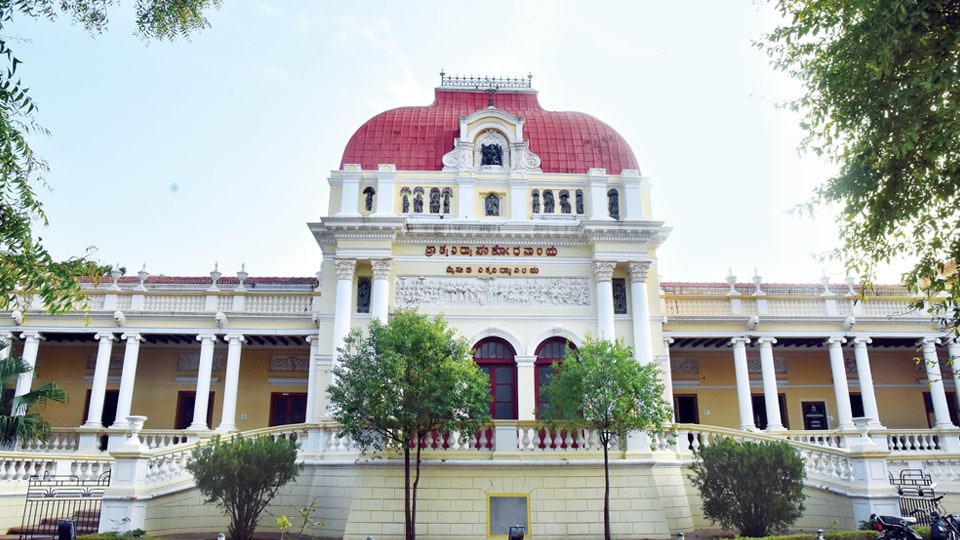 Digitalisation of the oldest extant copy of Kautilya’s Arthashastra and other manuscripts will be a reality soon at the more-than-a-century-old Oriental Research Institute (ORI) in Mysuru. The institute has taken steps to digitise its vast collection of nearly 70,000 palm leaf and paper manuscripts in Sanskrit and Kannada.

Kautilya’s Arthashastra was discovered by scholar R. Shama Sastri, a well-known Scholar and Librarian of ORI, who published it in 1909. It is a palm leaf work on Indian polity, economics, military science, business management, administration, civil law and governance. Gemmology and metallurgy are some interesting parts in it. Training of elephants and horses for warfare is also depicted here. Taxation policy is described very clearly. The ‘Grantha’ script is still considered an invaluable document for political science students, research scholars and the general public.

The Fourth Century (340-250 BCE during Chandragupta Maurya’s reign) script has 168 palm leaves and ORI has taken special initiatives to clean and maintain the script so that it does not get lost in time.

“Decades ago, the script was cleaned along with other scripts. But the process was stopped midway. Now we have restarted the process and will soon digitalise them so that it can be available to a larger audience at the click of the mouse. The University of Mysore has sanctioned special funds for this,” ORI Director Prof. S. Shivarajappa told Star of Mysore.

A treasure-trove of etchings on palm leaves

The Oriental Research Institute (ORI) is a repository of 37,000 bundles of palm leaf manuscripts and the exact number may exceed 70,000, enshrining the ancient Indian knowledge system spanning different disciplines. Formerly known as Oriental Library or the Government Oriental Library, the ORI’s main objectives were to collect, exhibit and publish rare manuscripts. Its roots can be traced back to the time of Chamarajendra Wadiyar X.  The ORI building was built in 1887 to commemorate the golden jubilee of Queen Victoria’s ascension to the British throne. Subsequently, the Oriental Library was started in 1891. It was rechristened Oriental Research Institute in 1946.

The ORI was initially used as a storage space to showcase the manuscripts in government’s possession. These manuscripts that are written in Kannada and Sanskrit were collected at the time of surveys conducted under British historian, archaeologist and educationist B.L. Rice. Dewan of Mysore K. Sheshadri Iyer had expressed keen interest in preserving and preparing a catalogue of these manuscripts in a scientific manner and R. Shama Sastri was chosen to head the project.

Rice was an archaeologist of repute and it was during his tenure, over 9,000 inscriptions in 12 volumes of ‘Epigraphia Carnatica’ were published.

Apart from Kautilya’s Arthashastra, the institute has a rare collection that comprises works such as ‘Sritattvanidhi’, ‘Manasollasa’, and ‘Amruthakathaka’. Besides, it has the ‘Encyclopaedia of Religion and Ethics’ by James Hastings, a ‘Vedic Concordance’ by Maurice Bloomfield, and critical editions of the Ramayana and Mahabharata.

The ORI has in its possession the smallest and longest manuscripts. The smallest is the size of a matchbox on which the shlokas of ‘Srimad Bhavagad Geeta’ is written. The longest one is Viramahesvarachara Sangraha written by Nilakantha Nagamathacharya that throws light on traditions of Veerashaivism. It has shlokas in Sanskrit along with translations in Halegannada. It is said to have been written in the 12th or 13th century.

Agreement with National Mission for Manuscripts

The ORI carries out the due process to save priceless pieces from being spoilt by the march of time. The institute, departing from its conventional method of preserving manuscripts, now captures the scripts on microfilm which necessitates the use of a microfilm reader for both viewing and studying. Digitisation of manuscripts will be an additional step to save the scripts.

The institute uses fumigation technology to clean the manuscripts. “All scripts are cleaned and re-tied and are preserved with neem leaves. New Delhi-based National Mission for Manuscripts (NMM) has come forward to assist us in preserving the manuscripts and all correspondence has been completed. We are waiting for the final order and NMM will provide additional resources and technology to preserve these rare pieces of history and knowledge,” said ORI Director Prof. Shivarajappa.

After the digitisation process is complete, it would enable Indologists and scholars in different parts of the world to access the database. It will give a boost to research and will be a valuable document to understand of Indian history, art, culture, and heritage, he explains.

“Earlier, scholars had to personally visit the ORI or communicate with us study manuscript. This was time-consuming. Digitisation enables easy access of the documents and scripts from any of the part of the world and at any time. It will save a lot of time, energy and money,” he added.

The world’s longest palm-leaf manuscript Viramahesvarachara Sangraha written by Nilakantha Nagamathacharya too will be digitised. The manuscript measures 2.95 feet and is 300 years old. It is a bundle of 180 palm leaves, each measuring 90 cm or 2.95 ft and about 4 to 5 centimetres in width.

Viramahesvarachara Sangraha is a scholarly work espousing the Veerashaiva philosophy and the full manuscript could run into nearly 300 chapters. The ORI has preserved it in a specially designed wooden case. “A special scanner will be procured from China to scan and document the manuscript. This will help in the digitisation process. We are corresponding with Chinese firms to supply the scanner,” said ORI officials.

At a programme held in ORI in January this year, Mysuru-Kodagu MP Pratap Simha took along P.R. Mukund, the founder of Bengaluru-based Tara Prakashana to look into the ways and means to conserve the rare manuscripts. Tara Prakashana is a pioneer in e-publishing had digitised over 3,000 palm scripts pertaining to ancient medicine.

Tara Prakashana uses “Waferfiche” technology to digitise palm leaf manuscripts and books. This technology that will preserve the text for at least 500 years requires no care and is fire-and water-resistant.

Waferfiche technology is used as the medium for archival of the manuscripts. It is a patented technology developed by NanoArk Corporation, USA that is a replacement for microfilm and microfiche. Waferfiche has a very hardy substrate developed using semiconductor manufacturing technology that is capable of withstanding humidity, water, and temperatures over 5,000 Degrees Celsius, thereby being an excellent medium for archiving data and disaster recovery for very long periods of time.

“In this, we use semiconductor technology to emboss the images in metal on Silicon wafers. This will last for a many hundreds of years, and is water and fire proof,” says Mukund.