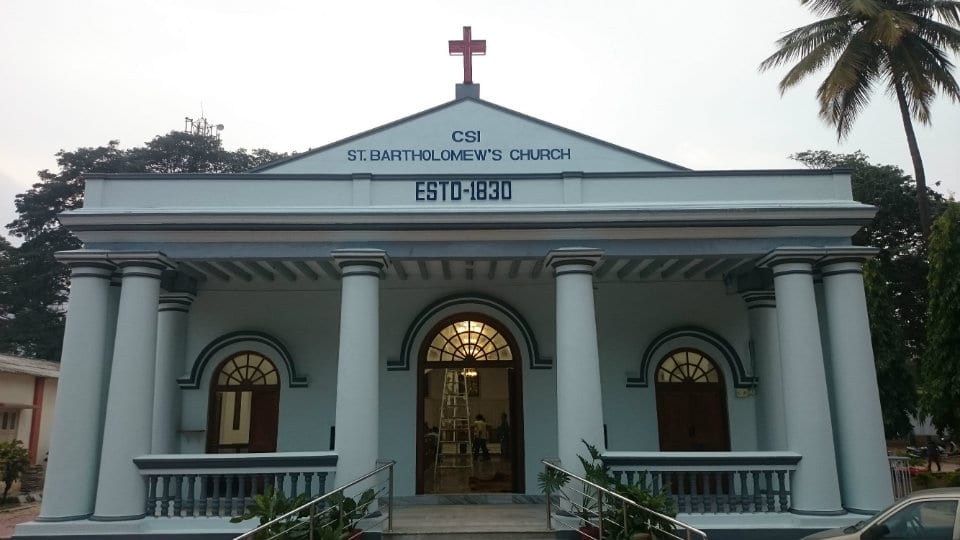 St. Bartholomew’s Church, city’s oldest Church was today re-dedicated after being renovated. The Church was re-dedicated this morning by Rev. Sr. Sujatha, Vice-President of Church of South India- Karnataka Southern Diocese (CSI-KSD) in the presence of previous Presbyters of the Church, Minority Department Director Puttaraju, Corporator Shivanna, members of the Church and dignitaries.

Earlier, the members and dignitaries, who assembled in front of the Church, took out a procession round the Church following which a special service was held in the renovated Church

Rev. Gilbert, Presbyter of St. Bartholomew’s Church, speaking to Star of Mysore said that the Church was renovated through the fund from the Minority Department and contributions from the members of the Church. 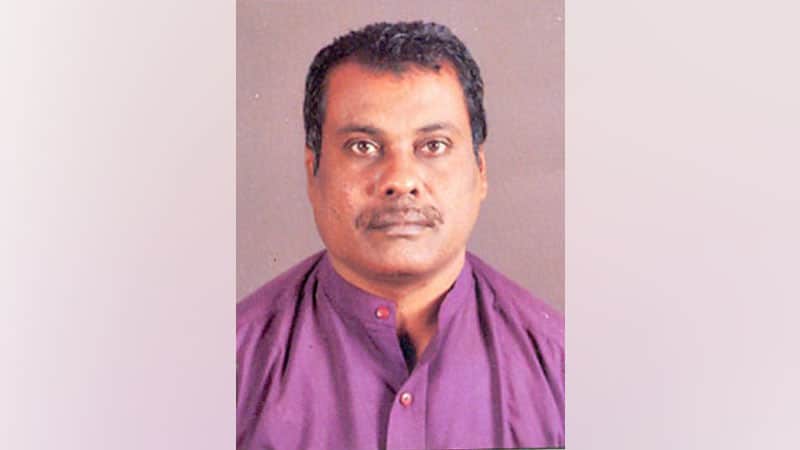 Speaking about the renovation, Rev. Gilbert said that false roofing, construction of the compound, flooring using granite slabs, complete electrification and painting has been undertaken and added that a LCD Projector with screen has been installed and the sound system has been upgraded using the fund.

Rev. Gilbert said that St. Bartholomew’s Church stands as an exemplary example of the cultural harmony fabricated into the social life of Mysore since ancient times. Built in 1830 during the early colonial era in India, the Church holds the distinction of being the oldest Church of Mysuru, he said and added that the Church was built in memory of Saint Bartholomew, one of the twelve Apostles of Jesus Christ.

History of the Church

After the Tipu Sultan-era ended, the erstwhile Mysore State was a witness to a large number of Europeans migrating and settling down in the city. As the city experienced the growth of Christian population, it also faced the demand to fulfil the religious need of these people. The then King of Mysore, Krishnaraja Wadiyar III, offered the land to build a Church for the Christian community living in his kingdom.

The Church was consecrated in 1830 and was constructed in 1832.  In 1847, the church was affiliated to the Anglican denomination and handed over to the Madras Government in 1852.

Incidentally, when the Church was constructed it was located on what was then known as the ‘outskirts’ of Mysuru. Since then, Mysuru has outgrown the ramparts of the fort that surrounded the Palace, and today, the Church lies in the heart of the city.

As the Church started conducting services in an era when no English Medium School existed in either Mysuru or Bengaluru, the Church also served the purpose of schooling the children of European officers who served in Mysuru during that period. In 1874, the Church initiated

Sunday School to impart good Christian education to the children, which continues till date. 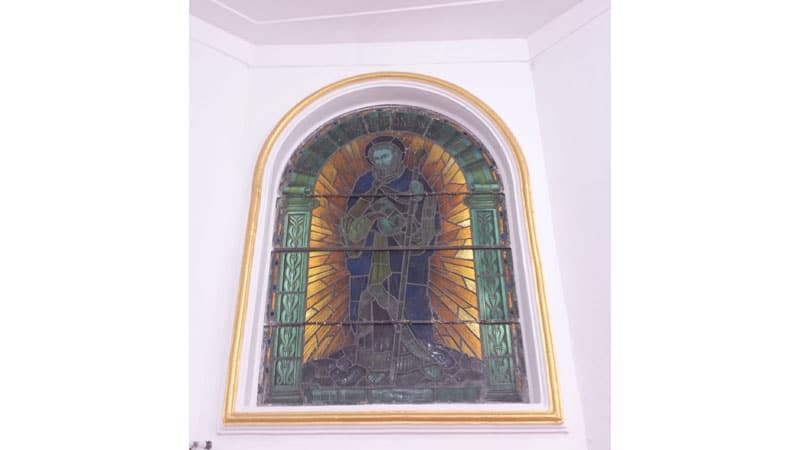 St. Bartholomew’s Church is a single storey structure built in a simple but attractive style. Though much is not known about the architect of the Church, the beautiful structure is a glaring reflection of the wonderful workmanship of the architect.

Standing in a serene location, the Church can easily pass off as a large bungalow. But once inside, the Church draws attention with its lovely stained glass windows and tall pillars. The large glass windows of the Church and the high dome at the end portion of the church echoes the wonderful architectural style followed in that bygone era.

A significant monument for visiting dignitaries

St. Bartholomew’s Church has always attracted visiting dignitaries of Mysuru. Way back in 1834, the then Governor General of India, Lord William Bentinck visited this Church. In the early part of 1906, King George V paid a visit to Mysore and had offered prayers in this historic church. The Prince of Wales, Edward VIII visited  the Church in the year 1921 when he came to Mysuru. In 1930, the then King of Mysuru Krishnaraja Wadiyar IV donated a beautiful stained glass to the Church which was unveiled by Lady Wellington. 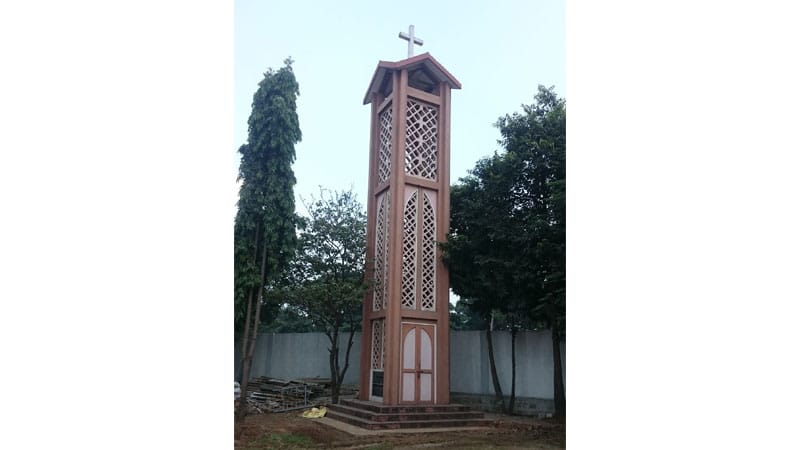 One of the most interesting things about St. Bartholomew’s Church is that the Church Bell (still in service). It was at the French Army Base Church at French Rocks Erode village (now Pandavapura), some 25km from Mysuru. This Church Bell was cast in France during the middle of 17th century and was at the service of the French Army Base Church till the Church was dismantled to make way for the Visvesvaraya Canal. After the Church was taken apart, its functional bell was gifted to St. Bartholomew’s Church which is now installed in the Bell Tower and the bell rings during service every Sunday.

One more interesting fact is that the city’s oldest Church has the fully functional 129-year-old Pipe Organ which was custom built in the year 1888 by William Hill and Sons in London.

The Pipe Organ which was custom-built in 1888 at London, for a small English parish at St. Barnabas, Sutton in UK, made its way to the CSI Holy Trinity Church in Bellary in the year 1912. In 1968, Bob Granner, an organist at Kodaikanal International School (KIS) in Tamil Nadu, got the instrument set up at The Margaret Eddy Memorial Chapel in Kodaikanal by an Organ technician from Chennai. 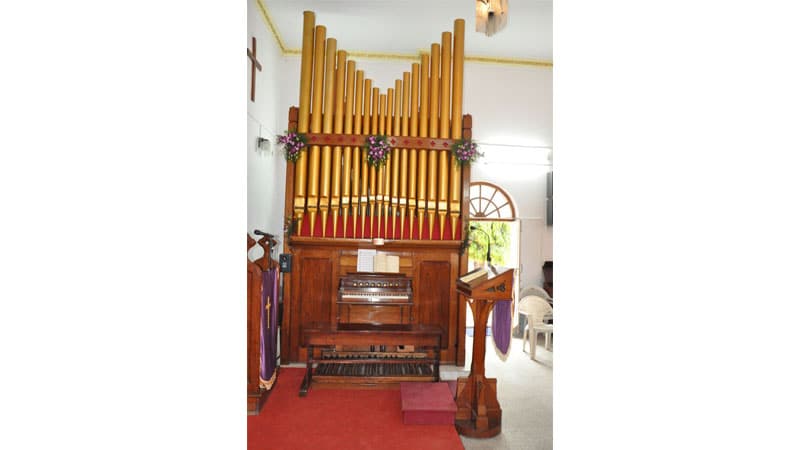 Its mission still continues at St. Bartholomew’s Church by creating wonderful reverberating music during worship services even after 127 years of its life, says Anand.