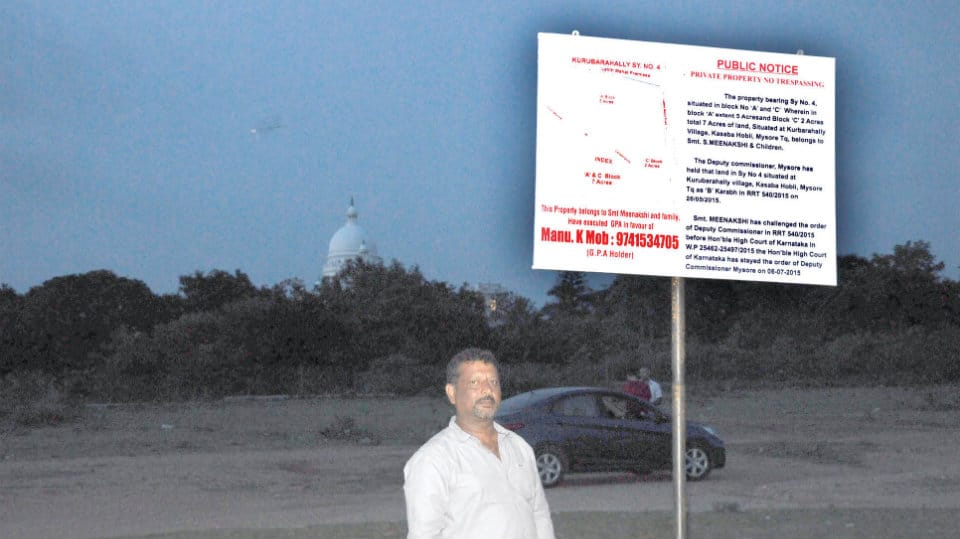 Claiming Court stay, use of land near Lalitha Mahal Palace for Dasara events is objected

Mysuru: Even as the countdown for Dasara festivities has begun, a woman claiming to be the owner of land adjacent to Lalitha Mahal in  city, has opposed the move of the District Authorities to organise Dasara programmes on this vacant land and has even erected a notice board at the plot (see pic).

One S. Meenakshi, who claims to be the owner of the land, has maintained that 5 acres of land in ‘A’ Block and 2 acres of land in ‘C’ block (totalling 7 acres) coming under Kurubarahalli Sy. No. 4 belongs to her.

Earlier, GPA holder K. Manu, on Sept. 14, had submitted a memorandum to DC Abhiram G. Sankar appealing him not to allow use of the said land for Dasara events.

“As part of Dasara festivities, the Tourism Department, in association with Pavan Hans Limited, has planned to organise helicopter jolly rides from this land. The Department is also planning to hold a moto cross race / rally at the land adjacent to this which also belongs to their (Meenakshi) family. The Automotive Sports Club of Mysuru, which has publicised organising the rally on a permanent basis, is planning to construct permanent structures at the land. But the then DC in 2015 had passed an order declaring a total of 1,563 acres of 31 guntas of land coming under Kurubarahalli Sy. No. 4 as ‘B-Kharab’ land. Later, her family moved the High Court, which granted a stay to the DC’s order on July 6, 2015. As such, it is not correct to use the said land for Government programmes. As the said land comes under the purview of the High Court stay order, the Government must not organise any Dasara events on this land. Also, other Government and private organisations too should not be allowed to use this land for any programmes,” said the memorandum submitted to the Deputy Commissioner by GPA holder Manu on behalf of Meenakshi’s family.