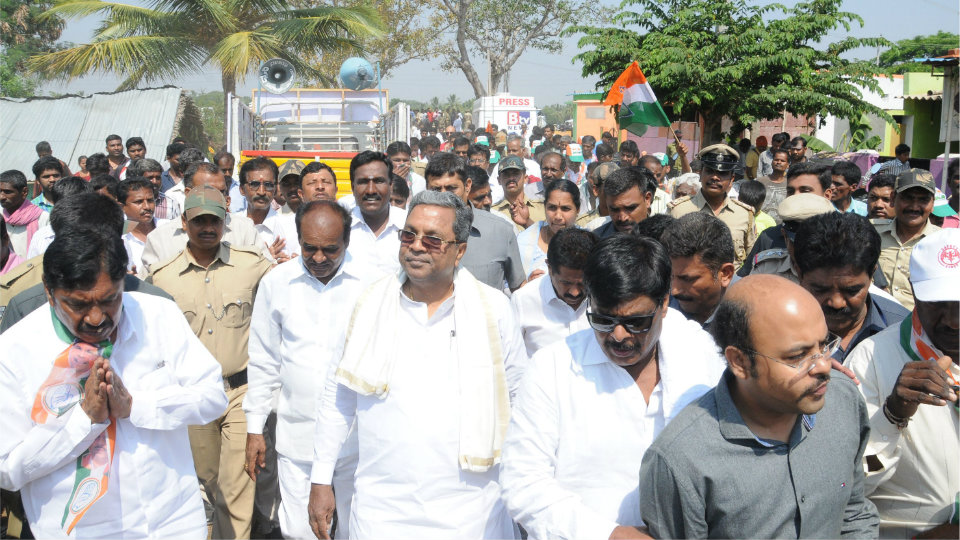 Villagers of Nanjangud and Congress workers gave a rousing welcome to the CM as his specially modified campaign vehicle traversed through the main roads of Nanjangud town and the narrow roads of surrounding villages. They showered flower petals and burst crackers as the convoy moved.

Election to the Nanjangud constituency will be held on April 9 along with Gundlupet constituency. Nanjangud is witnessing a high-voltage battle between Congress (Kalale Keshavamurthy) and BJP candidate (V. Sreenivasa Prasad). CM Siddharamaiah has taken the by-election as a prestige issue as it is a key indicator for the 2018 general elections.

The CM later got on to a modified goods vehicle that was specially designed for the road show. The vehicle was surrounded by Congress flags and had the banners of ballot papers that had the photo of Kalale Keshavamurthy and the party symbol next to it. 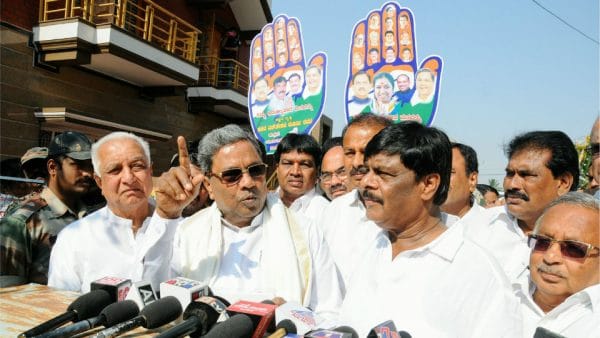 Proceeding from Nanjangud, the vehicle reached Goluru where villagers burst crackers and showered flower petals at the CM. Some party workers climbed trees and buildings to shower flowers. They shouted pro-Congress slogans that rent the air. In his public addresses – at places he got down from the vehicle and addressed villagers standing under the shades of peepal trees – Siddharamaiah was convincing voters to vote for Congress.

The Chief Minister’s road show resulted in traffic jams in and around Nanjangud town. Caught in the jam was BJP State President and former CM B.S. Yeddyurappa who was heading to Chamarajanagar in a seven-vehicle convoy along with Nanjangud BJP candidate and former Minister V. Sreenivasa Prasad. As CM’s road show reached Badanavalu and was proceeding towards Mahadevapura, Yeddyurappa’s convoy too reached the same place, causing a traffic jam. Yeddyurappa had to wait for over 15 minutes for the road show crowd to pass. Yeddyurappa’s Man Friday Kapu Siddalingaswamy got out of the vehicle and was seen requesting Congress workers to clear vehicles to make way for “sahebru”.

SCHOOL CHILDREN RUSH OUT OF CLASSES

When the Chief Minister’s road show entered Chinnadagudi village hundreds of school children rushed out of a school to see the political leaders. They came out of classrooms and shouted slogans praising CM Siddharamaiah. Teachers had a tough time in controlling the children and they were seen pleading with them to return to the classrooms. Seeing this, a few villagers told the teachers to allow the children watch the campaigning leaders.

A group of 15 youths were hauled up by the Police today for shouting anti-Siddharamaiah slogans. As Siddharamaiah’s convoy returned from Badanavalu and neared Badanavalu Gate, a group of youths shouted slogans against CM Siddharamaiah. The Police who swung into action dispersed the crowd and allowed the rally to move ahead.