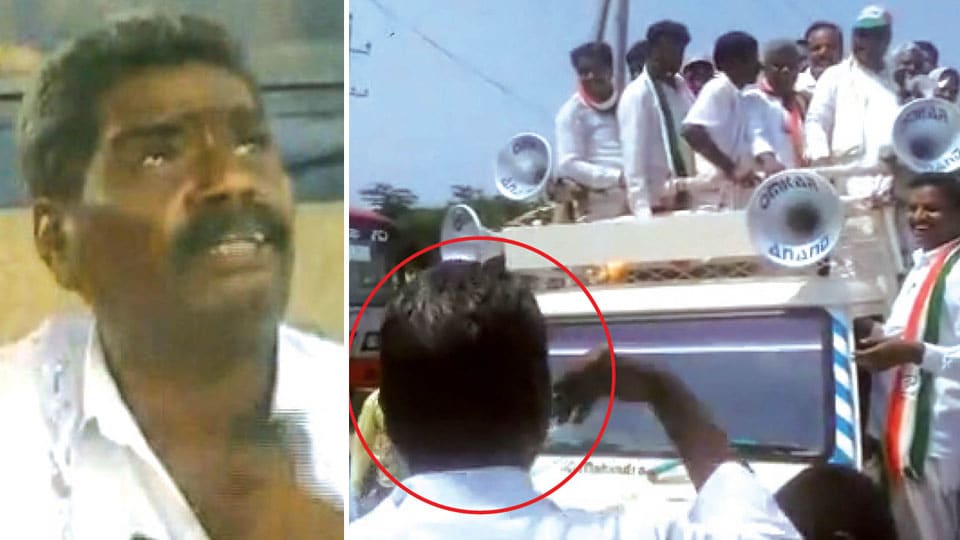 Mysuru: On his campaign trail in Chamundeshwari Constituency where Chief Minister Siddharamaiah is fighting a high-profile electoral battle with incumbent MLA G.T. Devegowda, the CM yesterday had to face some embarrassing moments.

During a road show in Chamundeshwari, Gram Panchayat (GP) Member Mariswamy, the CM’s friend of 15 years, openly turned down an invite to join him (CM). Mariswamy said he would support the JD(S) that has promised the Deputy Chief Minister’s post to a Dalit if it came to power.

The incident occurred at Hale Kesare coming under Chamundeshwari Assembly segment where the CM recognised some of his old friends Veerabhadra and GP Member Rajanna and spoke to them.

Standing on an open jeep, Siddharamaiah identified Dalit leader Mariswamy, who is a Member of Siddalingapura GP.

The CM called out Mariswamy, who was standing with a bunch of people at a distance and watching the road show, and asked him to vote for Congress.

“Mariswamy, will you vote for me,” the CM asked. To this, Mariswamy replied, “I will not support you. I am in the JD(S).”

“Don’t forget you were with me earlier,” the CM said. Siddharamaiah tried to convince Mariswamy and said, “JD(S) and BJP are two sides of the same coin. Be with JD(S), but vote for me.” However, Mariswamy was adamant. He said, “Whatever the JD(S) might be. I will neither vote for you nor will I come with you.”

The CM even asked Mariswamy if he remembered he used to visit the latter’s house. When Siddharamaiah told Mariswamy, “Okay go, don’t come with me,” Mariswamy replied, “It is my village and you are in my place. You have to leave the place and not me. It is you who have left JD(S). Not me.”

Mariswamy continued, saying, “A big salute to the one who made you the Deputy Chief Minister in the past,” indirectly referring to JD(S) Supremo H.D. Deve Gowda. To this, Siddharamaiah replied, “That was then. Now, I am the Chief Minister.”

The CM indicated that working for the JD(S) was akin to helping the BJP which, he said, had leaders like Union Minister Anant Kumar Hegde, who were openly advocating changing the Constitution and destroying statues of B.R. Ambedkar. But Mariswamy refused to buy the CM’s argument, saying he will work and vote for JD(S) candidate G.T. Devegowda.

As Mariswamy turned to go, JD(S) workers shouted slogans in favour of the party and its candidate against Siddharamaiah in Chamundeshwari, G.T. Devegowda.

The workers also asked the Chief Minister to leave the place.