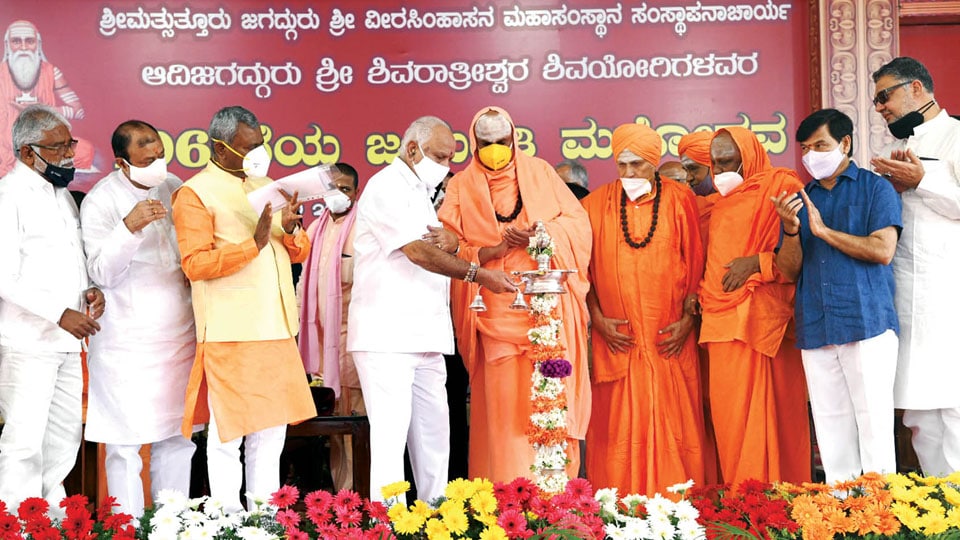 Mysore/Mysuru: Hours after the BJP High Command gave a green signal for Cabinet expansion, Chief Minister B.S. Yediyurappa (BSY) said that the much-anticipated expansion would take place either on Jan. 13 or 14.

BSY, who returned from New Delhi to Bengaluru late last night after meeting the BJP top brass on Sunday, during which he reportedly got the nod for Cabinet expansion, arrived at Suttur Srikshetra in Nanjangud taluk by helicopter this morning to take part in the 1061st Jayanti celebrations of  Adi Jagadguru Sri Shivarathreeshwara   Shivayogi Mahaswamiji.

Speaking to press persons at Suttur helipad, BSY, who arrived from Bengaluru at 9.20 am, said as ‘Amavasya’ (New Moon) on Jan. 13 is to end at 4 pm, the Cabinet expansion will take place after 4 pm or on the following day (Jan.14) which happens to be Sankranti festival day.

Asserting that the swearing-in of new Ministers will take place once the BJP National President J.P. Nadda gives the go ahead, Yediyurappa, replying to a query, said that whether it is a Cabinet expansion or a reshuffle will remain a suspense and would be made known only either on the evening of Jan. 13 or on Jan.14.

When asked about the probable Ministers, Yediyurappa asked presspersons to wait till the announcement, which is likely to happen later today or tomorrow.

Referring to Opposition leader and former CM Siddharamaiah’s assertion that Yediyurappa would soon  be replaced as the CM, he sarcastically asked Siddharamaiah to announce  the date on which he (BSY) would be replaced.

Later, Yediyurappa took part in the 1061st birth anniversary of Adi Jagadguru at Suttur Gaddige, where he released Suttur Mutt Panchanga (calendar) and several books published by the Mutt.

Addressing the gathering, Yediyurappa said that Suttur Veerasimhasana Gadduge  is continuing  the  rich legacy left behind by great saints and philosophers by carrying out spiritual, religious and educational activities on a massive scale.

Observing that the Suttur Mutt has been doing what the Government should have done for promotion of educational, spiritual, cultural and such other activities, he lauded the Mutt for conserving the rich heritage, customs and practices  while also maintaining an inseparable bond with the society.

Highlighting  that Suttur Mutt extended full  support to  the Government during critical times such as the North Karnataka floods in 2009 and the current COVID-19 crisis, the CM said that the Government will always be with the Mutt in all its activities aimed at welfare and well-being of the society, which the Mutt has always been working for.

Suttur Mutt Seer Sri Shivarathri Deshikendra Swamiji and a host of other Swamijis of different Mutts graced the occasion.

The Jayanti Mahotsava was organised in a simple manner on account of COVID-19 pandemic.

Thereafter, the CM left by road to Chamundi Hill where he sought the lessings of Goddess Chamundeshwari at the Hill temple.

After seeking blessings of Goddess Chamundeshwari, the CM visited Kalamandira on Hunsur Road where he inaugurated the Jan Sevak Convention organised by the State BJP Unit. The CM also offered puja    to Nandi Dhwaja at the Kalamandira premises.