Home » News » Coalition Government under threat as Jarkiholis up pressure 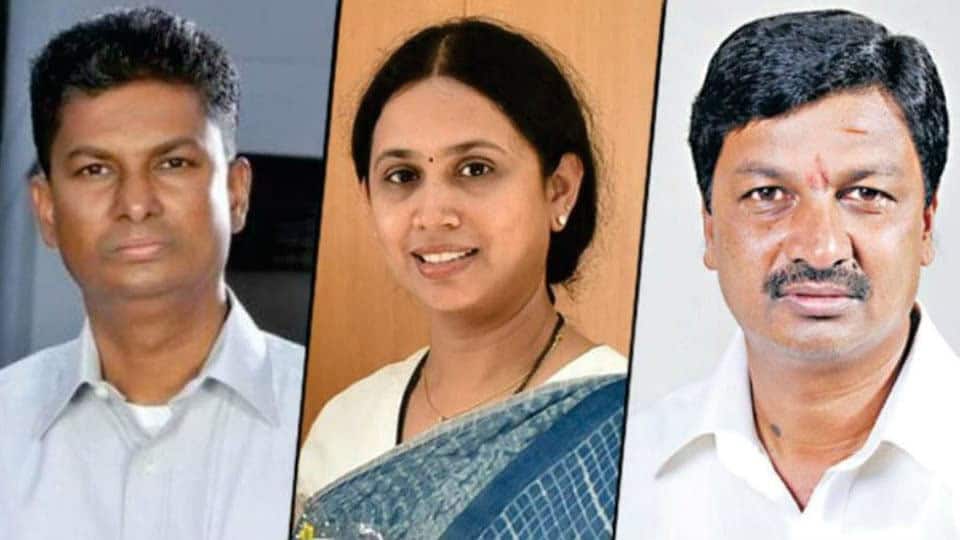 Coalition Government under threat as Jarkiholis up pressure

Bengaluru: In a fresh trouble for the Congress, the Jarkiholi brothers of Belagavi have threatened to mock the JD(S)-Congress Coalition Government if the party failed to meet their demands, which include keeping Minister D.K. Shivakumar from interfering in the politics of their Belagavi fiefdom.

Ramesh and Satish Jarkiholi, who have accused Shivakumar of interfering in their backyard, through MLA Lakshmi Hebbalkar, are said to have bluntly asked the Congress High Command on Tuesday to rein in the Minister or face the consequences.

The Jarkiholis gave the Congress High Command time till Sept.16 to intervene and settle the power tussle. The Jarkiholi brothers are also said to have demanded making Satish Jarkiholi the State Party President.

Amidst all these developments, Satish Jarkiholi said that anything can happen in the next fortnight. Pointing out that the party leaders have been urged to resolve certain issues raised by them, Satish said he hoped the Congress High Command will take up the issues seriously and resolve them at the earliest. The Jarkiholis, who hold sway in Belagavi, have publicly complained over recent developments in the district. They had locked horns with party MLA Lakshmi Hebbalkar, who represents Belagavi rural, over the elections to the Primary Land Development (PLD) Bank there in which her group emerged victorious. While the Jarkiholi brothers — both congress MLAs with one a Minister — continued to talk tough with veiled threats of taking serious decisions on Sept.16 after ex-CM Siddharamaiah’s return from Europe tour, hectic activities began in the BJP camp on Tuesday.

READ ALSO  D.K. Shivakumar to patch up with Jarkiholi brothers

A sudden meeting of senior BJP leaders at State BJP President B.S. Yeddyurappa’s (BSY) residence in the State capital, lent credence to speculations of major developments in the State politics over the next few days. Yeddyurappa called Jagadish Shettar, Govind Karjol, Umesh Katti and Shobha Karandlaje to his residence at Dollar’s Colony and discussed the developments in Congress. Yeddyurappa reportedly advised the party leaders to keep away from the developments and wait for an opportune time to make the next move.

BSY is also said to have asked the BJP MLAs not to travel abroad, given the fluid political situation in the State. With 104 seats, the BJP can form the Government if a minimum of 15 MLAs from the ruling Coalition Government resign and bring down the Assembly strength to 207.

As political discontent within the Congress keeps the ruling coalition on tenterhooks, the BJP Central leadership is reportedly against its State unit fishing in troubled waters.

It is said that the hasty decision of BSY to try and form a government with only 104 MLAs, post the May 2018 Assembly polls had caused a major embarrassment to the BJP’s national image. However, BSY is making efforts to approach the ruling coalition MLAs within a tight circle of his confidants, it is learnt. Amidst all these speculations, there are also rumours that the Jarkiholis and State BJP President have together been working out a plan to topple the coalition Government.

Even as the raging controversy involving Jarkiholi brothers and Belagavi Congress MLA Lakshmi Hebbalkar is causing worry to the Kumaraswamy led JD(S)-Congress coalition Government, JD(S) Supremo and former PM H.D. Deve Gowda has reportedly stepped in to save the Govt. from collapsing.

Deve Gowda, who is maintaining close contact with the Congress High Command, is also said to be in touch with some Central BJP leaders in order to neutralise the State BJP’s plans of mobilising support for forming the Government in case the coalition Government collapses. Deve Gowda is said to have gathered some documents on the efforts of BJP leaders to topple the Government and take up the issue at the national level, which can pose an embarrassment for the BJP leadership. However, the JD(S) Supremo made it clear that it will not react to the speculation that the BJP is trying to destabilise the Govt. Speaking to press persons at Holenarasipur on Tuesday, Deve Gowda said that the issue was created by the media. Pointing out that he will not blame anyone for this speculations, he said that he does not want to reply to everyone’s statements.