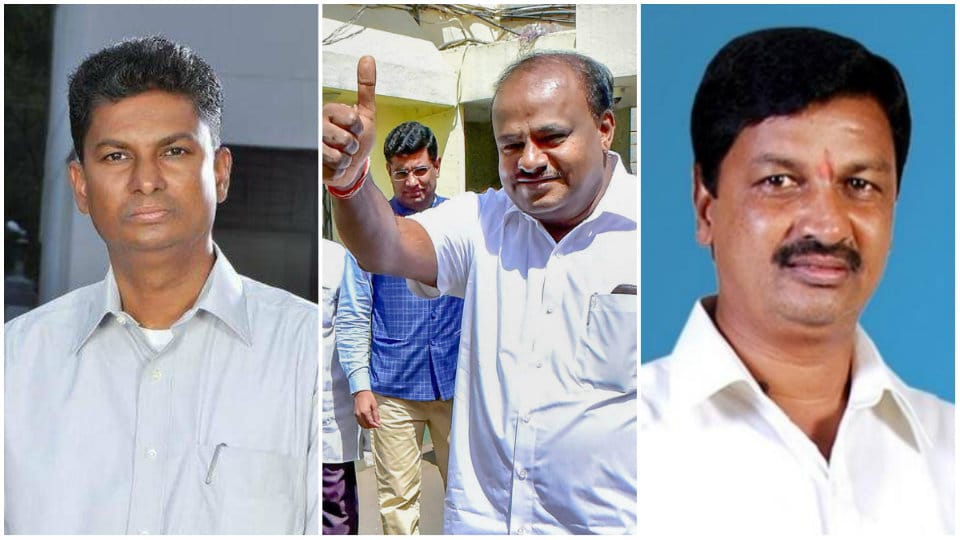 Bengaluru:  Even as the Belagavi impasse is refusing to die down with the Jarkiholi brothers — Minister for Municipal Administration Ramesh Jarkiholi and MLA Satish Jarkiholi — firm on their demands and reportedly expressing dissatisfaction with the solutions offered by the Congress leadership, Chief Minister H.D. Kumaraswamy, in a bid to resolve the row, reportedly held talks with the Belagavi Brothers at a hotel here this morning.

The Jarkiholi brothers, on Monday had remained firm on having their demands fulfilled, even as Congress Legislature Party leader and former CM Siddharamaiah tried to defuse the political crisis, but without much success. This morning, the Jarkiholis held a meeting with their supporter MLAs at a private hotel. Kumaraswamy, who came to know of the meeting, drove to the hotel and held talks with them. PWD Minister H.D. Revanna too joined later.

At the meeting, Ramesh Jarkiholi, the pointsman of the present political crisis, is said to have demanded a Deputy CM post to one of their supporters, a Cabinet berth for an ST MLA from Ballari district, exit of Water Resources Minister D.K. Shivakumar from Belagavi affairs and transfer of officials in the district.

But CM Kumaraswamy, while not giving any kind of assurance on any of their demands, is said to have advised the Jarkiholi brothers against taking any hasty decision, as it was a question of their (Jarkiholi) future political career, it is learnt.

MLA Satish Jarkiholi, later speaking to press persons, said that they had discussed issues pertaining to Belagavi politics and also on matters concerning their Assembly Constituencies.

Maintaining that they had not demanded a Deputy Chief Minister’s post as reported in a section of the press, Satish also dismissed reports that some MLAs supporting the Jarkiholi brothers were moving to a resort in Maharashtra.

Categorically stating that they would not go to any resort or elsewhere, he said that development of Belagavi was foremost and refused to divulge much on what transpired at the meeting with the Chief Minister.

Amidst all these developments, Satish Jarkiholi, who is said to have been summoned by the Congress High Command for a meeting with AICC President Rahul Gandhi at New Delhi tomorrow (Sept.19), is learnt to have cancelled his visit to Delhi.

Meanwhile, Badami MLA and former CM Siddharamaiah, who has been tasked by the party High Command to resolve the impasse, is scheduled to meet Rahul Gandhi at New Delhi tomorrow and discuss the Jarkiholi brothers’ issue.

Siddharamaiah, who is also the Chairman of the Co-ordination Committee of the ruling coalition, is likely to leave Bengaluru for New Delhi this evening.

2 COMMENTS ON THIS POST To “Karnataka political drama continues…: CM meets Belagavi Bros. in a bid to end impasse”