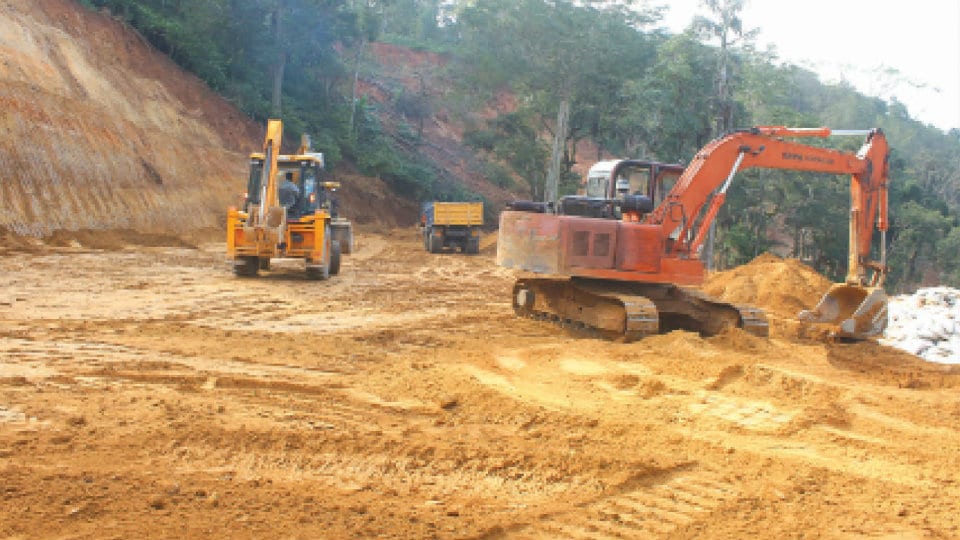 Madikeri: Even as Kodagu is slowly recovering from the recent devastation caused by floods and landslides, it seems that the State Government, taking advantage of the situation, is going ahead with the controversial Madikeri-Kadamakallu-Subramanya road works which was rejected by the Supreme Court’s Central Empowered Committee (CEC). The Rs.10 crore project cuts through areas that were devastated by the recent floods in Kodagu.

The Public Works Department (PWD), on Sept.7, had submitted a proposal for the diversion of 32 acre forest land to develop Madikeri-Kadamakallu-Subramanya Road at a cost of Rs.10 crore and a total of 11 km stretch (Vanachalu to Kadamakallu) will pass through Kadamakallu Reserve Forest, a part of Pushpagiri Wildlife Sanctuary. It may be recalled that the same proposal was rejected about five years ago. The proposal is to widen the 11 kms road from 4 mts to 12.5 mts.

Controversial Road Project: In December 2008, local leaders and public turned up at the spot with heavy machinery, cut trees, and cleared the road. The CEC, which looked into a complaint filed by Air Marshal K.C. Cariappa (retd.), found that the works was in ‘violation of the Forest (Conservation) Act, 1980, the Wildlife (Protection) Act, 1972, and the orders of the Court’ and had directed the then Chief Secretary (CS), who had accepted that the violations had taken place, to take action against officials responsible, and even suggested that action should be taken against three elected representatives who had instigated the illegal road works. In his letter, the then CS had even given an assurance that such instances will not occur.

An activist, who was involved in the legal action against the project a decade ago, says that the proposal was misleading as it states that it was only widening of a road. “There is no road there to be widened. It is a forest road, not one with right of way for public movement. Moreover, unscientific roads like this are major contributors for the landslips seen recently,” he said.

Meanwhile, a PWD official said that as the demand for the road was growing and with no “response” from the Forest Department, it was decided to submit an online application. “It is an important road and will serve as a short cut to Subramanya, and will save locals time. It needs to be upgraded to a Major District Road. Once we get permission, we can enumerate the number of trees to be cut,” he said.

But a senior forest official said, “During meetings with the District Administration, they have asked for the road to be revived. We have already rejected the road project once. They can apply for revenue land, but not forest land.”

Meanwhile, environmentalists, opposing the controversial road project that cuts through the reserve forest, said that Kodagu saw large scale devastation due to landslides caused mainly by deforestation. Having seen such examples recently, it is not wise to chop trees in the name of development and moreover, CEC had already rejected the same proposal earlier.

According to sources, when PWD Minister H.D. Revanna visited Kodagu after it was devastated by floods and several landslides, he had asked the officials concerned to submit a proposal to take up the controversial road project and hence, the officials had submitted the proposal.

READ ALSO  15 arrested for assault on Tahsildar at relief centre

Meanwhile, a senior Forest official said that no works have been taken up as the stretch of road passes through reserve forest.

Kandanakolli – Hattihole Road: Meanwhile, the road from Kandanakolli to Hattihole, which had collapsed due to landslide, is nearing completion and will be thrown open for movement of Light Motor Vehicles (LMV) from Thursday. The road works had begun from Sept.10 and a trial run of LMV has also taken place under the leadership of MLA Appachu Ranjan. More than 10 excavators, tippers and several JCB machines were pressed into service and the workers are slogging day and night to develop the road. A portion of a hill is being cut to make it into a road. BSR Company has been entrusted with the works and expert workers are rebuilding the road that had collapsed. The road is being permanently widened by 40 ft by using the latest technology along with hi-tech machines.

Trees on Kandanakolli-Haleri road, which were on the verge of falling down, have been removed and about 2.5 acre of land which had collapsed has been filled with mud from the hill and fattened using hi-tech machines.

Madikeri-Kandanakolli-Haleri-Hattihole road repair works is nearing completion and from Thursday, light vehicles, mini buses, school-college vehicles will be allowed to ply on this road. The workers involved in the road repair works, after seeing the recent devastation, are working day and night and I thank them.

The repair works are in final stages and the road would be opened for traffic in a few days after the Deputy Commissioner and senior engineers inspect the repaired road.

4 COMMENTS ON THIS POST To “Despite objections, State Govt. pushing for Madikeri-Kadamakallu-Subramanya road works”