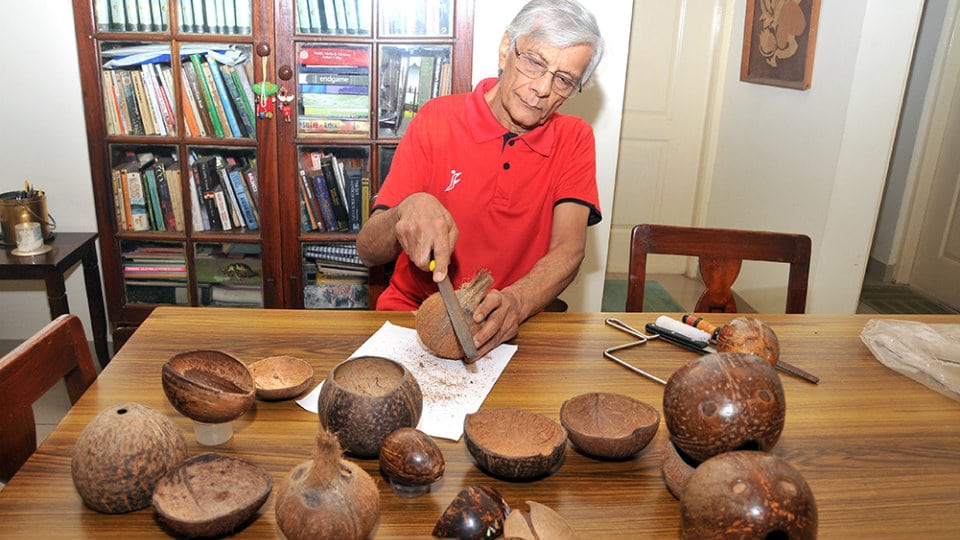 Coconut shells spring to life in this Septuagenarian’s hands

Coconut, without which most of the South Indian homes cannot do in their kitchen, has many other uses too. It is also called the ‘Tree of Life.’ One of the most attractive products made of coconut fibre is the coir carpets or mat made famous by the Coir Board. Still cricket matches are played on coir mats.

He is Arun Rao, 71, a resident of Yadavagiri. He is an expert in carving interesting objects out of the coconut shell like spoons, bowls, key chains and other items. He also makes masks, coffee cups, water jugs, kumkum boxes, many items that can be displayed in the garden. 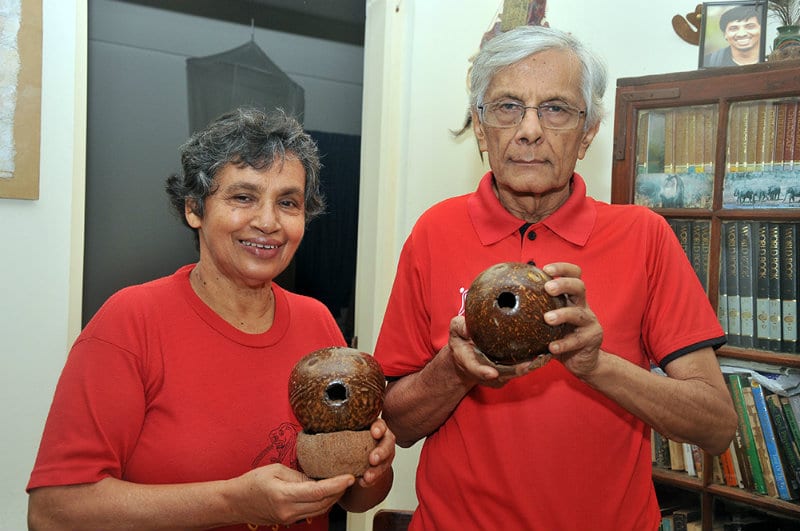 Arun Rao with his better half Seetha Rao.

Rao, who has always shown interest in carpentry, before he came to Mysuru worked in a bank in Chikmagalur and also in a pharmaceutical company. Later, he was a Product Manager in SK Lab and moved to Chennai.

There were many coconut trees there, in the house in which he lived. Once, while he was resting, he started wondering whether anything could be done from the fronds and the shell of the coconut. Indeed lot of things could be done out of the shell and other parts of the ‘Tree of life.’ “It was a magical moment for me when I realised how much I could do with the coconut tree,” said Arun Rao. 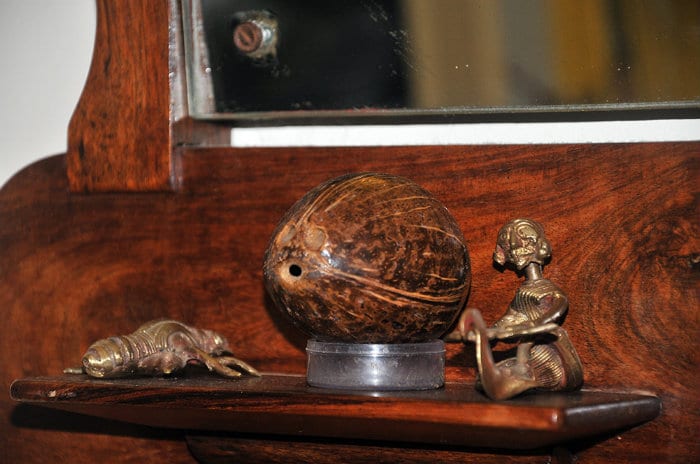 The inspiring moment spurred him on to involve himself in making products out of the material that is environment-friendly. “I have since then continued to work on these products,” he told Star of Mysore.

The joy of carving products out of the coconut gives me peace and a sense of dedication to a cause. “It is all the more pronounced when I start working on the hard shell, filing and carving it and the products spring to life, be it a cup, spoon or other products,” said Rao. 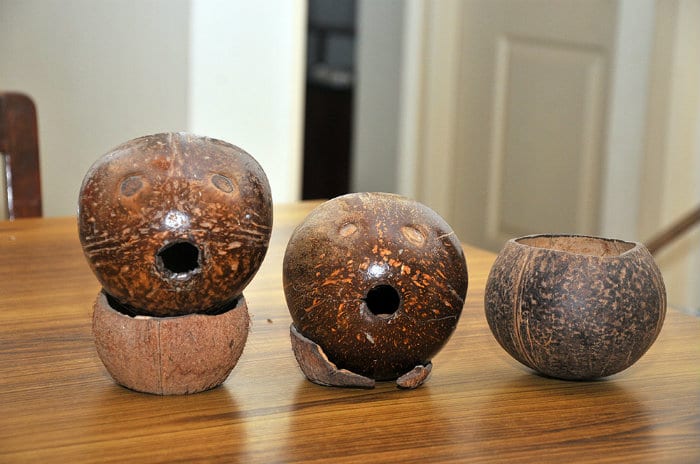 An eco-sensitive person, Rao said that instead of glass cups one could use the coconut shell cup in its place. The products can be used in the kitchen and the decorative items adorn the drawing rooms. “If these items are spoilt, then we ourselves can produce new items,” said Arun Rao and his wife Seetha Rao.

Rao reminds that our ancestors were only using coconut shell products, as there were no steel vessels those days. The message here is clear that coconut products are eco-friendly and that is what Rao wants to spread. 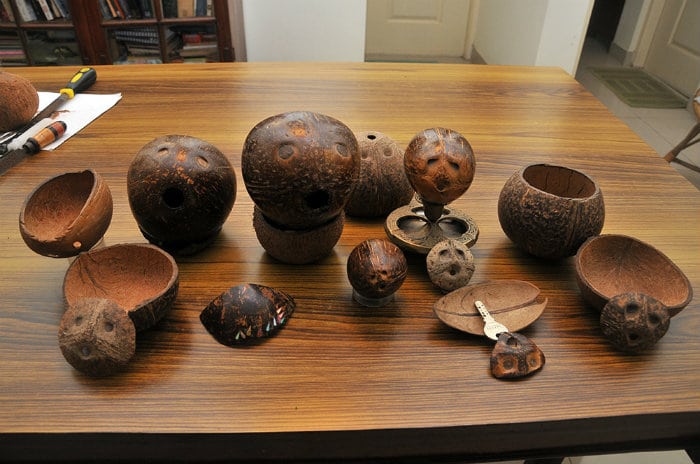 Arun Rao conducted a two-hour workshop at Nesara, the organic outlet in Chamarajapuram, a few days back. There were twelve persons who had enrolled. “This is the first time I was conducting a workshop. Everyone who participated was very impressed with what could be done with coconut. They saw a bowl being made right in front of their eyes and learnt how to make it. Even I was very happy imparting my skills to the eager learners,” signs off Arun Rao.

Even as her husband Arun Rao excels in the craft of carving coconut shells, the energetic Seetha Rao, is a champion swimmer. She has even swam the English Channel (made famous by the swimming legend Mihir Bose) between England and France in relay race. Holding a bunch of medals and a majority of them gold, Seetha Rao, 67, told Star of Mysore that though she had learnt swimming at a very young age, she took it up about 17 years ago. She has swum in FINA World Championship in America (2005) and in Sri Lanka in open water swimming in the ocean (2013). She has represented Karnataka in the Veteran’s category at the National- level championships 12 times. 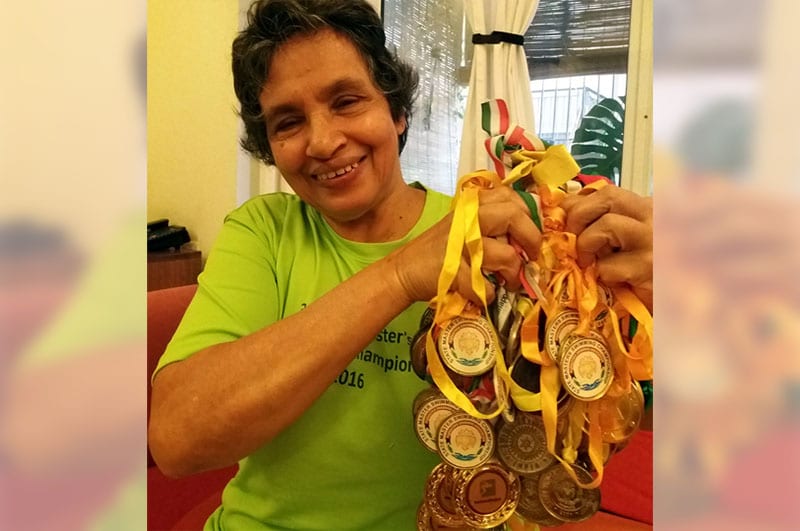 The Rao couple also helps the visually challenged by donating textbook records to the Blind Library.