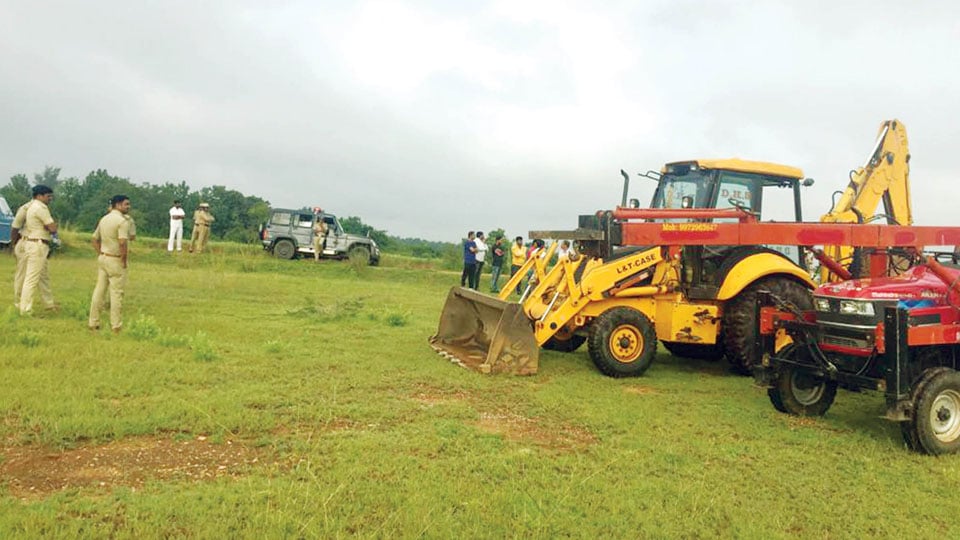 Rs. 100 crore Inland Container Depot to be set up at Kadakola by Container Corporation of India (Concor)

Mysuru:  The much-awaited and ambitious work on Inland Container Depot for Railways at Kadakola near Nanjangud by Container Corporation of India (Concor) began yesterday morning amidst tight Police protection as there was opposition to the project from farmers. The farmers who had parted with the land, for this project had demanded permanent jobs at the depot for one member of their families.

The daybreak operation began yesterday with more than 200 Police personnel and officials from Karnataka Industrial Area Development Board (KIADB). The officials gave a green signal and the ground-breaking works were taken up by earth movers. The project was supposed to begin in 2018.

The KIADB had acquired 55 acres of land in Survey Numbers 480-517 in 2011, 2012 and 2013 from 54 farmers. These 55 acres was allotted to Container Corporation of India to set up Inland Container Depot for the Railways. Concor has purchased 55 acres of land by negotiating at Rs. 35 lakh per acre.

The Depot will be on the lines of one which already exists at Whitefield in Bengaluru. Once the depot becomes a reality, it will be a big boost to industries. For Customs Duty, they need not go to Ports as all formalities will be done at the Depot and a separate office of Customs will be set up.

Apart from this, two Railway lines, loading line and engine escape line, will be set up. They will be controlled by Kadakola Railway Station. This would not only give a boost to exports from the region but also reduce the lead time taken to ship the containers to the Ports.

At present, most of the cargo meant for exports is sent to Chennai Port by road which adds to cost and time whereas the Concor facility at Kadakola will provide a safer and more reliable alternative to road. Products that are exported from the region include general engineering products, coffee, electronic items and agro-based products. The Depot will have good warehouse facility which will come up in an area of 1,000 sq.mts.

This will be the third Container Yard in Karnataka by Concor after Whitefield in Bengaluru and Mangaluru.

In the first phase of the work, 55 acres of land will be secured with proper fencing and the actual work of the project will start shortly after finalising the fresh tender as the earlier contract went in for arbitration as the work could not start due to farmers’ agitation since last year, KIADB and Concor  officials said.

Officials revealed that the Mysuru District Administration and KIADB have made arrangements to provide jobs to the family members of land owners (whose land has been acquired for the project) in nearby industries following five rounds of   negotiations.

The project envisages rail-siding, state-of-the-art warehousing, truck parking area besides facility for Customs clearances for export and import cargo. There is immense potential of starting almost 15 trains a month to various ports including Mangalore Port and Chennai Port immensely benefiting the Industries based in Mysuru and Nanjangud, officials said.